Ciudad Juarez: Dozens of asylum seekers crowded the US port of entry in the Mexican border city of Ciudad Juarez on Thursday (AEDT) after US President Joe Biden began his term in office by reversing many of his predecessor’s hardline immigration policies.

Some Cuban and Central American asylum seekers flocked to entry points, many carrying their belongings, hoping to end their waits in dangerous border towns where migrants can face extortion, kidnapping, and rape.

“I came to the bridge to turn myself in because I’m Cuban and I want to pursue a political asylum case in the United States,” said Angel Alejandro Segreo, 27. 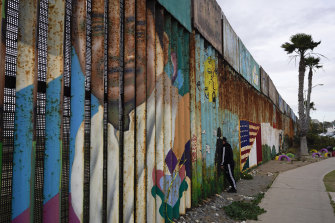 A man looks through the first wall at Friendship Park, near where the border separating Tijuana, Mexico, and San Diego meets the Pacific Ocean in Tijuana.Credit:AP

This time, Segreo and other first-time asylum seekers were turned away because of a public health order implemented in March 2020 at the outset of the coronavirus pandemic that allows US border agents to expel most border crossers for public health reasons.

Yet, even after being expelled back into Mexico, he and other asylum seekers expressed enthusiasm that their conditions would, sooner or later, improve under the new administration.

“I’m happy with the new president of the United States, but I want to see him do what he promised to do,” Segreo said.

In its first public announcement, Biden’s Department of Homeland Security said it would end all enrolments in a controversial Trump administration program – known as the Migrant Protection Protocols (MPP) – that since 2019 has forced more than 65,000 asylum seekers to wait in Mexico for their US court hearings.

The announcement did not specify what would happen to people currently in the program and only said they “should remain where they are, pending further official information from US government officials.”

Gustavo, a Honduran asylum seeker who declined to provide his last name at the advice of his lawyer, said he too was “optimistic”.

He said he had already spent a year and a half in Tijuana under MPP and that he was willing to keep waiting.

"I'm going to be patient," he said. "It's been very hard to live in Tijuana all this time, but we have a goal and we're not going to give up." 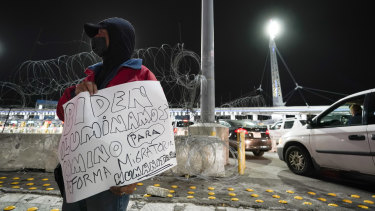 A man holds a sign during a vigil in support of migrants as he stands at the entrance to the San Ysidro port of entry along the US-Mexico border in Tijuana.Credit:AP

Mexico's former immigration chief, Tonatiuh Guillen, said in an interview that Biden's steps on his first day in office meant "the nightmare is over."

More actions that could affect asylum seekers and refugees are due to be announced by the Biden administration on January 29.

Christian Ariel Pereira, a migrant from El Salvador who travelled with his wife and four-year-old son and has been in Ciudad Juarez for four months, said he was hopeful.

“Just as I had faith he [Biden]was going to win, I also have faith he will fulfil everything he has promised,” he said.

US power and politics

Understand the election result and its aftermath with expert analysis from US correspondent Matthew Knott. Sign up here.