Australians vaccinated with the AstraZeneca vaccine have a 50 per cent chance of developing mild side effects, and one in four will need to take time off work, study, or their daily responsibilities after getting their first dose.

The latest findings from the national immunisation surveillance system AusVaxSafety should reassure the public that short-lived, mostly mild symptoms such as fever, headache, chills and muscle aches are common and expected. 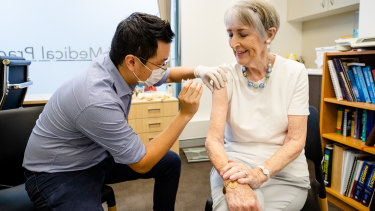 On Tuesday, NSW Health reported administering 813 COVID-19 vaccines in the 24 hours over the Easter Monday public holiday. That brings the state’s total to 127,339, not including the vaccines administered by the federal government’s GP and aged care programs.

Since the national rollout began on February 22, AusVaxSafety has tracked the safety of the Pfizer and AstraZeneca vaccines among Australia’s population using surveys of vaccinated people sent via text and email.

The data so far includes responses from people three days after their AstraZeneca shot, and three and eight days after the Pfizer shot.

Some 112,319 people had responded to the surveys by March 28 (51,648 from NSW), accounting for almost one in eight doses of COVID-19 vaccines administered in Australia so far.

Roughly half (49.7 per cent), and 1.2 per cent were worried enough to see a doctor or go to an emergency department.

Of the 31,786 people who received the AstraZeneca vaccine by March 31, just over two-thirds reported an adverse event (21,378 people), including 25.4 per cent who reported missing work, study or routine duties for a short period – the majority less than a day.

A total of 1.8 per cent of the vaccinated with AstraZeneca’s vaccine reported seeing a doctor or going to an emergency department in the days after their vaccination.

Fatigue was the most commonly reported adverse event for AstraZeneca (53.8 per cent) followed by headache (47.4 per cent), muscle or body aches (45 per cent) and injection site pain (44.9 per cent).

Associate Professor Wood said the types of adverse events and the rate that they are being reported were in line with findings of the vaccine clinical trials.

“If people know this, then they aren’t so shocked if they do experience these things in the first 24 to 48 hours after vaccination,” Associate Professor Wood said.

These are all symptoms that are known to occur after vaccination, are generally mild and short-lived, and some symptoms may be coincidental, the AusVaxSafety team said.

Associate Professor Wood suspected healthcare workers may be taking the day off after receiving the vaccine if they have any symptoms as a precaution to protect their patients and colleagues in case their fever or other symptoms were not caused by the vaccine but another type of infection they risked passing on.

“We’re hoping to look into this in more detail,” he said.

The COVID vaccines did appear to be a little more reactive than the seasonal flu shots, which was also predicted in the clinical trial.

The surveillance system has not found any reports of blood clots among its data collected on day three and day eight after participants received their AstraZeneca vaccinations.

But the timeframe for symptoms of the potentially serious and very rare blood clots to emerge was four to 20 days post-vaccination.

“There are other systems in place to pick up those clots,” Dr Wood said.

AusVaxSafety’s Victorian and Tasmanian data is limited, considering the states have their own separate data collection systems, but all datasets will soon be collated, Dr Wood said.

Get our Coronavirus Update newsletter

Stay across the news you need to know related to the pandemic. Sent Monday and Thursday. Sign up here.