Singapore: South-east Asia risks being ravaged by worsening natural disasters, according to a new report that warns the region is jeopardising the global push for carbon neutrality.

World leaders will gather in Glasgow in early November for the COP26 summit, regarded as vital for a consensus to be reached on emission reductions that could limit global warming to 1.5 degrees. 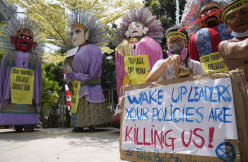 But only two ASEAN countries – Indonesia and Laos – have set firm targets for net-zero emissions and the region risks “being left behind if we do not act now”, says a report by Bain and Co, Microsoft and Singapore’s Temasek on south-east Asia’s green economy.

“Put simply, the world cannot achieve net zero without SEA coming along on the journey,” the report said.

Home to more than 650 million people and 15 per cent of the world’s rainforests, south-east Asia is already on the frontline of the climate crisis, with elevated exposure to cyclones, tsunamis, floods and volcanic eruptions.

The Intergovernmental Panel on Climate Change in August predicated dire consequences in the region if warming rose beyond 1.5 degrees over pre-industrial levels, as scientists fear it will do by the early 2030s, with rising sea levels, heat waves, drought and flooding threatening greater devastation.

The new report, pitched at multinationals’ supply chains and investors as well as governments, says regional economies will be hit hard in the future by climate shocks “unless it takes decisive and timely action”.

It credits recent announcements including Indonesia bringing forward its net-zero goal from 2070 to 2060, the Philippines stopping new coal power plants being built and the likes of Singapore and Thailand outlining national green plans.

“However, SEA is not on track, and there is a lot of work to do,” it says, calling for the transition from fossil fuels to green energy to be sped up and urging transformation of the food sector.

The report says $US2 trillion ($A2.8 trillion) of investment in clean energy over the next decade is required for south-east Asia to properly tackle its reliance on natural resources, with only $US9 billion ($A12.5 billion) in capital channelled into renewable energy businesses and assets in 2020.

President Joko Widodo, who has ambitious plans to shift Indonesia’s capital from Jakarta to Borneo because of the metropolis’s vulnerability to rising sea levels, has flagged making the green economy a priority when the country takes over the G20 presidency next year.

Joko’s crackdown on logging and new palm oil plantations has reduced forest fires and rates of deforestation – the top contributor to Indonesia’s greenhouse gas emissions – and his government has also proposed a new carbon tax.

However, Indonesia doesn’t plan on phase out coal-powered plants until the 2050s, even if China’s decision last week to stop financing new coal projects abroad looms as a global game changer.

Joko’s government in September also terminated an agreement with Norway, which had struck an incentive-based deal to pay Indonesia $US1 billion ($A1.4 billion) a year to protect its rainforests to reduce carbon dioxide emissions. 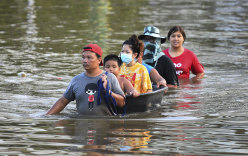 Thai people wade through floodwaters in Chaiyaphum province, north-east of Bangkok, on Tuesday.Credit:AP

Norway’s failure to stump up the cash was given as the reason for the agreement being ripped up but the Indonesian government said it would not change its commitment to bring down emissions.

“Indonesia has recorded significant progress and achievements to fulfil its obligation under the Paris Agreement, which has been ratified,” Indonesia’s foreign ministry said as the ending of the deal was announced.

“Indonesia’s achievement can also be seen, among others, on the lowest rate of deforestation in the past 20 years, including the significant reduction on forest fires.”

Malaysia, which alongside Indonesia produces more than 80 per cent of the world’s palm oil, said this week it was committing to being carbon neutral “by 2050 at the earliest”.