Organisers of the Tokyo Olympics have refused to rule out cancelling the event just three days before it is due to start amid concern over rising Covid cases.

Toshiro Muto, head of the organising committee, was asked directly at a press conference on Tuesday whether the showpiece event – which has cost Japan some £12billion – could still be called off, and refused to rule it out.

It comes as the number of Covid cases linked to the Games rose to 71 with infections in Athletes’ Village, and two more sponsors announced they will not be sending representatives to the Opening Ceremony due to local anger.

‘We can’t predict what will happen with the number of coronavirus cases. So we will continue discussions if there is a spike in cases,’ said Muto. 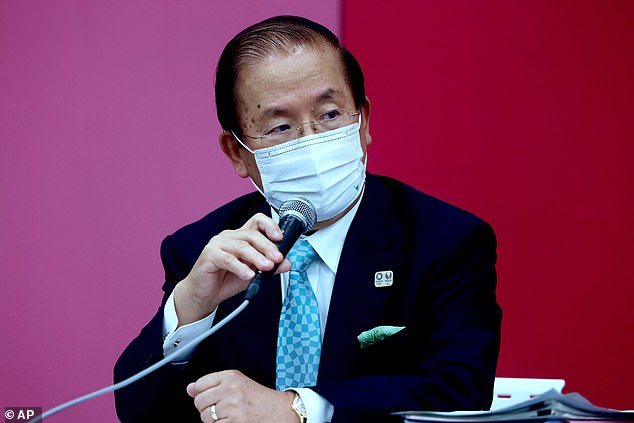 Toshiro Muto, head of the Tokyo organising committee, was asked at a press conference whether the Games could still be called off and said meetings will take place later this week

‘We have agreed that based on the coronavirus situation, we will convene five-party talks again. At this point, the coronavirus cases may rise or fall, so we will think about what we should do when the situation arises.’

COVID-19 cases are rising in Tokyo rising and the Games, postponed last year because of the pandemic, will be held without spectators. Japan this month decided that participants would compete in empty venues to minimise the risk of further infections.

The opening ceremony will also take place without major Olympic sponsors, the companies said on Tuesday, dealing another blow to a slimmed-down Games as more athletes tested positive for the coronavirus.

Muto, a former top financial bureaucrat with close ties to Japan’s ruling party, is known for his careful choice of words, while organisers are facing a domestic public angry about coronavirus restrictions and concerned over a possible spike in cases triggered by Games attendees arriving from abroad.

The number of cases now linked to the Games stands at 71, after 13 positive tests were reported on Monday.

They include two athletes – Czech volleyball player Ondrej Perusic at the Athletes’ Village in Tokyo and US gymnast Kara Eaker at a training camp in Chiba prefecture.

Both are now in a 14-day quarantine which for Perusic will cover all three of his scheduled games with partner David Schweiner.

Another case affected an unnamed ‘games-concerned personnel’, which includes team coaches and staffers. Officials said the person is staying in Tokyo but not at the Athletes’ Village.

The other tests were spread out across Japan and included Games contractors and a volunteer.

It comes against the backdrop of Covid cases rising in Japan overall as a fourth wave of infection driven by the Delta variant hits, with Tokyo in a state of emergency and large gatherings banned.

That has led to public anger directed at the Olympics, with polls showing a majority of Japanese do not support the event going ahead while cases are not under control.

As public anger builds sponsors have become nervous about their association with the Games, with Toyota saying Monday that it will not air any Olympic-themed TV ads during the event and will not send a representative to the Opening Ceremony.

The company was joined on Tuesday by Fujitsu and NEC Group, which also said they will not send company representatives to the ceremony – if it goes ahead.