New Zealand Prime Minister Jacinda Adern has risen above a petty jibe about her appearance on a live video chat discussing how the country is battling Covid.

Nine minutes into the serious discussion, which included travel restrictions and the safety of vaccines, Ms Ardern read out a comment posted by a viewer.

‘Amanda thinks I’ve aged. Merry Christmas to you too Amanda,’ the Prime Minister told her.

Her classy response was quickly backed by other commenters, who took swipes at Amanda for her remark. 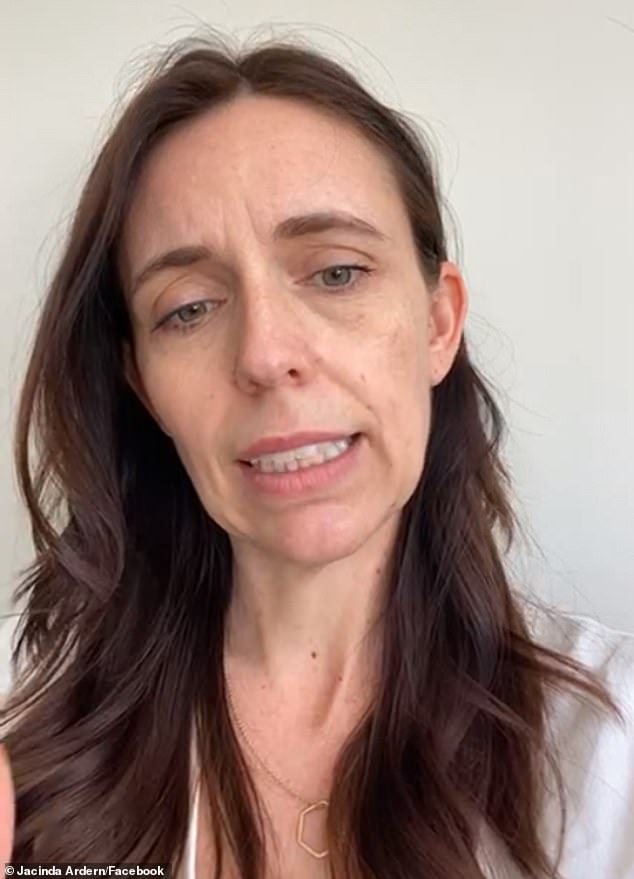 ‘Amanda, did you get that personal message? Because Jacinda was far more polite than I was when I read your note. You get more from honey than from vinegar,’ one person responded.

Before she was so rudely interrupted, Ms Ardern used the Facebook live chat to respond to misinformation around the New Zealand government’s plan to tackle the Omicron variant.

On Tuesday, the country’s Covid-19 Response Minister Chris Hipkins revealed the precautionary measures introduced to lower the risk of the far more contagious variant getting into the community.

One of the measures is rolling out a version of the Pfizer vaccine to children aged five to 11 from January 17.

Ms Ardern said she would speak on this directly because there has been a lot of misinformation about it online.

‘The decision over whether or not someone’s children is vaccinated is a parent’s or caregiver’s. It absolutely requires your consent.

‘There is no mandate around children being vaccinated – it is up to a parent or caregiver. So I just thought I would make that nice and clear again.’

Some commenters were concerned about the PM’s own health after she coughed several times in the video. 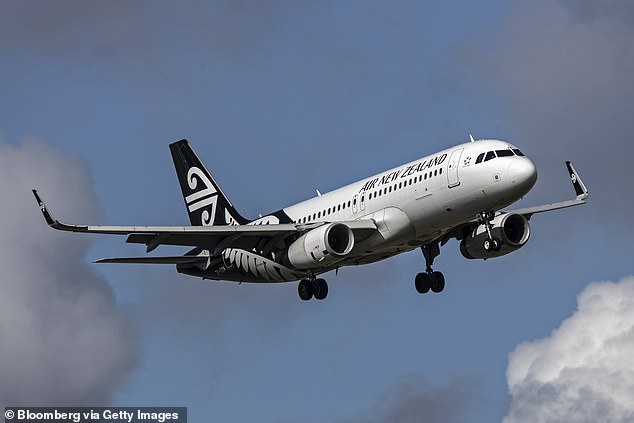 ‘I can assure you I’m very, very well and healthy. I just swallowed down the wrong – down my windpipe so excuse the little cough there for a minute,’ she replied.

Earlier, Ms Ardern had sparked an angry backlash after a Christmas Facebook post backfired with furious Kiwis raging over her travel ban.

She posted a picture of a knitted gingerbread house and told the story of how it came to be a Christmas tradition for her family over the past 30 years.

But it provoked a furious reaction from fed-up New Zealanders facing a second Christmas cut off from their families by the latest Covid restrictions.

Now the planned easing of travel restrictions from January 17 has also been pushed back to the end of February, bringing fresh heartbreak for Kiwis trapped overseas. 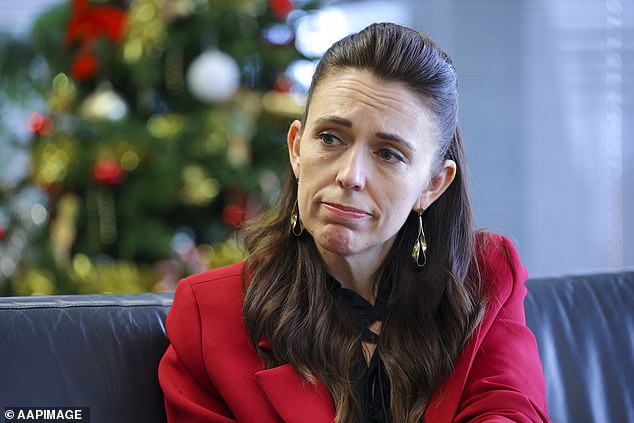 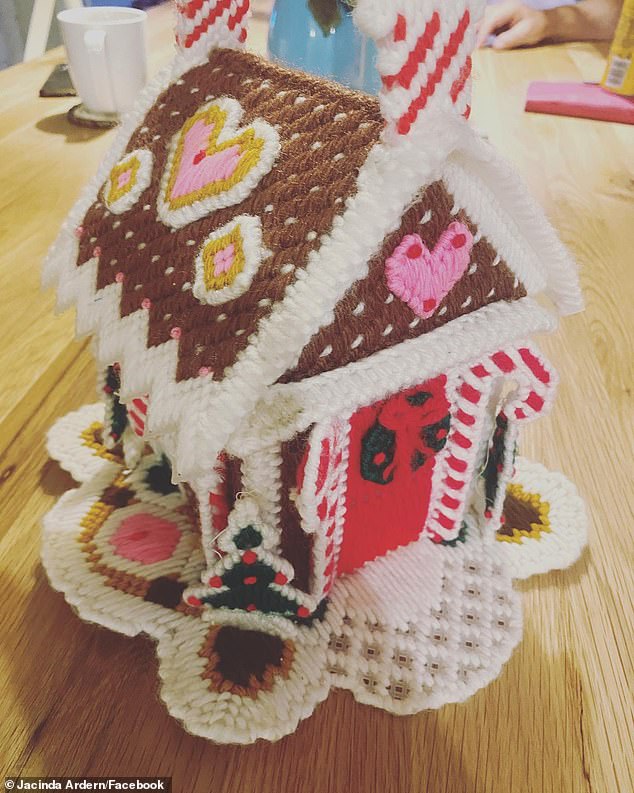 Ms Adern revealed on social media how her tour guide father was gifted the knitted ornament by a US tourist when she was a child, and how it had been brought out every Christmas since.

‘Anyone else have Christmas decorations, that when you see them, bring back a bunch of memories?,’ she wrote.

‘This gingerbread house would have to be at least 30 years old. When I was a kid, my father used to work an extra job taking tourists around New Zealand.

‘On one of his tours, a woman sat on the bus crafting. At the end of the tour she produced this. It’s come out every Christmas ever since.

‘I’m not sure Dorothy the crafter from the United States would still be around, but this gift has been very well loved!’

The Christmas memory prompted an angry response from some though.

‘Tonnes of memories and traditions like that,’ posted Sandra Grigg. ‘Unfortunately for the second year running we are unable to share them with our family in NZ, or bring our babies home to meet their grandparents.

‘Your decisions have caused heartbreak the world over. So yeah….Merry Christmas to you.’

Miranda Guthrie added: ‘Hope you enjoy Christmas with YOUR family unlike so many New Zealanders who will be facing another one without theirs.

‘You and your government should be ashamed of treating them like untrustworthy criminals – you’re tarring everyone with the same brush and forcing this lunatic process on our beautiful and ever more divided country.’ 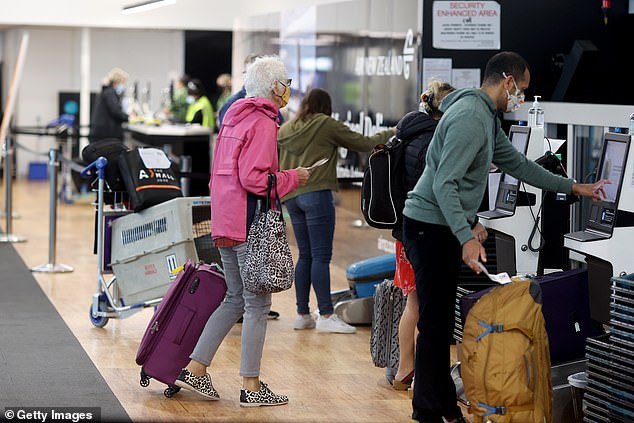 The uproar comes after the government delayed a move to allow self isolation at home for international arrivals and an end to Managed Isolation and Quarantine (pictured, domestic travellers checking in Auckland Airport)

The uproar comes after the government delayed a move to allow self-isolation at home for international arrivals and an end to Managed Isolation and Quarantine.

Travellers currently need to get an MIQ voucher before they can fly to New Zealand and numbers are strictly limited.

Countless Kiwis have been stranded overseas while they wait for an MIQ spot and had hoped the relaxed restrictions in January would allow them to finally fly home.

As well as delay to the relaxed restrictions, even those flying in with MIQ vouchers will now have to spend even longer in quarantine, back up to 10 days. 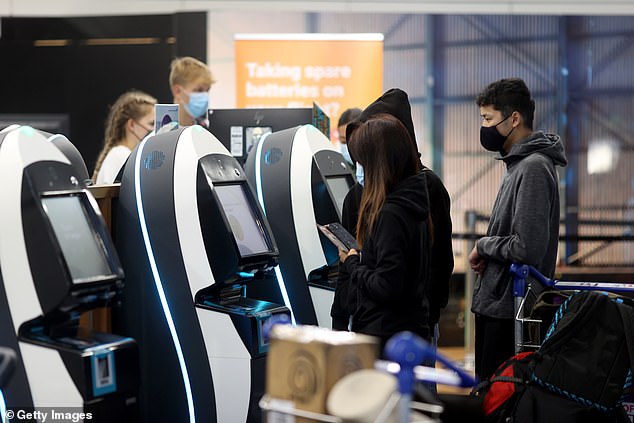