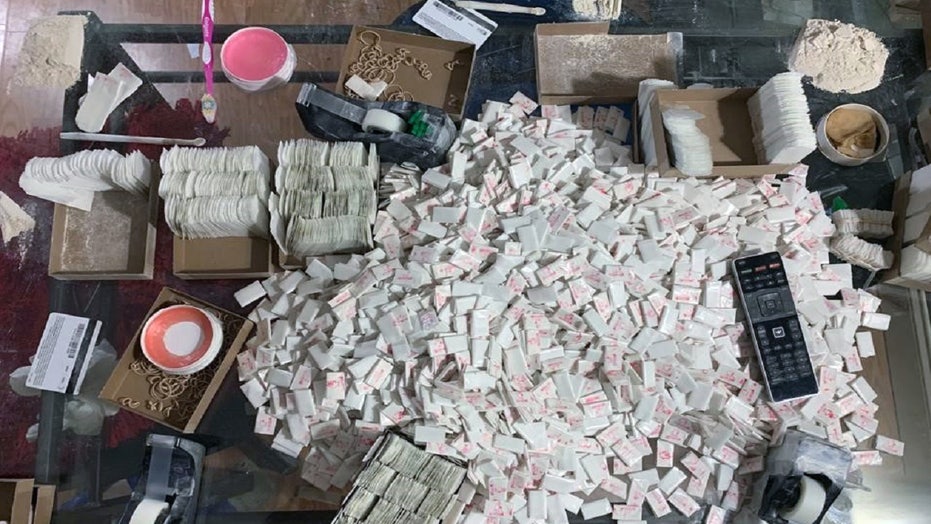 Police and law enforcement dismantled a massive drug-packaging mill in New York City when they arrested an alleged “major trafficker” and three others and discovered an estimated $12 million worth of heroin strewn throughout a Queens bedroom, officials recently announced.

The New York Offices of the U.S. Drug Enforcement Administration (DEA), Homeland Security Investigations, and local and state police announced Wednesday that agents who were conducting surveillance earlier in the week ultimately tracked down the 86-pound heroin haul, an estimated 1,000 fentanyl pills, $200,000 cash and four suspects.

“This takedown will have devastating effects on this high-level opiate operation throughout the tristate area,” said Peter C. Fitzhugh, special agent in charge of HSI New York, in a prepared press release. “Not only do the seizures represent dollars lost for the organization, but more importantly, lives saved in our communities.”

DEA Special Agent in Charge Ray Donovan called it “a highly sophisticated heroin mill in the heart of” Queens. 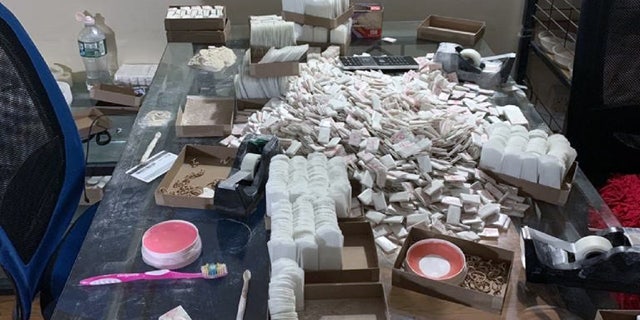 Agents were conducting surveillance in the Ridgewood neighborhood of Queens around 4 p.m. Monday when they spotted alleged suspected narcotics trafficker Luis Martinez walking out of an apartment building and carrying a backpack. They stopped him and discovered he was carrying $200,000, four cell phones and keys to get inside the building, officials said.

When authorities ultimately gained access to the building and knocked on the door, a woman answered and agents discovered a type of bag used to wrap drugs and “heard noises coming from behind a closed door,” according to officials.

Authorities searched further to find two other women allegedly hiding in a bathroom with the lights off and a bedroom that appeared to have been dedicated completely to packaging heroin.

“Inside the bedroom, agents and officers found 31 pressed, brick-shaped packages wrapped in duct tape, each allegedly containing a kilogram of heroin, and an additional six kilograms of loose powder inside plastic containers and zip-lock style bags,” a DEA press release said. “A tabletop held approximately 100,000 individual dose glassine envelopes filled with heroin, as well as empty envelopes and stamps.”

Photographs provided by the DEA show the extent of the operation, which Special Narcotics Prosecutor Bridget Brennan described as “an assembly line able to pump out millions of street ready heroin packages and deadly counterfeit fentanyl pills.”

Martinez, 48, was charged with operating as a major trafficker. He and the three women who were inside the apartment – identified as Sofia Medina, 50; Maria Altagracia Berroa, 54; and Jacqueline Sosa De Espinal, 43 – were also charged with two counts of criminal possession of a controlled substance and criminally using drug paraphernalia, officials said.

The national opioid crisis has only picked up steam in 2020, with the Centers for Disease Control and Prevention (CDC) finding that overdose deaths were “accelerating” during the novel coronavirus pandemic.

CDC data released in mid-December found that more than 81,000 people died from drug overdoses over the one-year period ending in May 2020 – the highest number that the agency had ever recorded over a 12-month period. Overdose deaths were on the rise even prior to the pandemic, the CDC said.

The teen was pronounced dead on Sunday after his mother discovered him unconscious in the bedroom of his Santa Monica, Calif., home shortly before 4:30 p.m. local time, police and reports said.

In a heartbreaking post shared on her Instagram, Berman explained how they have reason to believe he suffered a drug overdose.

“My beautiful boy is gone. 16 years old. Sheltering at home,” she wrote in a caption paired with a photograph of her and Sammy. She later added: “My heart is completely shattered and I am not sure how to keep breathing. I post this now only so that not one more kid dies.”

Berman wrote that she and her husband learned their son had been messaging with a drug dealer via Snapchat and is suspected to have taken drugs, possibly Xanax or Percocet, that were laced with something more dangerous than he realized, likely fentanyl.

“I know he did not know he was taking fentanyl. He was not interested in that; he was scared of it,” she told Fox News on Tuesday. “He did not actively understand addiction and did not want to be addicted yet, unfortunately, most American teenagers experiment in these fentanyl-laced, supposedly relatively innocent experimental drugs.”