Home » Not like CSI: How pathologists really rebuild lives after death

We all remember our sliding-door moments, but few can match David Ranson’s. He was cutting into a body when the chap next to him made a suggestion that would change his life.

He was elbow-deep in an autopsy as part of his final forensic pathology exams in London. The postgraduate student working on the next table was Dr Charles Naylor, who was about to move to Brisbane (he is now Queensland’s Chief Pathologist).

Ranson said he also planned to work overseas for a few years to gain experience. Naylor said Melbourne was about to revamp its service and the man entrusted with the job was Stephen Cordner, who just happened to be in London to give evidence at an Old Bailey court case. 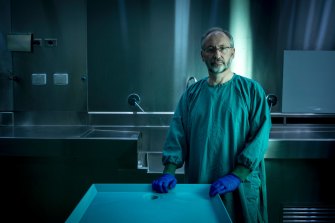 Naylor had worked with Cordner in an English hospital and made the appropriate introductions. After a phone call and a chat over coffee, Cordner encouraged Ranson to apply for the job.

He was accepted and arrived in early 1988. He has remained ever since.

Professor Ranson is head of Forensic Services at the Victorian Institute of Forensic Medicine. He and Professor Cordner were pivotal in modernising a service that was, frankly, a disgrace.

The city mortuary was connected to the Coroner’s Court at the Flinders Street extension. In the courtroom, grieving relatives would sit to hear the details of death, often accompanied by the noise and smell of autopsies being conducted next door.

It was said back then that if one of the pathologists wanted a second opinion, he asked the veteran cleaner who for years had washed out the autopsy room.

A few years earlier, a homicide detective took me there in the early hours for a rite-of-passage visit. It had been a bad weekend on the roads and naked bodies were stacked on one metal trolley.

Ranson arrived as they were preparing to move to the new building in South Melbourne which remains headquarters today, and where dignity in death is as important as the science of discovery.

He also started work as police were killing suspects at an unprecedented rate.

Still relatively the new boy, he was sent to Narre Warren on October 11, 1988, after members of the armed robbery squad shot dead suspect Graeme Jensen in a botched attempted arrest. 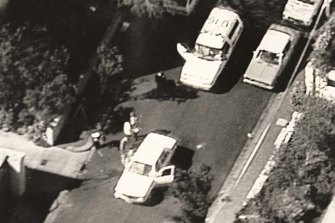 The scene of the Walsh Street murders, South Yarra, in which police officers Damian Eyre and Steven Tynan were killed.Credit:The Age

After a few hours’ sleep, Ranson arrived at Walsh Street. The abandoned Commodore used to lure the patrol to the street and the police van were still there.

“Some scenes you don’t forget,” he says. “Walsh Street was haunting. The two abandoned cars were still there. It was quite eerie.”

He says the role of a pathologist in criminal investigations has been hijacked by television, where the expert is portrayed as part medical examiner, part prosecutor and part detective.

“When I started, you could go to court and the jurors and barristers knew what we do. Now I must explain what a forensic pathologist does and, more importantly, what they don’t do.

“This is because they watch the TV shows and see the forensic pathologist out there, interviewing suspects and engaging with police in very strange ways.

“Juries want to know why wasn’t this sniffer test done or this laser test done? Nine times out of 10, all you need is some rubber gloves and a knife.” 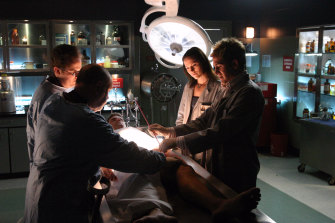 The pathologist’s job is not to find out who done it but what happened. The police deal with suspects, the pathologist with the victim. “We rebuild the past,” says Ranson.

“A forensic pathologist is working for the courts and justice, not just the police. They are working for the prosecution and the defence — all the players in the system.

“If I look at the homicide cases I have done, the cause of death in 99 per cent of the cases has been bleeding obvious.”

The pathologist can find medical clues as to how it happened, confirming or debunking possible alibis. “I was cleaning my gun and unfortunately it went off and popped this person over there. Of course, they were shot. The questions include: Were they standing over there, were they lying on the floor and did they receive a blow to the head before they were shot?”

Ranson makes himself available at least an hour before court to chat to defence lawyers if they want a briefing on the pathology evidence.

In one country case where the victim died from a crush injury, the defence barrister planned to argue the death may have been due to a fall rather than a blow.

“Before court, he suggested we go for a walk. We went around the block. By the time we came back, he said he thought his client would change his plea to guilty,” says Ranson.

He says crime scenes can provide vital evidence as to how events unfolded.

In 2002, James Huynh, 19, was chased more than 300 metres along Chapel Street, South Yarra, from the Salt Nightclub by a group of men. He was stabbed and hacked to death, and his two cousins, Viet and Nam Huynh, drowned in the Yarra trying to escape.

“I walked the scene to the body at the river,” Ranson says. “I saw the blood on the walls and on the pavement. I am not a specialist at blood splatter by any means, but it was incredibly informative as to how much blood was lost when and where. That context helped me when I was in the witness box later.”

The pathologists who work at the Victorian Institute of Forensic Medicine are a different group of cats. You would think those who spend so much time with people who have died in strange and violent circumstances would smell of embalming fluid and make Dracula look like a stand-up comic (“a funny thing happened on the way to the Blood Bank”).

Instead, the ones I have met are full of enthusiasm and optimism. One said it was all about job satisfaction: As long as you believe what you do matters, you can deal with the rest.

Ranson agrees but says you need to develop your own coping mechanisms and to have a life away from death. He is a long-standing tenor in the Victoria Chorale and an enthusiastic ham radio operator.

A family life well away from the autopsy room helps. After repeated phone calls to home about the donor tissue bank, his young daughter asked why daddy was providing boxes of tissues on the side.

“People have different capacities to cope – it is partially genetic and partially upbringing and experience,” he says. “You see some pretty terrible things but doing the job is less stressful than watching it on TV. We are a collegiate group of people. Loners suffer far more in my experience than people who share and listen.” 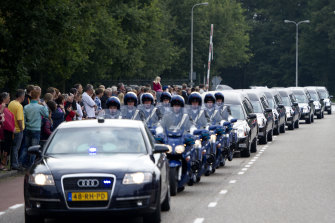 Hearses carry the bodies of the MH17 victims from Eindhoven Airbase to Hilversum on July 25, 2014.Credit:Getty Images

Ranson was one of the international experts sent to deal with the devastation of MH17, the Malaysia Airlines flight shot down over Ukraine in July 2014 with the loss of 298 lives.

He remembers the “incredible respect” shown by people in The Netherlands, flowers stretching hundreds of metres and the precision procession of hearses repatriating the bodies.

And he has worked at war crime sites with international teams. “In Kosovo, we worked in a Soviet-type hospital in a society that had largely broken down. People were burning rubbish in the streets and traffic lights were not working.” The service was so basic, they used a British Commando to identify bullets taken from victims.

To stop being overwhelmed at the 2004 Thailand tsunami, Ranson says, you had to focus on the task directly in front of you. “There may be 3000 dead and you might deal with 20 or 30 cases. If you understand you are just a small cog and if you introduce some technique or method that can be used by others, then it is worthwhile.” 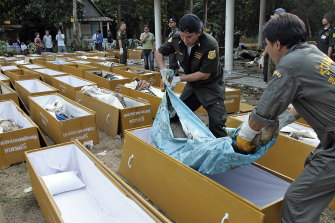 Dealing with hundreds of cases following the 2009 Black Saturday fires, Ranson said the VIFM teams refused to work around the clock, partially with an eye to staff welfare but also out of respect to the victims.

“There is no point going like a bull in a china shop. You have to have the confidence that if you don’t immediately know the answer, you can find it.”

The same goes for a murder investigation; there can be pressure to come to conclusions quicker in high-profile cases and sometimes the well-meaning can get in the way of evidence gathering.

When he started, “the gold braid would arrive at a homicide scene and didn’t have much to offer. When they stayed outside and exercised proper command, they were effective. When they started to get into the nitty gritty, something they hadn’t done in 20 years, they were in the way”.

He adds: “Forensic pathology is not about deduction, it’s about construction. There are always better ways of doing things.”

Ranson is slowly moving from the knife and rubber gloves to a teaching role.

“We are doctors, and we are trying to do the best for people and the community. We hold up the mirror to show what is going on in society.”