NOT A SINGLE worker has turned up to Labour council’s brand-new £48million HQ post-lockdown – as local authority admits to making NO efforts to get 1,000 staff back

A Labour council that spent tens of millions of pounds on brand-new offices has not had a single employee return to work since lockdown restrictions were lifted.

The startling revelation comes as a Mail on Sunday audit of local authorities across the country found most council staff are still working from home, despite government advice for people to get back to the office.

Of the 30 councils that responded, one admitted it was making no efforts to get its staff back – Tameside Metropolitan Borough Council in Greater Manchester.

Not one of its 1,000 staff has yet to return to its brand-new £48 million office in Ashton-under-Lyne – and chiefs have no plans to encourage a return to normal working conditions. 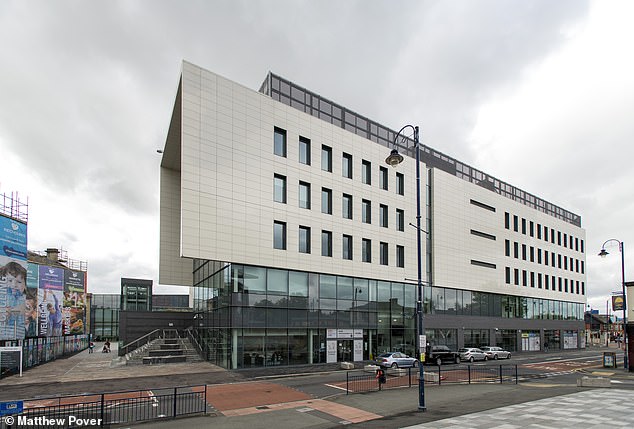 Pictured: The Tameside One building that houses the Tameside Metropolitan Borough council offices in Ashton-under-Lyne, which is yet to have an employee return

In May, in a sign to council taxpayers of how comfortable Tameside staff had grown to working from home, the local authority’s chief executive Steven Pleasant, who commands a £210,000 annual pay package, tweeted a picture of his slippers.

The continued policy of working from home comes a year after the Labour-led council unveiled the new 160,000 sq ft office.

Doreen Dickinson, leader of the Conservative group at Tameside, said: ‘Council employees should definitely be going back to work to support the local economy if nothing else.

This is a brand-new, supposedly state-of-the art office, which should be able to accommodate employees.’ A spokesperson for the council said: ‘Approximately 1,000 staff are working from home. Our current policy is for staff to continue working from home.

‘No council services have been cut or adversely affected by the expectation to work from home.’ 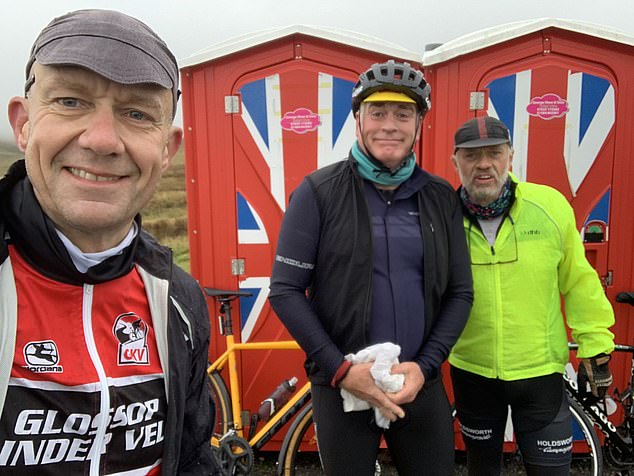 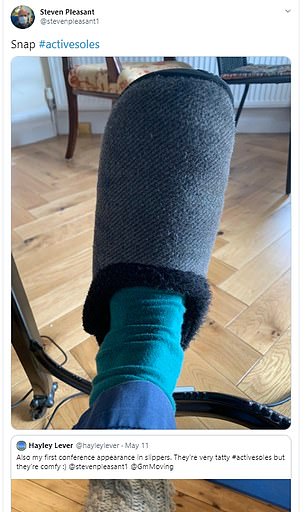 Pictured: Steven Pleasant shared a picture of his slippers on his Instagram page

Elsewhere, in Hammersmith and Fulham, 1,700 employees normally at their desks are still working from home and only 380 employees have returned to the office.

A spokesman claimed the council is ‘championing a digital economic recovery and working hard to avoid a miserable second lockdown’.

In many cases, the reason for continuing to work from home was because Covid rules dictate fewer people should be allowed in the office at one time.

Brighton Council claimed that their office capacity was reduced to just 20 per cent of what it had previously been.

They added: ‘We are reviewing our office capacity in mid-September to decide on next steps.’

Meanwhile in Slough, the council’s communications manager Kate Pratt inadvertently replied to the MoS request with an email clearly intended for colleagues, telling them: ‘Ignore this one again.’

So much for back to the office! Civil servants are ‘making a mockery’ of Boris Johnson’s push to get people back to their desks by advertising ‘work from home only’ jobs

By Anna Mikhailova Deputy Political Editor for The Mail On Sunday

Civil servants are making a ‘mockery’ of Boris Johnson’s push to get staff back into the office by advertising ‘work from home only’ jobs, MPs said last night.

While Ministers have ordered officials to return to their desks, Whitehall departments are putting up recruitment adverts saying office work will not resume any time soon. MPs said this ‘deliberately undermines’ Government efforts to get Whitehall working.

The Ministry of Defence, the Department of Health, Public Health England and the Food Standards Agency are among those advertising work from home only jobs, The Mail on Sunday can reveal.

One advert reads: ‘Due to the ongoing Covid-19 situation, you will initially be required to work from home with no travel required.’ 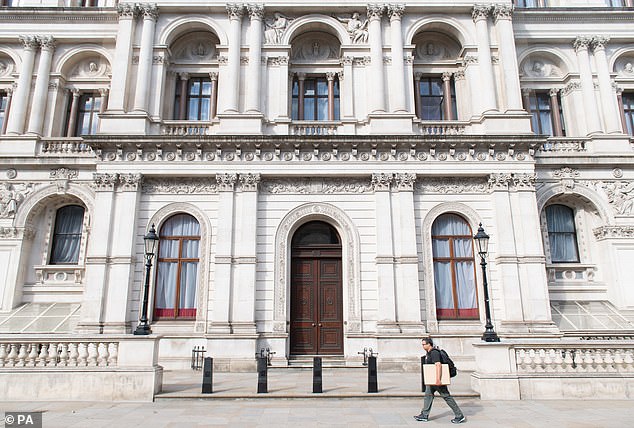 A man walks past the Foreign and Commonwealth Office, on Whitehall. MPs have accused the Civil Service of making a ‘mockery’ of Boris Johnson’s push to get staff back into the office by advertising ‘work from home only’ jobs

Applications for the jobs close in mid or late September, suggesting Whitehall has plans to continue working from home for months.

Steve Baker, the Conservative MP, said: ‘What an extraordinary situation. Public service extends to leading the country in the right direction at all levels. And that should mean Civil Service hiring managers planning to bring people into their offices.

‘How anyone could be pulling in the wrong direction like this, at this time, I really cannot imagine.

‘It makes a mockery of Ministers and backbenchers trying to encourage our constituents back to work. Michael Gove [Cabinet Office Minister] and Dominic Cummings [the Prime Minister’s senior aide] need to get a grip and persuade the Civil Service to set an example.’

Last week the Cabinet Secretary wrote to all Whitehall ministries setting a target to get 80 per cent of staff to attend their usual workplace each week by the end of September.

However, a Ministry of Defence job advert seen by the MoS says it ‘will require home working until such a time as we are able to safely return to the office’ while a Department of Health and Social Care job calls for ‘ideally’ one day a week’s work in the office or ‘remote working as agreed with line manager’.

An advert for a job with the Office for Budget Responsibility (OBR), a quango, says: ‘The post will be based in London once Covid-19 restrictions on our office capacity have been removed. In the meantime all OBR staff have been working remotely.’ 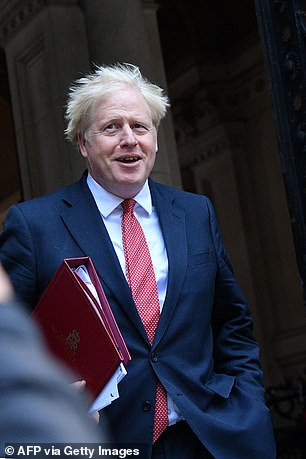 Richard Holden, the Conservative MP, said: ‘With adverts like this it looks like the Civil Service are deliberately undermining the efforts of the Government to get the country back to work and our economy moving again. Nothing makes the argument that broad reform is clearly needed better than the Civil Service going against clear Government policy.’

Yesterday Dave Penman, General Secretary of the FDA union, which represents civil servants, accused the Government of ‘virtue signalling’ by calling for civil servants to get back to their desks.

It comes as MPs have their right to claim for travel around London removed in a push to get them to use public transport.

From tomorrow MPs will no longer be able to claim for commuting costs between their London home and Parliament.

The Independent Parliamentary Standards Authority, the expenses watchdog, said the measure was designed to help MPs avoid public transport during the height of the pandemic, but that ‘the circumstances have changed significantly’.

A Government spokesman said: ‘The Civil Service prides itself in being a flexible employer and has offered elements of homeworking across the service for many years. This has not changed.

‘We are clear that it is safe to return to a Covid-secure workplace and Government departments have ensured that appropriate measures are in place to enable as many civil servants as possible to return to offices safely.’