In a plan to be launched on Tuesday, the party will call for incentives for innovative and creative businesses, more liveability for residents, the creation of more social and affordable housing and five years of funding for arts festivals and organisations. 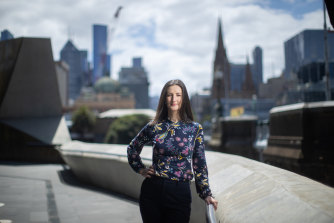 Greens deputy leader Ellen Sandell says Melbourne has a chance to reshape its city centre for the post-COVID world.Credit:Simon Schluter

Greens leader Adam Bandt said the pandemic and lockdowns had changed the way people worked, and the implications for Melbourne would be long-lasting.

“We have to rebuild a community, not just an economy,” he said. “I think Labor and Liberal haven’t really twigged that the changing nature of work and more people working from home more often will become the norm.”

The state government announced a $44 million package this week to support the recovery of CBD businesses, including a $5 million Melbourne Money scheme that would allow diners to be reimbursed a discount on their midweek spending at a restaurants or cafe. The package also included $15.7 million to boost central Melbourne events, with the Christmas festival to be expanded and start two weeks earlier than usual.

The government said it was working with the City of Melbourne to plan for the city’s future, with a focus on the role of the distinct precincts and neighbourhoods.

It said recent planning changes meant hospitality venues across Victoria could create more outdoor dining areas without needing a permit, and $58 million was being offered in grants of up to $5000 to help hospitality businesses pay for umbrellas and street furniture.

However, the Greens say vouchers are short-term fixes and do not go far enough. 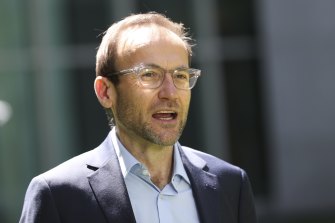 Greens leader and federal member for Melbourne Adam Bandt says working from home has been normalised by the pandemic, and many workers will continue to do so in the future.Credit:Alex Ellinghausen

The party wants to see rent reductions of up to 50 per cent for creative, tech and innovative businesses that sign long-term leases in Melbourne’s CBD and Docklands in a policy estimated to cost $490 million over five years.

The Greens also want to make the city more liveable for residents with regulation of short-term holiday rentals, limits to construction noise and traffic, and improved building design. It also proposes converting some roads, including Spencer Street, into pedestrian thoroughfares.

The Greens want up to 30 per cent of accommodation in new developments set aside for social and affordable housing, which would see apartments in the CBD available to buy from $300,000.

The party is concerned essential workers, such as teachers, cleaners and nurses, have been priced out of the city. The Melbourne goal would be part of the Greens’ previously announced $7.5 billion plan for 1 million affordable homes to be built over the next four years across Australia.

“[The city] used to be a place where the majority of people came to work in an office. That’s not going to be the case anymore,” she said.

“The city is going to be a place where people come for unique experiences. There might be restaurants or arts events or businesses that people just can’t get in their own suburb; that’s the reason why people will go there.”

The Greens plan to progress the CBD revitalisation plan through local, state and federal governments. Some of the plan’s costing is still to be determined by the Parliamentary Budget Office.

“The state government and the federal government just don’t seem to have a plan beyond crossing their fingers and hoping things will go back to normal,” Ms Sandell said.