“No Mandate Monday” may be coming to a school near you.

Some students and teachers at a California high school on Monday took part in a loosely organized protest called “No Mandate Monday” that is aimed to rebuke Sacramento over its COVID-19 classroom dictates and stand up for a senior removed from campus last week for refusing to wear a mask.

Video emerged from inside Ponderosa High School that showed maskless students taking part in the protest who had been placed into a “non-compliance room,” according to one parent.

Michael Wilkes, 38, a teacher at the El Dorado County high school, told Fox News he was put on administrative paid leave after spending the day teaching lessons without a mask. He said the district is conducting an investigation and he will likely lose his job after five years.

“I have tremendous peace of mind knowing that I’m living true to my heart,” he said.

Wilkes, a father of three young children, said he has received an outpour of support from families from within the district who agree that these mandates handed down from Sacramento do more harm than good when it comes to the health and learning environment for children. 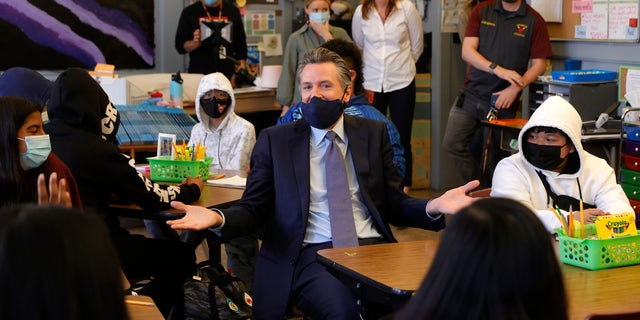 California has a statewide mask requirement that affects about 6.7 million students. The state’s largest teachers’ unions support the mandate, as does the California Association of School Boards.

Gov. Gavin Newsom, the state’s Democrat, said students will have to be vaccinated to attend in-person classes once the U.S. has fully vetted the vaccines for the particular age groups. His office did not immediately respond to an email from Fox News.

Wilkes said it was his intention to stand up for individual freedoms and encourage debate during his classes. He said parents are growing tired of these mandates and pointed to last week’s protest in Sacramento as evidence. The protest included parents who lashed out against the Newsom vaccine mandate.

The video of the protesting students emerged Monday on Let Them Breathe’s Twitter handle.

“HAPPENING RIGHT NOW,” the post read. “46 STUDENTS CHOSE TO UNMASK with the support of some teachers but are being kept in two separate rooms by admin at Ponderosa High School with instruction in El Dorado County CA. They sent us this video and asked us to share this developing situation.”

Reopen California Schools, a volunteer group, posted that the “No-Mask Mondays” was formed in protest after a student “who couldn’t wear one was disciplined because of our state’s indefinite school mask mandate.”

Wilkes said the senior at the high school, who he described as a “straight-A angel,” decided to take off the facial covering and attempt to enter classrooms last week. She was eventually removed from the campus, he said.

It was not immediately clear precisely how many students and teachers at the school took part in the protest. Ponderosa High School’s principal and the school district did not immediately respond to an after-hours email from Fox News. 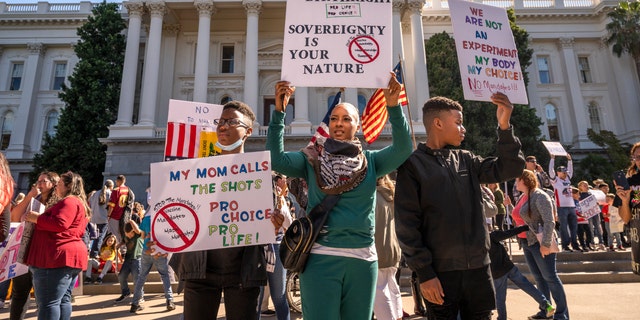 Jonathan Zachreson, the founder of Reopen California Schools, said he started his push to get students back inside the classroom when schools in the state first closed to in-person classes back in 2020. He said although the state has reopened schools, these mandates continue to take a toll on the children.

“So much has been taken from kids this past 18 months,” he said. “We need to give them back some normalcy.”

At the heart of the protest are the mask and vaccine mandates.

The argument from parents opposed to vaccines for children is that the long-term side effects of these jabs are still unknown. They also say these mandates infringe upon their freedoms.

Opponents of these calls to protest see those who refuse to wear masks as reckless and willing to jeopardize the public’s health to make a political statement.

The Food and Drug Administration posted its analysis of Pfizer’s data ahead of a public meeting this week to debate whether the shots are ready for the nation’s roughly 28 million children ages five to 11. The agency will ask a panel of outside vaccine experts to vote on that question.

FDA scientists concluded that in almost every scenario the vaccine’s benefit for preventing hospitalizations and death from COVID-19 would outweigh any serious potential side effects in children. But agency reviewers stopped short of calling for Pfizer’s shot to be authorized. Health officials have also insisted that masks–worn properly– has been proven effective in limiting the disease’s spread in indoor settings.

Wilkes said he also has support from other teachers who would otherwise speak out but are concerned about losing their jobs. But he said he will continue to hold his ground.

“This has become bigger than masks, bigger than the vaccine,” he said. “It’s about individual liberty and the parents being able to make decisions for their children.”