Mobile surveillance units are being used in parks and public spaces across Melbourne to remotely monitor citizens during stage four restrictions, fuelling concerns that police and local councils have overstepped their authority. 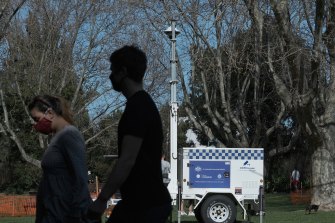 A Victoria Police surveillance camera at the Victoria Gardens park in Prahran on Sunday. Credit:Luis Ascui

One of the units has been based at Victoria Gardens in Prahran for the past few days, but has also been seen at other locations around the municipality of Stonnington in Melbourne's inner-south.

Part of a joint initiative between several Melbourne councils, Victoria Police and the Commonwealth government, the units are mounted with closed circuit cameras.

Prahran resident Denzil Griffiths said he was disgusted that visitors to the park on High Street were being remotely monitored, which he said was "reminiscent of what's going on in Hong Kong".

"This is just the latest intrusion in our lives and there's absolutely no justification for this type of surveillance. This is a public park, where parents go with there kids, people walk dogs and old people go for exercise as they're all entitled to do", Mr Griffiths said.

The Age has confirmed there have been no breaches of stage four restrictions at Victoria Gardens and no reports to police.

Over the weekend, Mr Griffiths made a complaint to federal MP Dr Katie Allen, who holds the seat of Higgins.

A Victoria Police spokesman confirmed the mobile surveillance units were deployed in other municipalities across Melbourne.

"The cameras can help to capture and deter breaches of Chief Health Officer directions as well as other crimes and community safety issues. For operational reasons we will not be providing commentary on how many of these units are being used or where and when they are positioned," the police spokesman said.

David Grayson from St Kilda East visited Victoria Gardens on Sunday morning and accused police of abusing new powers conferred on the force by the Chief Health Officer and the government.

"If you have a look around, everyone is doing the right thing and there's absolutely no need for us to be spied on. They have no regard for our civil liberties," Mr Grayson said.

He also doubted their effectiveness.

"Are you telling me that someone is watching a screen somewhere and then sends the cops over when they see someone having a picnic or holding hands?"

However, Liberty Victoria president Julian Burnside, QC, sided with the police and said the public health crisis justified the curtailment of some basic rights.

A spokesman for Stonnington council confirmed the use of the mobile units, which were regularly moved between sites.

"The City of Stonnington and Victoria Police are working in partnership on a number of initiatives to monitor compliance with COVID-19 restrictions as we enter the warmer months, in particular monitoring key public areas where gatherings and social distancing may be an ongoing issue," the spokesman said.

Get our Coronavirus Update newsletter for the day’s crucial developments at a glance, the numbers you need to know and what our readers are saying. Sign up to The Sydney Morning Herald’s newsletter here and The Age’s here.