New driver, 17, avoids jail after killing 18-year-old in road smash as judge says she is ‘genuinely suffering’ from the tragedy

A new driver has avoided jail after killing an 18-year-old in a road smash after a judge said she is ‘genuinely suffering’ from the consequences of the tragedy.

Rebecca Flannery from Merseyside had recently passed her driving test at the age of 17 when she inadvertently pulled out from a side road into the path of another vehicle being driven along a main road.

Aiden Blackman, 18, who had also only just passed his test tried to take evasive action on the road in Leigh, Greater Manchester, but his white Kia Sport clipped Flannery’s Peugeot 107, causing his vehicle to flip over.

He was thrown from the car by the force of the impact and died at the scene after suffering fatal head injuries. 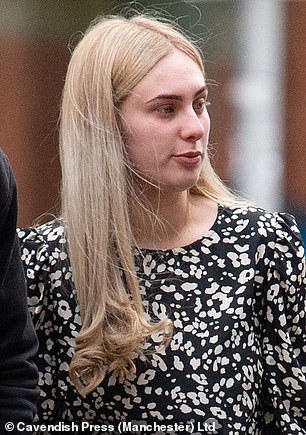 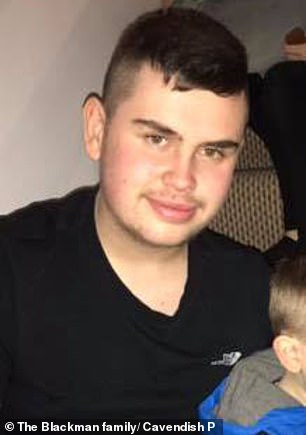 Rebecca Flannery (pictured left, outside Manchester Magistrates Court), now 19, inadvertently pulled out from a side road into the path of 18-year-old Aiden Blackman’s (right) vehicle

An investigation revealed Flannery, who lives in the village of Clock Face near St Helens, had been waiting at a road junction but was blindsided by a lorry turning towards her and she pulled out – not realising Aiden’s car was travelling behind the truck. She broke down in tears when police showed her CCTV of the accident.

She admitted to causing death by careless driving at Manchester Magistrates Court and was ordered to complete 200 hours of unpaid work.

The maximum sentence for the offence in a crown court is five years imprisonment.

In a statement, Aiden’s father Carl Blackman said: ‘When Aiden lost his life we as a family lost a huge part of our lives too. He was kind, polite and extremely thoughtful. We were very proud of everything he achieved.

‘He had a heart of gold and would do anything for anyone and didn’t need to be reminded about birthdays and he would often surprise his mum with gifts.

‘He was such a big personality would be dancing around and being daft and you always knew when he was in a room. His younger sisters often make things at home for Aiden and place the items on his grave.

‘They don’t fully understand what’s happened to Aiden with them being so young. His death has completely shattered us as a family and every day is an ongoing challenge.

‘He had everything to live for and was just starting out in his adult life. We won’t see him getting married all this has been taken from us. Yet the driver gets to go home and get on with her life.’

‘Aiden was a bright generous and intelligent young man with his life ahead of him. He had ambitions and hopes and wanted to share those with his family but none of that came to fruition. 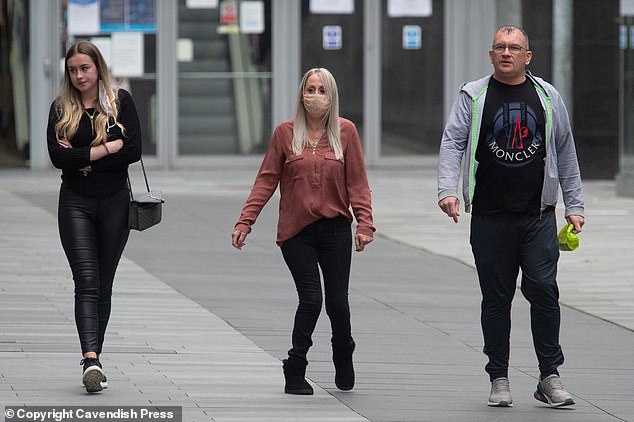 The family of Aiden Blackman pictured above leaving Manchester Magistrates Court, where Flannery, from Merseyside, admitted to causing death by dangerous driving 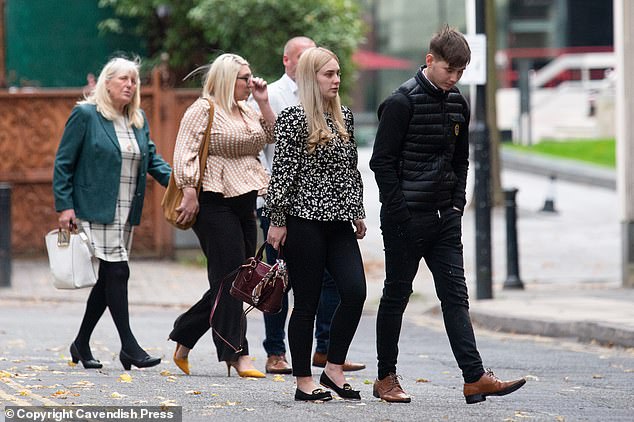 Flannery, pictured with her family outside court, has avoided jail after a judge said she was ‘genuinely suffering’ from the consequences of the tragedy

‘His family has been shattered by what’s happened and nobody can cure the enormous hurt. All I can hope is the family get some closure after today knowing the case has been dealt with. You can’t put a price on a life or a punishment on a loss of life it’s not humanly possible.’

Aiden’s family wept in the public gallery as the judge told Flannery: ‘I believe you are genuinely suffering from the consequences of your failure and don’t think it’s put on and don’t believe it’s out of fear of what might happen to you.

‘I think you do realise the consequences of your actions or inactions and I do view this as a momentary lapse of attention. Had it been the case of somebody taking a chance or misjudging distances then I might view it more seriously.

‘It’s a dangerous junction on a very important main road and I just don’t think you saw the car at all. We all have to remember that we all have lapses of attention and most of us are lucky enough to pass by without anything happening.

The tragedy took place in May last year when Aiden, who had four sisters and a brother, had just driven away from a garage after buying cigarettes. 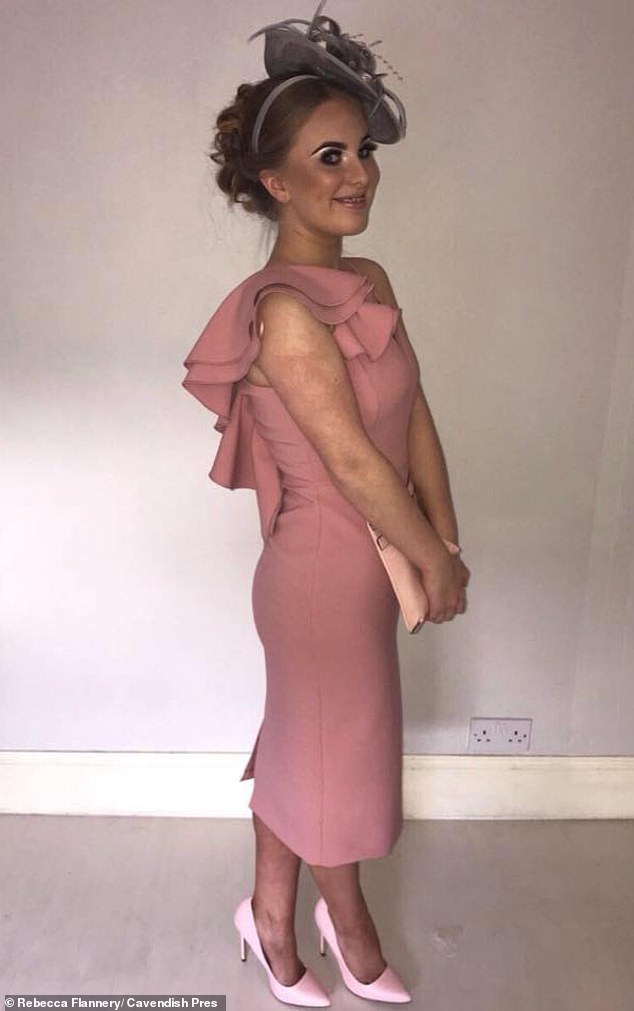 Flannery, pictured above, who works as a housekeeper at a care home, was also banned from driving for 12 months and ordered to pay £175 in costs and surcharges

He was driving behind an HGV which then turned left on the side street at a set of traffic lights where Flannery was waiting to pull out.

Prosecutor Nick Smart said: ‘Mr Blackman continued straight ahead through the junction but turning right across his path was the defendant in her black Peugeot 107.

‘The Peugeot collided with his Kia sport and caused it to swerve to the near side of the road. The Kia collided with the kerb and rolled over onto its roof. Upon the vehicle rolling Mr Blackman came out of the vehicle and he suffered regrettable catastrophic head injuries.

‘This lady was interviewed by the police and initially stated she reached the junction as the lights were changing and stopped after the lights and waited to turn right.

‘She said at this time a HGV was turning left and she waited with the clutch at the biting point to turn right after the HGV had finished turning. She didn’t see the Kia and only glanced onto Warrington road after the lorry turned.

‘After being shown the CCTV she became upset and said indeed the collision was her fault.’

The court heard Flannery had been taking advance driving lessons since the accident.

Her lawyer, Patrick Heald, said: ‘There is nothing that I can say that would dilute in any way the appalling consequences of what can only be described as either momentary inattention, simply a degree of carelessness and perhaps inexperience.

‘The consequences that followed through that lapse are unimaginable. It’s particularly poignant that respective parties involved in this tragedy at the time were both teenagers.

‘Clearly, the offence has had a significant effect upon the defendant as well as everybody else. The momentary lapse was certainly not intentional. She has a significant grasp of the impact that this has had and expressed that very very clearly and understood it immediately. She offers her heartfelt apologies to the family concerned.’

Flannery was also ordered to be electronically tagged for 12 weeks and must stay indoors from 8pm and 8am. She was further ordered to pay £175 in costs and surcharges and was banned from driving for 12 months.

The judge commended Aiden’s family for showing ‘enormous dignity’ during the court proceedings.