A father held six of his nine children captive for nearly 10 years, telling them “bad spirits” would enter their bodies if they left the house, a court has heard.

Gerrit-Jan Van Dorsten, 67, is charged with unlawful detention, child abuse, money laundering and sexual abuse after he and five adult children were found at an isolated farmhouse in Ruinerwold, in the northern Netherlands.

A sixth sibling had escaped and reached a nearby village bar, where locals alerted police. Van Dorsten suffered a stroke and now cannot speak, and wasn’t at the pre-trial hearing in Assen.

Diana Roggen, prosecuting, told judges: “All the children report physical punishment if they were deemed to be under the influence of spirits.

“This happened from a very young age, with children as young as four or five years old.

“The punishments would consist of beatings, sometimes with a stick or other objects, pulling of their hair, sometimes making them sit in a cold bath for hours. Sometimes they were choked to the point where they became unconscious.”

She also said the children were discouraged from interacting with “outsiders” because it was deemed bad for “cleanliness of the prime family”.

The six youngest were kept in seclusion from birth and had to stay inside and keep quiet, Ms Roggen told the court.

The older children were kept away from their siblings. One 15-year-old girl was moved to another town while a 12-year-old son was forced to live alone in a caravan.

Van Dorsten is accused of telling the children the death of their mother in 2004 was their fault for having contact with the outside world. One child told the prosecutors during questioning: “I had a bad spirit and I did not want to transfer it to them.”

The children have been watching proceedings remotely but may have to testify later.

Allegations made by the children have been confirmed by diaries kept by Van Dorsten found in the farmhouse.

Ms Roggen said: “The children’s statements are confirmed by the diaries seized during the search. Van Dorsten wrote several times about bad spirits who are in the body of one of his children and about how they were expelled.

“What is written in those diaries accurately correspond to events described by the children.”

He kept track of their movements with cameras, and told the children “bad spirits would enter their bodies” if they came into contact with outsiders.

He also told them the world would “end violently”.

The children were held between 2007 and their discovery last year. Van Dorsten withheld food, drink and medical treatment, and some of the older children have said they were forced to perform sex acts on him.

He justified these by telling them “a female spirit, the spirit of their mother or another spiritual wife” entered their bodies. 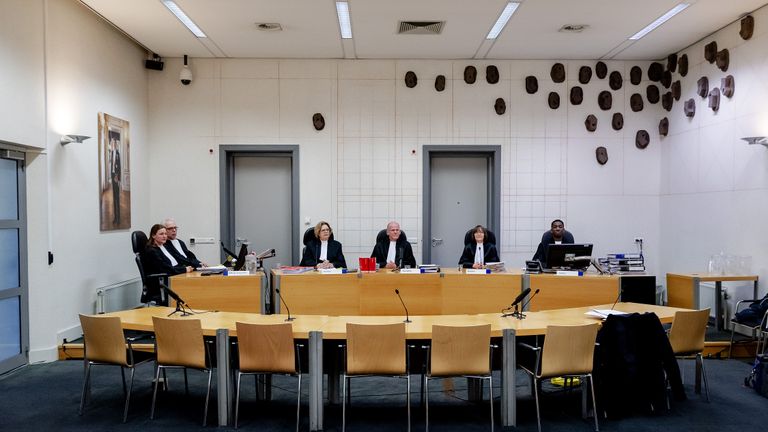 Three older children had left the family before Van Dorsten took them into seclusion.

Josef Brunner, an Austrian, has been named as an accomplice of Van Dorsten, as he paid rent on the farmhouse. He has been charged with endangering the health of others and unlawful detention.

All the children are now over the age of 18. They have not spoken publicly but have given statements to a Dutch filmmaker.

The four eldest – three who left the family and the one who escaped – have said they support their father’s prosecution, but the five younger siblings said they did not.

They are in counselling.