Multiple people are still trapped after a serious collision on the Calder Freeway in Melbourne’s north-west, with two people including a child already taken to hospital.

Police believe a truck collided with multiple vehicles near the Diggers Rest-Bulla Road overpass, about 35 kilometres from Melbourne’s CBD, just after 2.30pm on Monday. 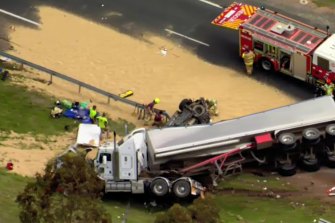 A collision between a semi-trailer and a number of vehicles at Diggers Rest on Monday. Credit:Nine News

A police spokeswoman said “the incident is dynamic at this stage, but there are multiple people trapped in vehicles”.

Paramedics are treating five people for injuries following the crash, including a child who has been taken to the Royal Children’s Hospital and another person transported to the Royal Melbourne Hospital.

An Ambulance Victoria spokeswoman said there were no details of injuries or the conditions of those in the vehicles at this stage.

Many emergency services personnel remain at the scene and an air ambulance helicopter was also dispatched. 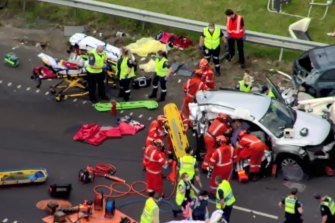 Emergency services on scene at the crash on the Calder Freeway. Credit:Nine News

Vision of the crash from Nine News shows a large semi-trailer tipped on its side, with at least three damaged cars nearby.

Both Melbourne-bound lanes of the Calder Freeway near Bulla-Diggers Rest Road have been closed due to the serious collision, the Department of Transport said.

Our Breaking News Alert will notify you of significant breaking news when it happens. Get it here.