‘I can touch my neighbour’s house from my open window’: Furious mother blasts developers for building new home just 4.1ft away from her’s – but council refuses to intervene

A mother-of-seven has revealed her outrage after developers built a new home just 4.1ft away from her ‘sanctuary’ and claimed the new build was within touching distance.

Niki Caira said the new £350,000 house in Fife, Scotland, could force her family to move out as it spoiled their ‘happy place’ and curbed their privacy.

The Scottish mother said the property is ‘closer than it should have been’ and stress over the issue caused her to lose two stones in weight.

Fife Council admitted the two homes were 4cm too close but said it would not be taking action as they were within the degree of tolerance. 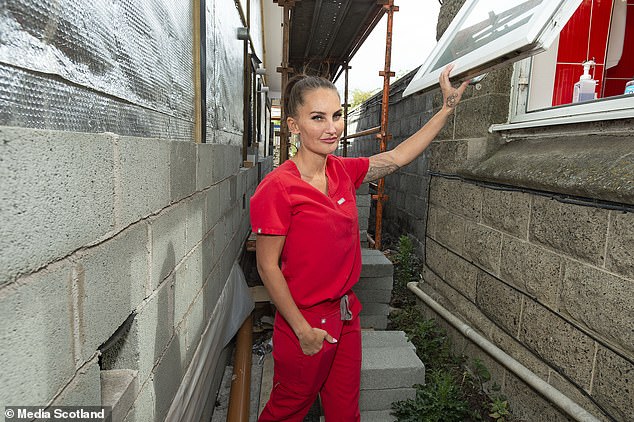 Niki Caira (pictured above) was fuming after a new property was built inches away from her home. The mother-of-seven said the issue had led her to losing two stones in weight

The council said legal action between the two parties was up to the tenants.

Ms Caira told the Record: ‘We have absolutely zero privacy now. I can’t even sit on my toilet without worrying that I’m going to be exposing myself or that someone is going to be looking in at me or my children.

‘I just have to open the window and I can actually touch my next door neighbour’s house. It’s ridiculous.’

Fife Council in an email to Ms Caira said: ‘I can advise that planning enforcement officers have visited the site and measured the location of the properties currently under construction, having done so we have determined that the closest property is 4cm closer to the boundary than the approved plans – the measurement is approved as being 1.3 metres and as built it measures 1.26 metres. 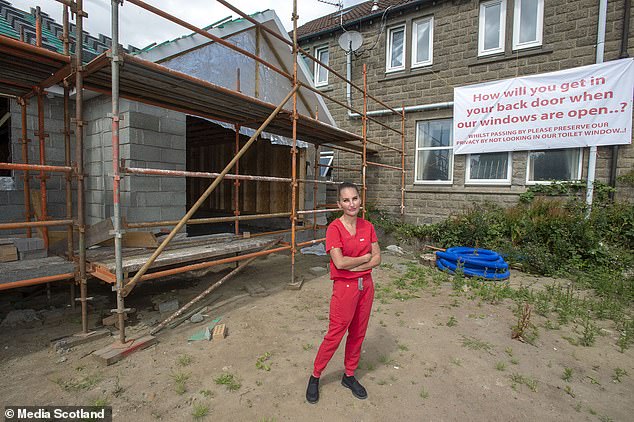 Ms Caira (pictured) with a white sign behind her which reads ‘how will you get in your back door when our windows are open…?’ The row comes after Fife Council admitted the two homes were 4cm too close

‘This is well within the degree of tolerance for the construction of new buildings and we do not intend to take any further enforcement action in relation to that issue.’

Fife Council’s head of planning Pam Ewen told the Daily Record: ‘The council is content that the measurements taken meet the relevant planning and building regulations.

Planning and building regulations have been followed throughout this build.

‘Any boundary disputes are private legal issues for the parties involved to resolve. Land ownership is not related to the granting of planning permission. 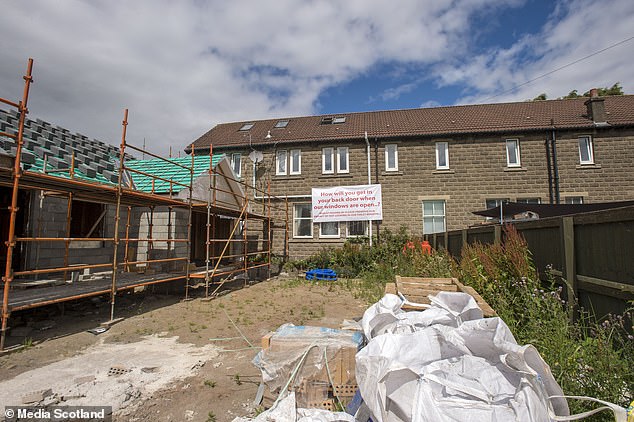 Fife Council admitted the distance between the two properties was 4cm closer than it should have been. However it said it would not intervene

‘No enforcement action has been taken to date. However new areas of concern have been raised with us this week and we are looking into these.’

Aesthetics Practitioner Nikki, has lived at her home with her children, husband Mario and mum Mhairi for the last 16 years.

Niki added: ‘We absolutely loved our home, but now I just feel stressed every time I look out of my windows. It’s such a shame because we were all so happy living here until now.’

Alex Penman, the former chairman of football club Raith Rovers, whose company is building the properties, is suing Ms Caira for defamation of character.

Mr Penman said comments made by her on social media resulted in losing £75,000 of earnings while causing him distress and embarrassment.