More than 100 migrants are feared dead after attempting to reach Europe in a boat that capsized in rough waters off the Libyan coast.

According to humanitarian rescue group SOS Mediterranee, the boat had been reported in distress with about 130 people on board in international waters north-east of Tripoli on Wednesday (AEST). 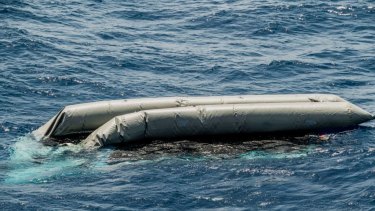 Rescue boats found the wreck but no survivors. Credit:SOS Mediterranee

Another two vessels in distress also called for help in the notorious stretch of Mediterranean Sea in the previous 48 hours through the volunteer-run rescue hotline Alarm Phone amid reports of six-metre waves.

SOS Mediterranee’s rescue ship, the Ocean Viking, and three merchant vessels went out to the site of the capsizing where they found about 10 bodies but no survivors.

“Today, after hours of search, our worst fear has come true. The crew of the Ocean Viking had to witness the devastating aftermath of the shipwreck of a rubber boat north-east of Tripoli,” Ocean Viking search and rescue coordinator Luisa Albera said in a statement.

“We are heartbroken. We think of the lives that have been lost and of the families who might never have certainty as to what happened to their loved ones.”

The tragedy comes a day after the International Organisation for Migration reported a woman and child had died on an overcrowded rubber boat that was intercepted by the Libyan coast guard in international waters and returned to shore. Remaining migrants were taken into detention.

“We can see the result of this deliberate inaction in the sea around our ship,” Albera said, referring to the bodies of the migrants found by Ocean Viking personnel.

According to SOS Mediterranee, more than 350 people have died in the short stretch of sea separating Europe and Africa this year. The figure does not include the victims of the latest capsize.