All aboard the money train: Ministers reveal more than £4billion has been paid to rail companies during the pandemic to keep running half-empty trains amid a collapse in commuting

Ministers have dished out £4.2billion to rail franchises to prop up the UK’s rail networks during the pandemic, new figures have revealed.

The cash was handed out to 14 firms between March and late September amid a collapse in commuting, Transport Minister Chris Heaton-Harris told MPs.

Payments hit more than £600million per month in September despite brief attempts by the Government to get people back in to their workplaces before the second wave of coronavirus hit.

The situation is laid out in stark detail in figures revealed by the Department for Transport in its answer to a Written Ministerial Question by Labour’s Karen Buck.

Mr Heaton-Harris replied: ‘Approximately £4.2bn has been paid in operational support to all 14 Train Operating Companies, including the two in public ownership, up to the end of rail period 6 (from 1 March to 20 September).’

Department for Transport data shows demand for rail travel across Britain is at around a quarter of normal levels.

Rail companies were handed emergency recovery management agreements (ERMAs) in September, which mean taxpayers are covering their multibillion-pound losses and paying them a fee of up to 1.5 per cent of their pre-pandemic operating costs. 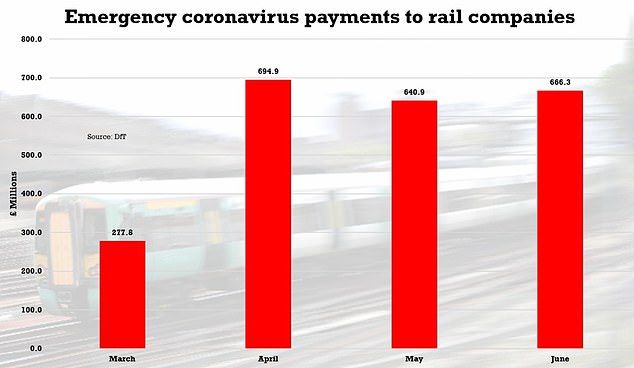 It came as the head of one of the rail companies predicted demand for rail travel will only return to 75 per cent of normal levels following the coronavirus pandemic.

Dominic Booth, managing director of Abellio Group, told MPs yesterday he is ‘very confident about winning the majority of passengers back’.

Giving evidence to the Commons Transport Select Committee, he said: ‘We expect to be able to win back around 75 per cent on a like-for-like basis of passenger journeys.’

Mr Booth acknowledged there will be ‘quite a lot of change’ in travel patterns, particularly due to the shift in people working from home instead of commuting.

He went on: ‘A combination of winning back a very healthy chunk of our previous patronage added to an enhanced role in the climate change agenda over the next several years we think calls for quite a substantial and large-sized railway to remain.’

Compelling as it is, there’s not a lot new in After The Night, a four-part documentary series about Australia's most

Ellen Page comes out as transgender, will be called Elliot