Nashville business owner: ‘The hardest part’ is not knowing when we can rebuild after bombing

The Melting Pot co-owner Carla Rosenthal tells ‘Your World’ an entire block of businesses may no longer be structurally sound due to the blast.

As investigators work to determine a motive behind the Christmas Day bombing in Nashville, attention has turned to a Los Angeles entertainment executive who was gifted two Tennessee homes by the suspect.

Michelle Swing, 29, was given the two properties – worth more than $400,000 combined – in the past two years, despite paying nothing for them, property records show.

It remains unclear what Swing’s relationship was with 63-year-old Warner. Swing has refused to say how she knows Warner and has claimed to be unaware of a second quitclaim transfer.

Reached by the Daily Mail on Sunday, Swing claimed she had no idea about the second home and said she had been "told to direct everything else to the FBI." 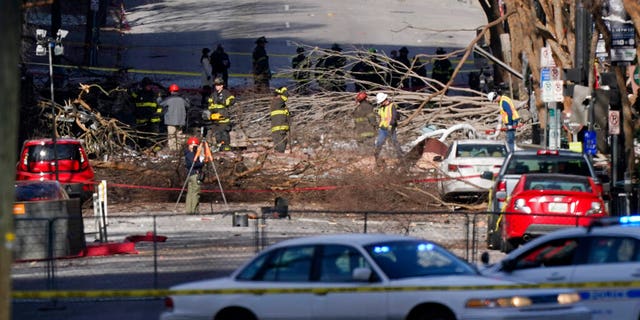 Investigators continue to examine the site of an explosion Sunday, Dec. 27, 2020, in downtown Nashville, Tenn.
(AP)

Court records cited by the outlet revealed that Warner had been sued by his mother, Betty Christine Lane, 85, over their family home following the September 2018 death of his brother. The 62-year-old brother was given the family home after the death of their father, Charles B. Warner, in 2011, but did not leave a will to determine who would get the home.

Records show that Lane won the suit, and Swing signed a quitclaim last year, giving the $250,000 back to Lane, who still lives there, the New York Post reported. Swing was reportedly gifted the second home – worth $160,000 – on Nov. 25, exactly one month before the Nashville bombing.

Swing told the Daily Mail that the state of Tennessee allows people to "deep property to someone else without their consent or their signature or anything."

"I didn’t even buy the house, he just deeded it over to me without my knowledge. So this is all very weird to me, that’s about all I can say," she said.

But the U.S. edition of The Sun reported that Warner allegedly sent Swing a letter – now being reviewed by the FBI – when he transferred the deed.

In the letter, Warner reportedly warned Swing that the basement was "not normal" and that he "intended to travel on Christmas Eve to spend a few weeks in the woods with his dogs."

"The attic has plywood and lighting, take a look. The basement is not normal, take a look. Woof woof Julio," Warner wrote. The identity of "Julio" is unclear.

Swing has deleted her presence online, including her Facebook and LinkedIn. But they offered a glimpse into Swing’s history prior to her moving to California.

She previously lived in Lenoir City – about 165 miles from Nashville – and went to school at the University of Tennessee in Knoxville. She worked at various jobs in the early 2010s before moving to San Francisco where she worked as a project manager for Live Music & Festival Solutions.

Between February 2016 and September 2018, Swing worked at StubHub before landing her current position as an executive in artist development for Anschutz Entertainment Group.