Storm Dennis will bring heavy rain and high winds and threatens to disrupt travel as well lead to flooding. This is the second Atlantic storm to hit Britain in the space of the week after Storm Ciara’s arrival last weekend.

Is your area at risk of Storm Dennis?

There are four Met Office amber warnings for rain on both Saturday and Sunday.

One warning on Saturday covers parts of Lancashire and Yorkshire, between Hawes, Burnley, Bradford and Leyburn.

The other three are in place in parts of SW Scotland, Lothian Borders, South West England, Wales, Yorkshire and Humber. 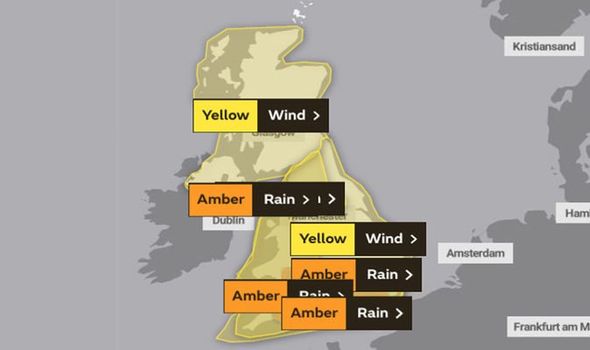 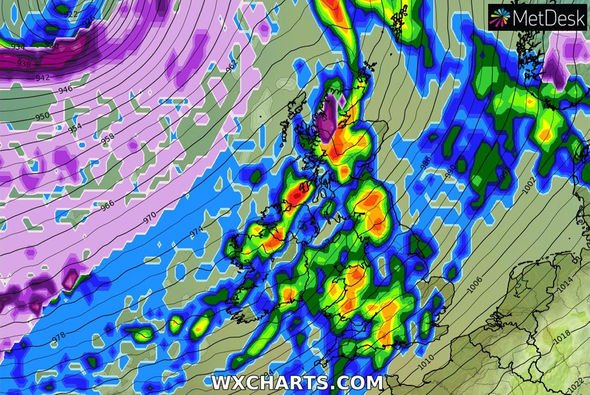 Another amber warning kicks in on Sunday from 12.15am until 6pm for Brighton and Hove, East Sussex, Hampshire, Kent, Surrey and West Sussex.

The Met Office said: “Spells of heavy and prolonged rain are expected to affect parts of England and Wales over the weekend with a higher likelihood of impacts now expected in some areas.

“Around 20 to 40 mm of rain will fall widely with 50 to 80 mm likely across parts of northern and southern England.

“Over the higher ground of Wales and southwest England, 120 to 140 mm of rain is possible in a few locations.

“This rain is expected to fall across areas already wet from recent rainfall.” 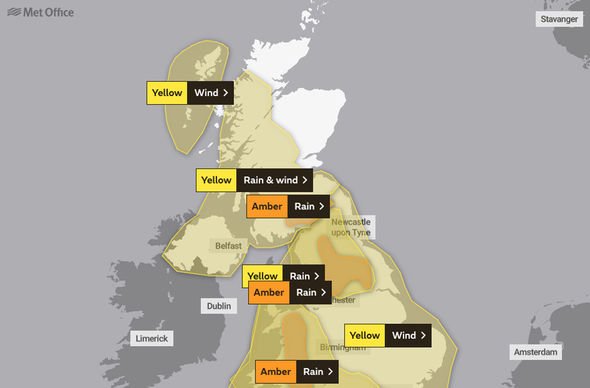 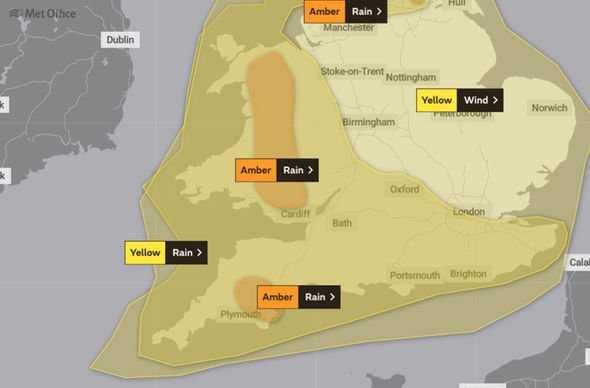 Elsewhere on Saturday, a yellow warning for wind and rain covers Central, Tayside, Fife, SW Scotland, Lothian Borders and Strathclyde from 9am to 6pm.

The Met Office said: “A band of rain and strong winds will move eastwards across southern and central Scotland on Saturday.

“South to southwesterly winds will gust to 50 to 60 mph along exposed coasts and over high ground.

“In addition, some heavy rainfall is expected at times with accumulations of up to 40 mm on high ground. Coupled with snowmelt this may lead to some local flooding.”

DON’T MISS:
Will Arsenal vs Newcastle be called off due to Storm Dennis?
Storm Dennis path update: THIS is where Storm Dennis will hit
Will the Severn crossing be closed or open when Storm Dennis hits UK?

The Met Office again warns that spells of prolonged heavy rain could bring about 20 to 40mm of precipitation, with some areas of northern and southern England seeing between 50 to 80mm of rainfall.

The Met Office said: “Over the higher ground of Wales and southwest England, 120-140 mm of rain is possible in a few locations.

“This rain is expected to fall across areas already wet from recent rainfall.” 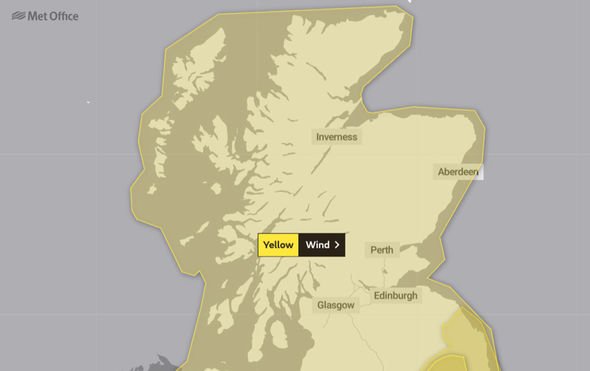 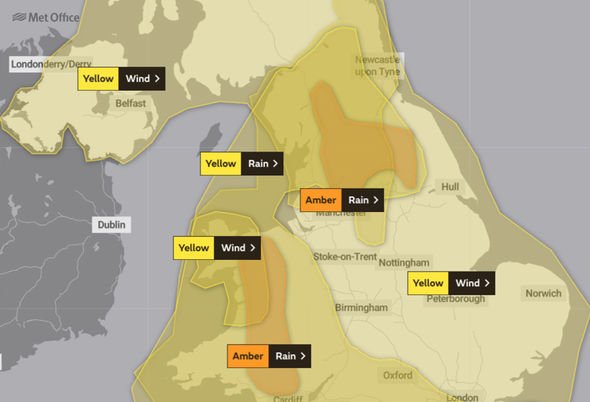 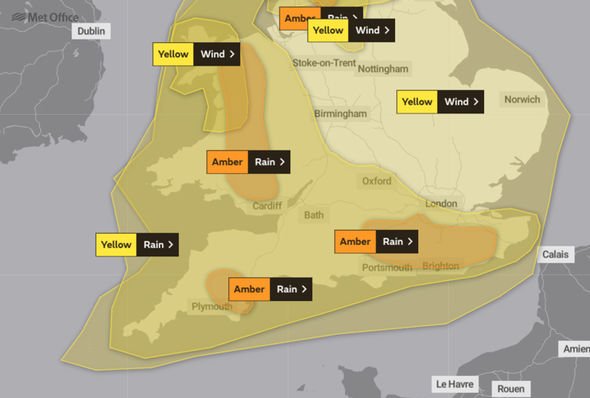 How to stay safe as Storm Dennis hits

The stormy weather could cause severe disruption to air, rail and road travel.

Driving in high wind and rainfall can be dangerous as it can change a vehicle’s dynamics.

The Met Office has tips for drivers in which they urge road users to consider delaying a journey or assessing whether it is necessary to travel if heavy rainfall is predicted.

For those that need to venture out in stormy weather, motorists are urged to grip the steering wheel firmly to help stabilise their vehicle.

Heavy winds can disrupt a car and could cause a vehicle to move around or slide into other lanes or below road users.

Gripping a steering wheel will help keep the car straight, while allowing plenty of space between the car ahead will reduce the risk of incidents through heavy winds.

Experts advise motorists should never drive through floodwater as even a small amount can lead to severe damage.

The Met Office says the number one cause of death during flooding is driving through the deep water so this should not be attempted.

The RAC says motorists should avoid driving near fast-moving or heavy vehicles as these can cause spray to drastically reduce visibility.

They warn fog lights should never be used in stormy weather as these can dazzle fellow road users.

Dipped headlights are perfect for the conditions and will enable other motorists to see you much more clearly on the road ahead. 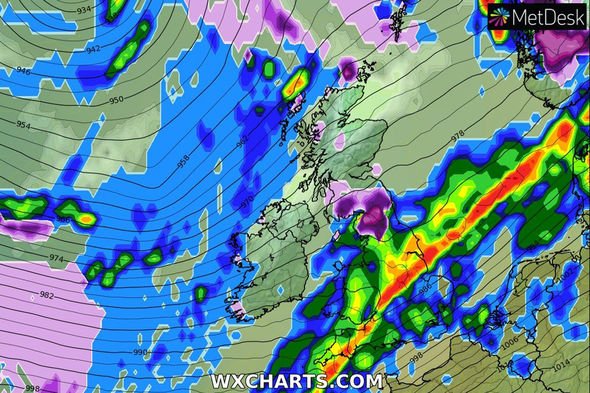 The Royal National Lifeboat Institution charity (RNLI) is encouraging people to exercise extreme caution if visiting the coast this weekend, especially along exposed cliffs, seafronts and piers during Storm Dennis.

“We are still seeing people walking in exposed areas to see crashing waves, putting themselves at risk of being swept in.

“We urge anyone going out to think twice about the dangers around our coastline.

“Sadly, around 150 people accidentally lose their lives around UK and Irish waters each year and over half of these people didn’t plan on ever entering the water.

“Slips, trips and falls can be a major factor in these kinds of incidents, especially with the risk of cold water shock for anybody finding themselves in the water unexpectedly.”

Jason Finch, RSPCA Inspector National Water Rescue Coordinator, warned people living in areas at risk of flooding should have an escape plan to get livestock and other animals out of danger.

He said: “Don’t put your own or another life in danger to attempt an animal rescue.

“The RSPCA has an experienced team of 80 inspectors – trained to work in water, to rescue both people and animals – to provide assistance to communities affected by flooding.”

Over the weekend, the release of Guns Akimbo was put into question after its director Jason Lei Howden launched a vicious Twitter