California man, 39, is sentenced to death for killing SIX members of his ex-wife’s family because he wanted revenge after she left him

A man who prosecutors say was driven by vengeance when he fatally shot six members of his ex-wife’s family in Texas, including four children, was sentenced Friday to death, a decision the lone survivor of the attack says will help her let go of ‘hurt and anger.’

Jurors sentenced Ronald Lee Haskell after deliberating for little more than four hours. The jury had to choose between life in prison without parole or a death sentence.

The same jury last month convicted Haskell of capital murder in the 2014 killings of Stephen and Katie Stay at their home in suburban Houston. The jury rejected his attorneys’ efforts to have him found not guilty by reason of insanity.

In 2014, Haskell drove from California to Texas and posed as a FedEx deliveryman to force his way into the Stay family’s home searching for his ex-wife. There he fatally shot his ex-wife’s sister and husband-in-law, along with four of heir children.

A fifth child, 15-year-old Cassidy Stay, was shot in the head but she survived by playing dead. 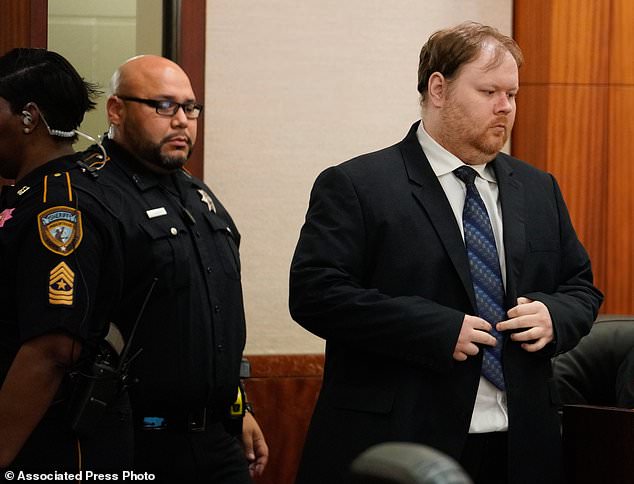 Ronald Lee Haskell was sentenced to death on Friday after carrying out the ‘cold-blooded execution’ of six of his ex-wife’s family members, because they helped her after their divorce 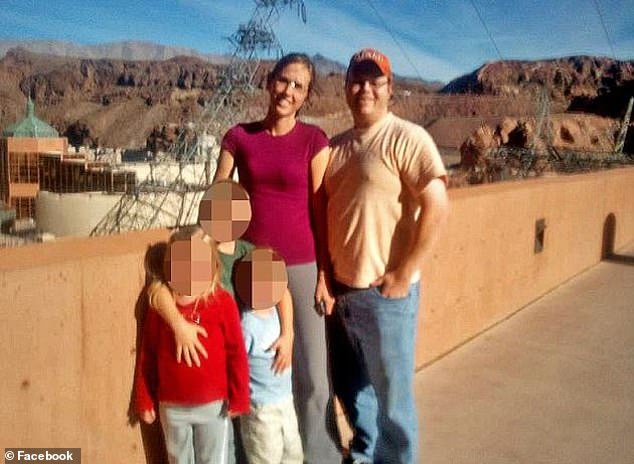 Haskell (right) spiraled into depression after his wife, Melannie Lyon (left) divorced him months before the killing, after an 11-year abusive relationship. She was also granted custody of the couple’s three children 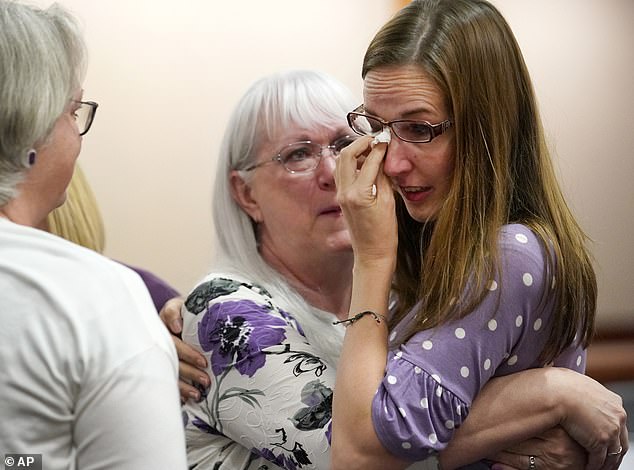 Melannie Lyon (right) wipes away tears at the sentencing. Haskell has murdered her sister, as as her husband and children

After the sentence was announced, Cassidy Stay, now 20, read a victim impact statement from the witness stand, saying she had initially had felt ‘hurt and anger’ after learning that Haskell felt no remorse for killing her family.

‘My closure was the hope that you would feel bad … I’m letting go of my emotions and I’m giving it to God because he’ll take care of me and he’ll help me through this,’ said Stay, adding she would continue to live ‘my life with happiness’ and forget about Haskell.

Williford described how Haskell shot 4-year-old Zach in the shoulder – an injury he could have survived – and said the frightened child scurried in the chaos to his father on a couch, burying his head in his father’s shoulder for protection.

But by that point, Zach’s father was already dead, Williford said.

‘He scrambles over to his father, because that’s what little boys do,’ Williford said.

Haskell then went over to Zach, pointed a gun to the back of his head and pulled the trigger, she said.

‘How cold and vengeful do you have to be to take the life of a 4-year-old?’ Williford said. 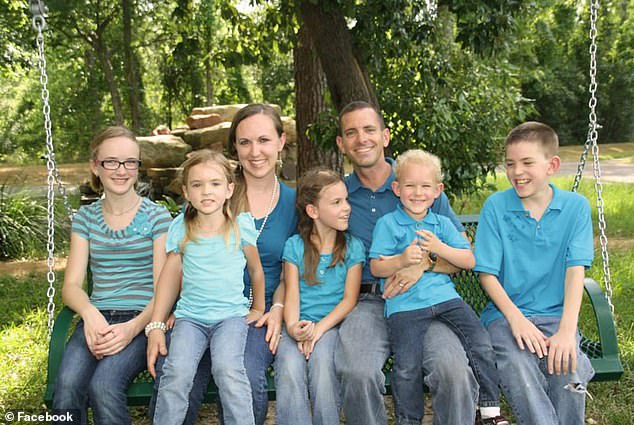 In an act of vengeance he stalked his ex-wife’s family and forced his way into the Stay family’s home. He killed 39-year-old Stephen Stay and his 34-year-old wife Katie, along with their four children, (pictured second left to right) 7-year-old Rebecca; 9-year-old Emily; 4-year-old Zach; and 13-year-old Bryan. Cassidy Stay (far left) survived the shooting 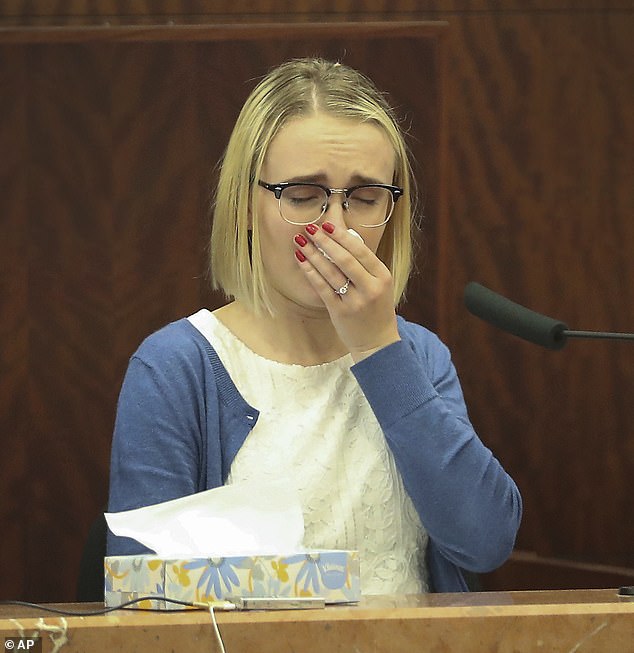 Cassidy Stay, 20, was the only person in her family to survive the massacre and testified against Haskell. She was shot in the head, but played dead in order to survive 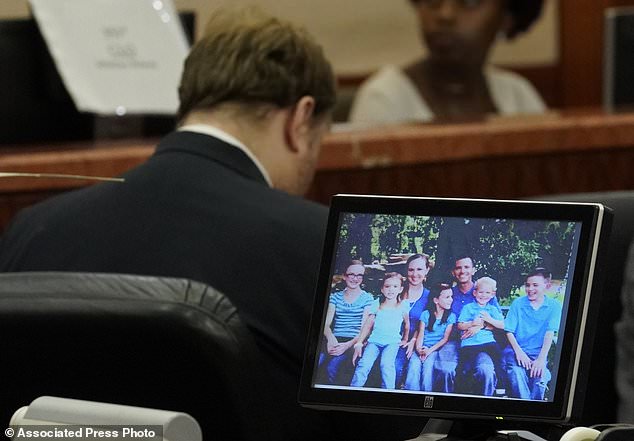 Haskell sits with his head down as a photo of the Stay family is shown during his sentencing. It took the jury little more than four hours of deliberating before deciding on the death penalty

Cassidy Stay, now 20, was in court on Friday and cried when Williford detailed the killing of her family. At least one juror also wiped away tears. Stay testified at trial, which began Aug. 26, that she begged her uncle ‘please don’t hurt us’ before Haskell opened fire.

Neal Davis III said the 39-year-old man should spend the rest of his life thinking about what he has done and ‘die in prison.’

Doug Durham told jurors that at the heart of prosecutors’ arguments for a death sentence is ‘anger, hatred, fear, vengeance because of this terrible, terrible crime.’

Durham said Haskell’s long history of mental illness, in which he was treated by multiple doctors, should be considered by the jury as a mitigating factor in deciding that life in prison would be a more appropriate sentence. His attorneys said Haskell heard voices that told him to kill his ex-wife’s family.

Durham urged jurors to consider ‘compassion and forgiveness’ instead of ‘hate, anger’ when making their decision.

But prosecutor Lauren Bard told jurors that Haskell’s ‘issue is not his mental illness, his issue is his personality,’ describing him as a ‘manipulative, selfish, narcissistic, blame-shifting monster.’

Prosecutors said Haskell had faked symptoms of mental illness and had meticulously crafted a plan to hurt anybody who helped his ex-wife, Melannie Lyon, after the couple divorced, traveling from California to Texas to carry out the killings.

To impose a death sentence, jurors had to find Haskell would be a future danger to society and that any mitigating factors – such as mental illness – were insufficient to merit a lesser sentence.

Prosecutors only needed to charge Haskell with two of the deaths to get to capital murder. In cases with multiple murders, it is a common trial strategy for prosecutors to not charge the deaths all at once in case legal issues arise and new indictments are needed. 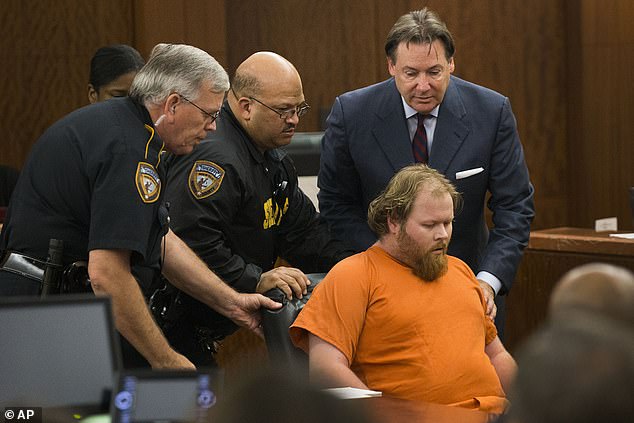 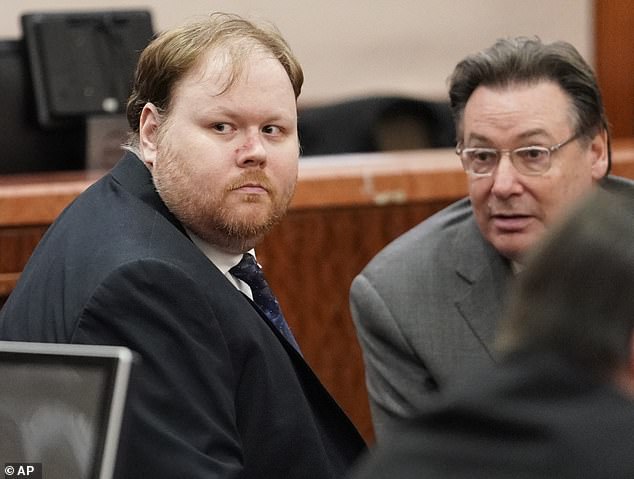 Haskell (pictured with Douglas Durham, his attorney) reloaded his gun after the shooting and headed to the homes of his ex-wife’s other family, but was stopped by police

After the shooting, he reloaded his gun and headed to the homes of Lyon’s parents and brother so, according to prosecutors, he could complete his vengeful plan. He was arrested before reaching any other homes.

During the trial’s punishment phase, relatives of the Stays told jurors how their lives were devastated by the killings.

Haskell’s brother testified that his sibling ‘still has good in him.’

After Friday’s verdict, Cassidy Stay told reporters she hopes what she experienced will give others strength to face difficulties in their own lives.