After swathes of snow and ice warnings were issued for the UK this week, today (Friday, January 15) only a Met Office yellow ice warning covered Scotland and much of England until 10am. But according to the Met Office, the UK could next see some significant snowfall again as early as this weekend. Becky Mitchell, meteorologist at the Met Office, said: “Saturday is the next day we could potentially see some snow.”

Snow and ice warnings have been issued for much of Scotland, northern England and parts of the Midlands between midnight and 6pm on Saturday.

The Met Office warns an “area of rain pushing eastwards is expected to turn to snow in places” across parts of Scotland, northern and eastern England.

The Met Office warning adds: “Snow is likely to fall to low levels over east Scotland and northern England for a time on the leading edge of the rain before the snow level rises to above 300-400 m by mid morning.”

At lower levels, the Met Office predict 1 to 3cm, or around an inch, of snow could accumulate.

Areas above 200m in Scotland and northern England could see 5 to 10cm (two to four inches approximately) of snowfall accumulation, but the Met Office warn 20cm, or eight inches, of snow could accumulate over the highest routes. 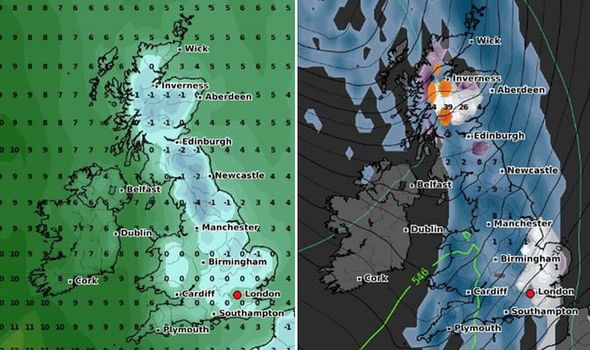 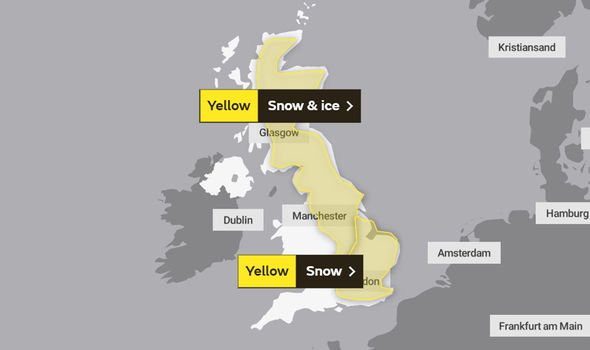 The Met Office add: “Further south the most likely scenario is for rain though there is a small chance of snow falling down to 150m or so leading to 2-5cm in places.”

The Met Office also warns of rain falling onto frozen surfaces which could cause ice.

The Met Office has also issued a yellow snow warning for parts of the east and South East on Saturday – including London.

The snow warning over London starts at 3am, and ends at 8pm. 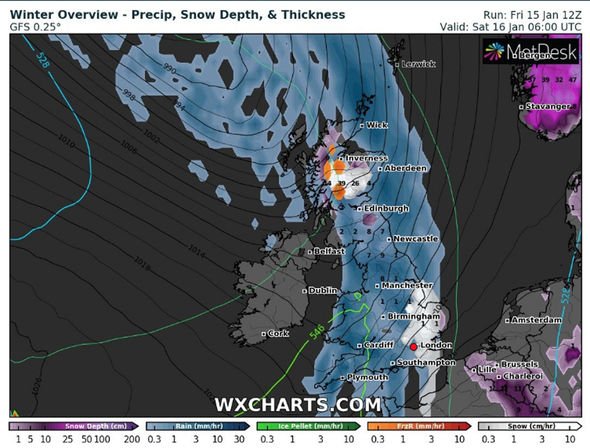 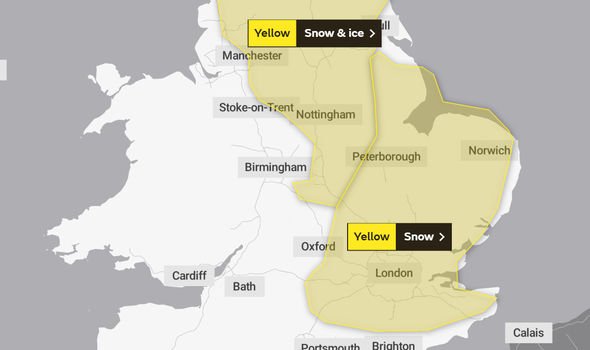 The warning reads: “An area of rain will move eastwards through Saturday and is likely to turn to snow as this runs into cold air over east and southeast England.

“Snow is likely to fall to low levels on the leading edge of the rain area before snow levels gradually rise for many from the west.

“East Anglia and parts of Kent and Sussex look most at risk of seeing snow for longest.

“1-3 cm of snow may fall fairly widely over these areas with 5-10 cm possible in places, mostly over parts of East Anglia and any higher ground. 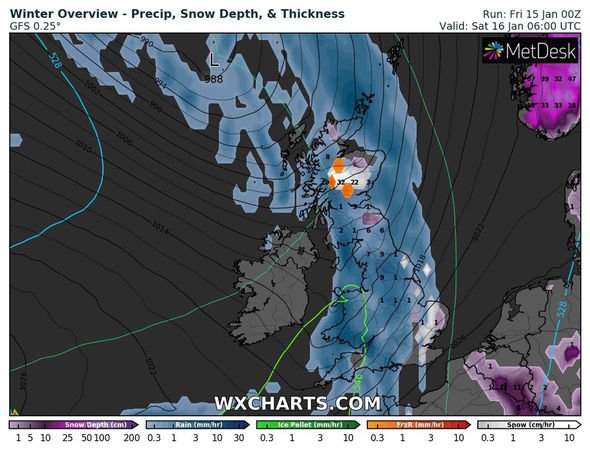 “Given recent wet weather and high river levels with rain and snow falling, then melting some flooding impacts are also possible.”

WXCHARTS weather maps, which use data from MetDesk, show northern parts of the UK are expected to see the most snow over the coming days.

But weather maps also show London could see some snow today and on Saturday. 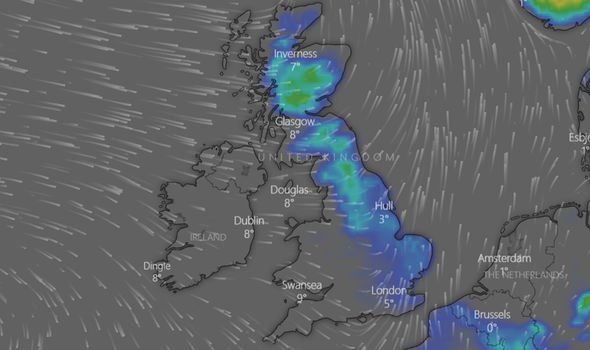 Snow depth maps from Windy also show some snow depth for London on Saturday, but any snow over the capital isn’t expected to be as heavy as in areas of northern England and Scotland this weekend.

The Met Office forecast for London and the South East for Friday night states a “band of rain” could possibly fall “as snow on hills”.

But on Saturday, only some “temporary snow” could be making an appearance in the South East.

The Met Office forecast for Saturday states: “Cloudy and windy with a band of rain moving eastwards.

“This may produce some temporary snow across higher ground, but is likely to turn increasingly to rain before clearing later. Maximum temperature 6C.”

The UK could see even further snowfall next week, as rumours abound of a second ‘Beast from the East’ striking Britain.

Due to a weather phenomenon known as sudden stratospheric warming, the heavy snowfall during the 2018 Beast from the East caused a number of deaths and widespread disruption across the UK.

Earlier this week, Met Office meteorologist Alex Burkhill said there is “very much a possibility” of a Beast from the East 2 in the “middle of next week”.

He said “what we’d need is a blocking area of high pressure, particularly to the north of the UK, and that would then drag in that cold easterly wind”.

The meteorologist added: “There are some signs that we could get something similar to that during the middle part of next week so that’s what we’re looking out for.”

With 2021 already off to a chilly start, bookmakers Ladbrokes make it a 1/3 shot for this to be the coldest winter ever, and 3/1 for winter 2021 to be the wettest on record.

Alex Apati of Ladbrokes said: “Temperatures are tumbling and with torrential rain now battering Britain, there’s every chance this goes down as the wettest winter ever.”