Britons have shared frighteningly beautiful images of lightning strikes overnight as many areas of Britain saw thunderstorms affecting their areas. Forecasters predict significant thunder and lightning to strike several areas of the country after more than a week of 30C weather. So where exactly will lightning storms hit today?

The stiflingly hot weather is due to continue across the UK with heatwave conditions creating an ideal environment for thunderstorms for many.

The Met Office has issued three weather warnings for Wednesday and Thursday advising of heavy rain and increasing risks from flash flooding, lightning and hail.

It is formed because within a thundercloud there are many small bits of ice, which are created when tiny water droplets turn to ice, bump into one another as they move around in the air.

All of those collisions create an electric charge and after a while, the entire cloud is filled with electrical charge which causes lightning. 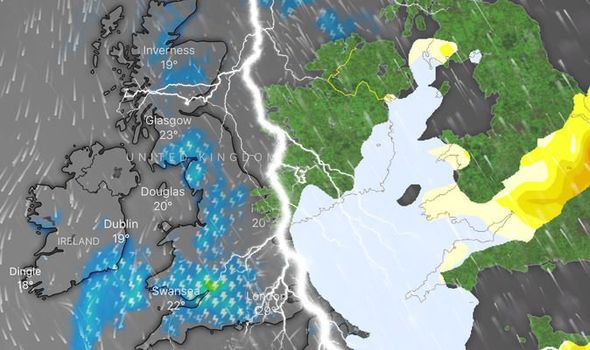 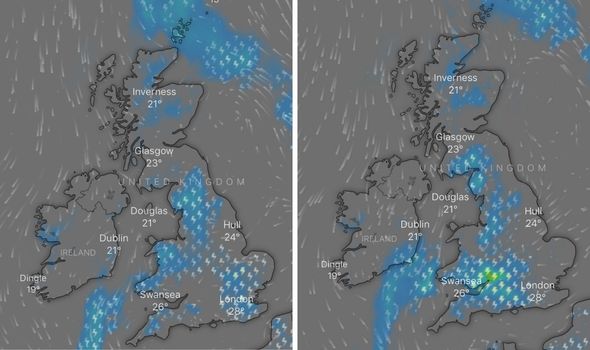 The Met Office forecast for today advises of early thundery rain clearing northeast Scotland during the morning, perhaps a few thunderstorms redeveloping later over the Highlands.

Elsewhere conditions will still be hot or very hot, but the heatwave conditions will be broken up with scattered but possibly intense thunderstorms developing during the afternoon into the evening.

Through Wednesday night conditions will become increasingly cloudy in the north, but will stay mostly dry.

Thunderstorms will perhaps develop over Northern Ireland and southern Scotland later on.

There is likely to be some sporadic thunderstorms continuing for England and Wales.

Generally, it will be another very warm night for many. 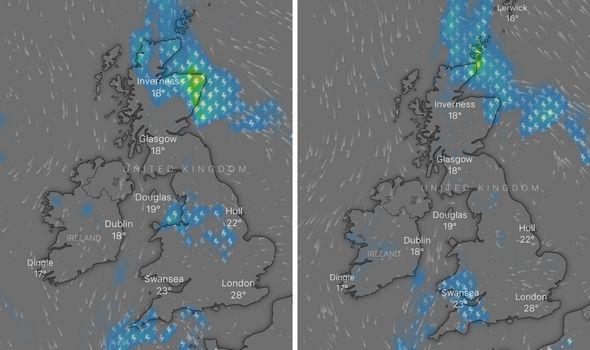 Where will lightning storms hit today?

Two weather warnings have been put into force by the Met Office for Wednesday.

The first is a rare amber warning advising of an area of thunderstorms which is likely to bring some flooding and disruption to power supplies overnight into Wednesday.

The warning is in effect from Tuesday at 10.59pm until 9am on Wednesday and covers the Scottish regions of Central, Tayside and Fife, Grampian and Southwest Scotland, Lothian Borders.

The second yellow weather warning is in effect across much of the UK and advises of some regions which are likely to see further severe thunderstorms, but with significant uncertainty in location and timing.

The warning, which is in force from midnight to 11.59pm on Wednesday, advises of a small chance of homes and businesses could be flooded quickly, with damage to some buildings from floodwater, lightning strikes, hail or strong winds.

For the region covered by the warning, the forecaster warned that many parts will see a good deal of dry weather, but areas of thunderstorms are likely to develop over parts of the UK or nearby continent.

These thunderstorm conditions will generally track north or north-westwards, potentially affecting many parts of the UK at some point.

Eastern Scotland looks most at risk during the early hours of Wednesday, then southern parts of the UK see the risk increasing later in the day. Where the storms occur the will be intense.

Rainfall totals of up to 1.6 inches (40mm) could fall in an hour, with some locations potentially receiving up to 3.1 inches (80mm) in three hours, although these will be fairly isolated. 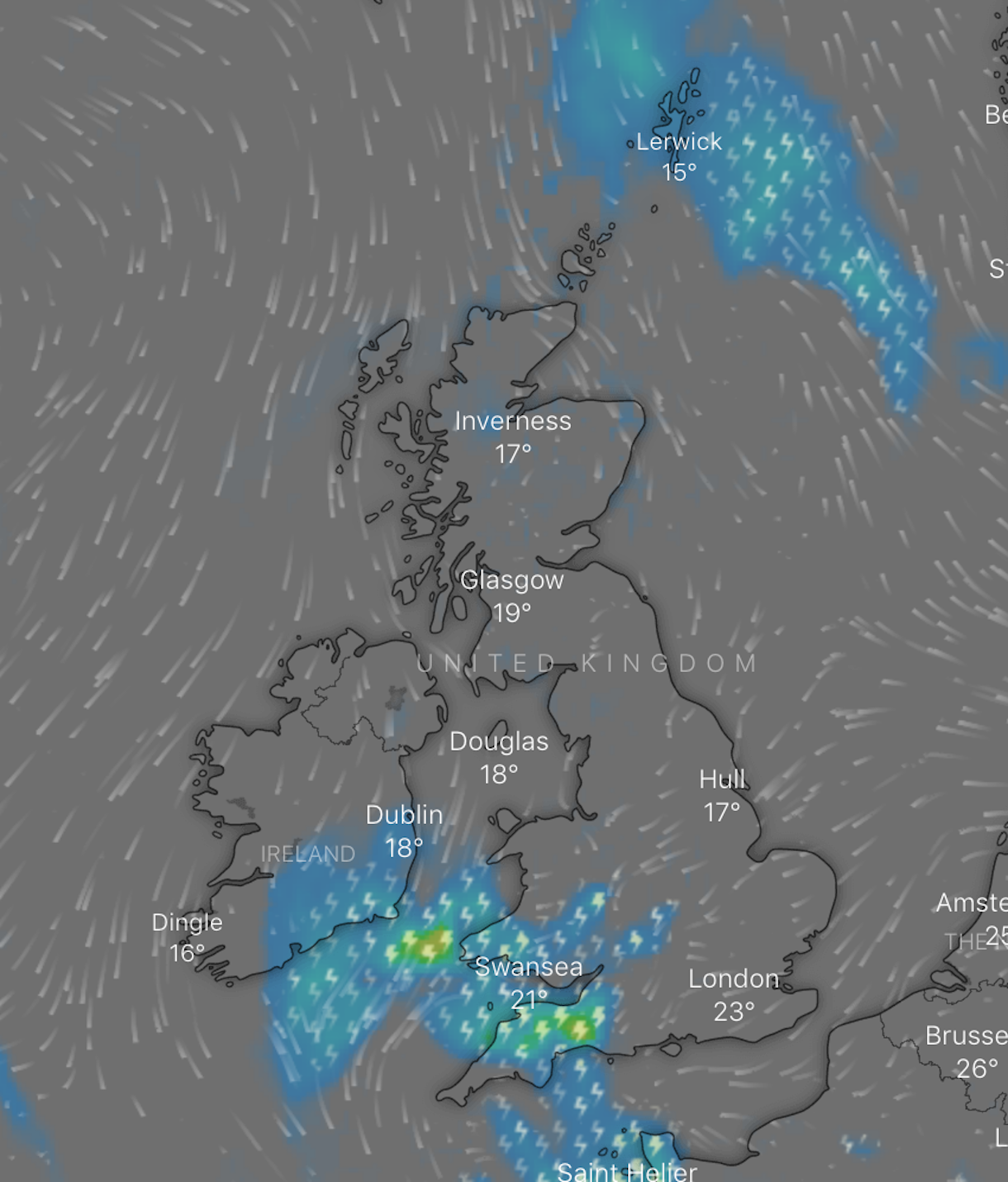 Western and southern parts of Wales, areas of the south west of England, south east and parts of East of England are likely to see lightning strikes around 10am on Wednesday according to weather forecaster Meteoradar.co.uk.

The lightning is likely to intensify by 1pm and will move to impact more areas of Wales and western England by 4pm.

All of Wales is likely to see lightning strikes by 7pm on Wednesday and the lightning is expected to move across the midlands and parts of northern England by 10pm today covering much of the country.

Forecaster Windy.com paints a similar picture with areas across northern Scotland, parts of central England and the southwest should see lightning around 10am on Wednesday.

By midday through to the 2pm, the forecaster predicts northern Scotland, southwestern Wales and the southeast of England to see thunder and lightning hit.

Heavier rain and lightning is expected to hit across large areas in the UK by 5pm on Wednesday with areas in the southeast, northern Wales and northern England likely to see the worst of the thunderstorms.

By 8pm southern Wales and the southwest of England will likely see lightning storms hit with conditions continuing through to midnight.