Protests had erupted after the election on October 4 was won by parties loyal to Jeenbekov but opponents said was hit by vote-buying. The results were later annulled but this did not quell the tensions.

‘I am not clinging to power. I do not want to go down in the history of Kyrgyzstan as a president who allowed bloodshed and shooting on its people. I have taken the decision to resign,’ Jeenbekov said.

More than 1,200 people were injured and one killed during the clashes in the wake of the elections between protesters and police. 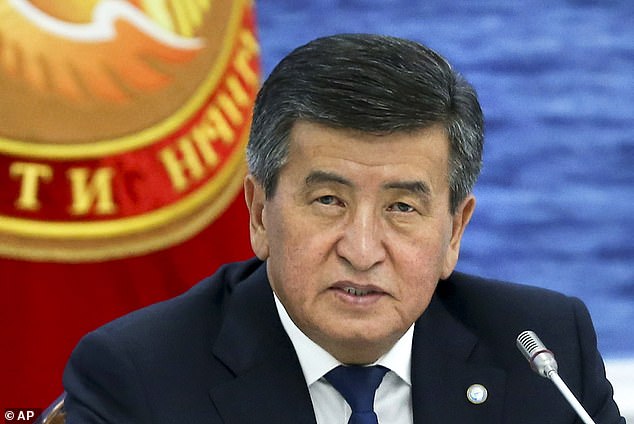 The move came as supporters of prime minister Sadyr Japarov – who was serving jail time for hostage-taking only last week – gathered once more today to demand Jeenbekov’s immediate resignation.

‘The current situation is close to a two-sided conflict. On the one hand, the protesters, on the other, the law enforcement agencies,’ Jeenbekov said in his statement.

‘Military personnel and law enforcement agencies are obliged to use weapons to protect the residence of head of state.

‘In this case, blood will be shed. It is inevitable. I urge both sides not to succumb to provocations.’

The president had on Wednesday finally accepted the nomination of Japarov as prime minister, in a move seen as the first step towards calming the crisis. But Japarov insisted that the president should step down. 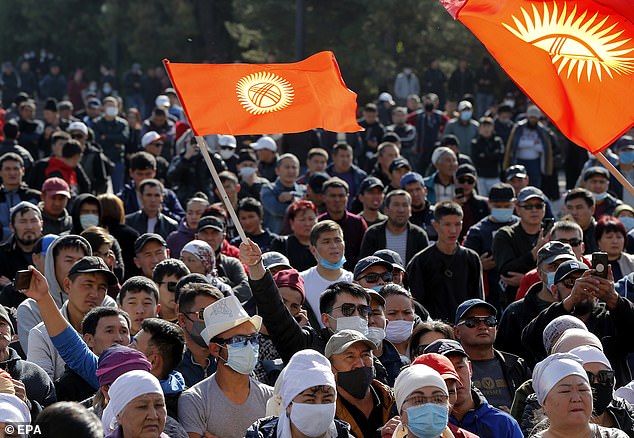 Protests had erupted after the election on October 4 (pictured, people waving flags outside a government building in Bishkek on Wednesday)

Jeenbekov called on Japarov and other politicians ‘to withdraw their supporters from the capital of the country so the people of Bishkek (can) return to a peaceful life.’

Jeenbekov had previously pledged to resign after overseeing fresh parliamentary elections in the country. But Japarov and his supporters pressed for an immediate resignation.

Kyrgyzstan has been dogged by political volatility for much of its three decades of independence.

A landlocked republic of 6.5million people, it has now seen three presidents unseated by unrest since gaining independence from the Soviet Union in 1991.

The chaos has worried its ally Russia, coming as post-election protests rock ex-Soviet Belarus and clashes persist over the breakaway Nagorno-Karabakh region of Azerbaijan.

Vladimir Putin’s deputy chief of staff Dmitry Kozak flew in for talks with Jeenbekov and Japarov this week, with Moscow emphasising that the chaos must be brought to an end.