Home » World News » Kushner: Palestinians not yet capable of governing themselves 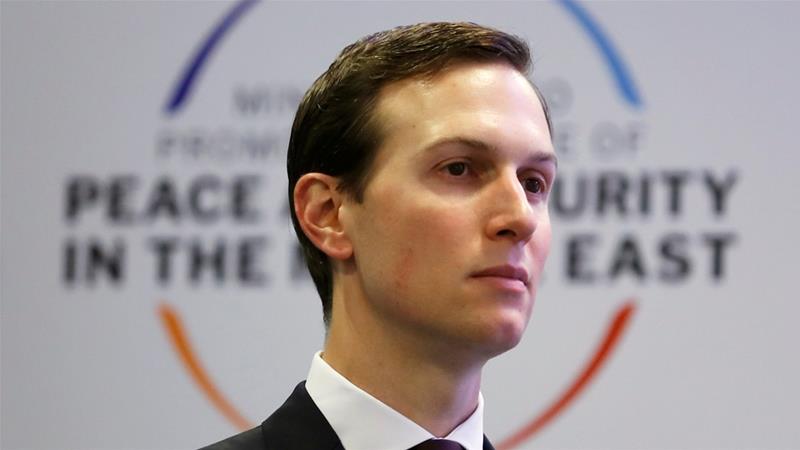 White House Senior Adviser Jared Kushner has said that the Palestinians deserve “self-determination,” but stopped short of backing Palestinian statehood, expressing uncertainty over their ability to govern themselves.

Kushner, who is President Donald Trump’s son-in-law, made the comments in a television interview with the Axios on HBO programmes, broadcast on Sunday.

The Palestinians, he said, “need to have a fair judicial system … freedom of press, freedom of expression, tolerance for all religions” before the Palestinian areas can become “investable”.

One of the architects of the United States’s yet-to-be-released Middle East peace plan, Kushner said it would be a “high bar” when asked if the Palestinians could expect freedom from Israeli military and government interference.

The Palestinian leadership has boycotted the diplomatic effort that Trump has hailed as the “deal of the century”. Although Kushner has been drafting the plan for two years under a veil of secrecy, it is seen by Palestinian and some Arab officials as tilting heavily in Israel’s favour and denying the Palestinians a state of their own.

In Sunday’s interview Kushner again avoided saying explicitly whether the plan would include a two-state solution, the bedrock of US policy for decades.

“I do think they should have self-determination. I’m going to leave the details until we come out with the actual plan,” Kushner said.

Last month, Kushner indicated that the US would be pulling back from its long-standing support of the two-state solution.

“We said, you know, let’s just not say it. Let’s just say, let’s work on the details of what this means”.

Part of the plan is expected to be unveiled at a US-sponsored investment conference in Bahrain this month.

The Palestinian Authority has said it will not attend the event.

‘Not here to be trusted’

US officials have been vague about the timing for releasing proposals for resolving the political issues of the Israeli-Palestinian conflict, but experts are sceptical of the Trump administration’s chances for success.

The Palestinian leadership has refused to deal with the Trump administration since late 2017 when Trump decided to move the US embassy from Tel Aviv to Jerusalem and recognised Jerusalem as the capital of Israel.

The Palestinians demand Jerusalem’s eastern sector as the capital of their long-promised state, while Israel insists that the whole city is its “eternal, indivisible capital”.

With Israel heading for new elections in September after Prime Minister Benjamin Netanyahu failed to form a government, uncertainty is expected to further delay the plan’s rollout.

He said he believed the Palestinian people would judge the plan based on whether “they think this will allow them to have a pathway to a better life or not.”

Secretary of State Mike Pompeo delivered his assessment of the plan’s prospects in a closed-door meeting with Jewish leaders last week, saying: “One might argue” that it is “unexecutable” and it might not “gain traction,” according to an audio recording, the Washington Post reported on Sunday.

Pompeo did express hope, however, that the deal was not simply dismissed out of hand, the Post reported.

“We’re doing out best to help the Middle East to get a peace plan,” Trump told reporters when asked about the Pompeo recording. “I understand why [Pompeo] said that. Most people would say it can’t be done. I think it can be done”.