Russian opposition politician Dmitry Gudkov has accused authorities of arresting him and other Kremlin critics on trumped-up charges in a bid to stop them running in September’s parliamentary election.

Gudkov was held in custody for two days this week.

Police in Moscow released the 41-year-old former member of parliament on Thursday, but he remains a suspect in a criminal case filed over allegations that he failed to pay a debt on a rented property. 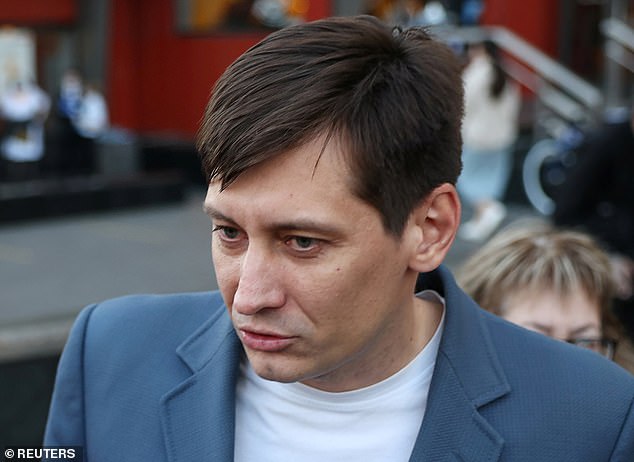 Gudkov, who denies any links to the property, told Reuters in an interview on Friday that the charges against him were designed to curb his political ambitions.

‘This was a decision not to let (me) run for a seat in the State Duma (lower house) and in elections made at the highest level,’ Gudkov said, adding that police had searched his home and arrested his aunt during this week’s operation.

‘I honestly didn’t expect they would take my aunt hostage,’ said the former MP, who regularly appears at anti-Kremlin protests in the capital.

The Kremlin has said recent arrests of politicians such as Gudkov have nothing to do with politics, and denies trying to clear the field of political opponents.

Gudkov’s arrest on Tuesday coincided with that of Andrei Pivovarov, another opposition figure, who was removed from a flight about to leave for Poland. 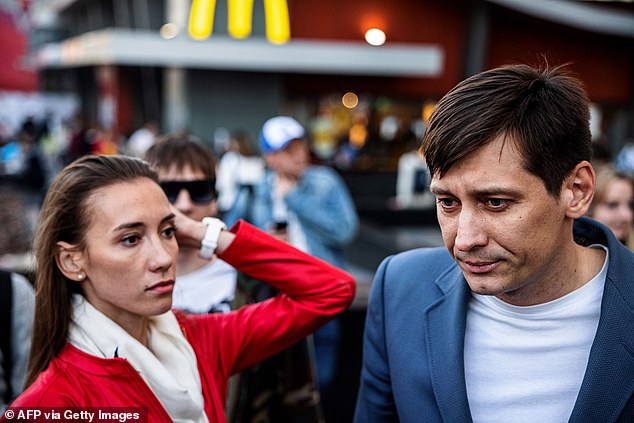 Prominent Russian opposition activist and former lawmaker Dmitry Gudkov and his wife Valeria speak to journalists after being released without being formally charged, in Moscow on June 3

Police questioned Pivovarov, searched his apartment and opened a criminal case against him for allegedly violating Russia’s legislation on ‘undesirable organisations.’

Pivovarov was the director of Open Russia – a now defunct opposition group linked to exiled former oil tycoon and Kremlin foe Mikhail Khodorkovsky – which halted its operations in Russia last month, saying it wanted to stop its supporters from being prosecuted.

Gudkov cited Pivovarov’s arrest and the house arrests of many close allies of jailed Kremlin critic Alexei Navalny as signs the authorities were trying to rein in the opposition before it could mount a challenge in the September vote.

A new law signed by President Vladimir Putin on Friday bars members of ‘extremist’ groups from running for office. The law’s adoption came days before a court considers outlawing Navalny’s anti-corruption foundation and regional campaign groups on the grounds they are extremist.

The legislation effectively derails the parliamentary election campaigns announced by some Navalny allies.

Gudkov, who is also due to appear in court next week over his participation in an unauthorised street protest in support of Navalny, said he was concerned he could also be targeted under the new law.

‘I understand perfectly that this is not the end,’ he said.