A former Penrith rugby league player has been sentenced to at least nine years jail for his “very senior” role in a major drug importation and supply syndicate in a case that saw the judge grapple with the impact of a lengthy jail term on someone suffering a sport-related brain injury.

Levi John Russell, a first and reserve grade player with the Panthers from 1994-98, was sentenced in the District Court on Friday after pleading guilty to charges relating to the importation of hundreds of kilograms of methamphetamine and commercial supply of cocaine between 2017-19. 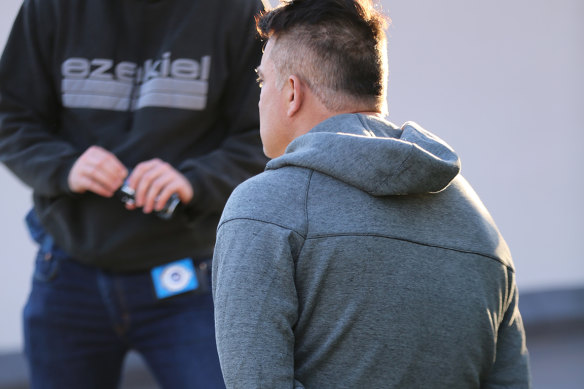 Some charges carried the potential for life imprisonment.

The consideration given to Russell’s brain injury on sentencing comes amid a public debate over the impact of sports-related long-term brain injury in the community. 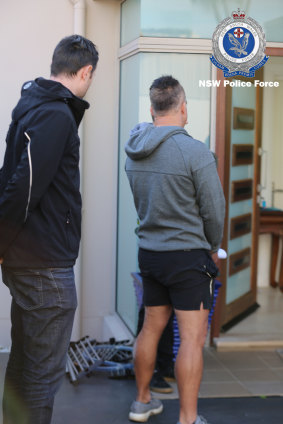 Levi John Russell was arrested in 2018 and has been sentenced to a non-parole jail term of nine years.Credit:NSW Police

Russell was arrested at his luxury Terrigal home in 2018, following the discovery of $8 million of ice hidden in industrial equipment addressed to his business.

The arrest formed part of a police investigation into large-scale organised drug importation and supply syndicate operating on the NSW Central Coast.

Key players in the syndicate rolled on Russell and gave statements to police after cooperating with prosecutors.

In a published judgment, District Court judge Andrew Scotting made “a finding of special circumstances”, including because Russell “suffers from cognitive deficits arising from repetitive concussions and subconcussive head impacts”

The judge detailed how between April and November 2017, Russell, who ran an earthmoving business called Russtrans, was part of a syndicate that imported more than 200kg of methamphetamine from Malaysia in compressor heads, heavy machinery that usually house the piston assembly in a combustion engine.

Other shipments were secreted in a heavy duty hydraulic cylinder in October 2017 that contained 70kg of methamphetamine. Hydraulic cylinders are typically used in the construction of bridges and not an item used by Russtrans.

Days after the cylinder arrived and was detected by authorities, Russell would travel to Singapore. A witness would claim Russell told him the shipment contained drugs and that he travelled overseas so that he could deny knowledge of that.

The police case detailed how members of the operation used encrypted messaging apps and devices ranging from BlackBerrys to Ciphr and WhatsApp as part of the importing and supply operations. Witnesses wore wire taps during supply operations, the court heard.

Drug handovers would be conducted in open locations such as at the Tuggerah exit of the M1 motorway.

The court heard that Russell’s family would question his purchase of a $300,000 Mercedes Benz vehicle.

Judge Scotting found that a custodial sentence was warranted given premeditation and planning, that he had actual knowledge of the drugs involved and amounts, that he had contact with others overseas with the capacity to source drugs, and that the offences weren’t isolated.

The judge considered the expert evaluation of neuropsychologist, Dr Susan Pulman, who reviewed Russell’s medical history, including brain scans. Russell, who had displayed symptoms including memory loss, aggression and seizures, had also suffered head injuries off the playing field including outside a pub in a 2018 assault.

Dr Pulman told the court “that based on his history of documented head injuries and the subconcussive impacts incurred as a professional athlete, the abnormal results of the neuropsychological testing and the neuroimaging which demonstrated a reduced cerebral blood flow consistent with CTE [chronic traumatic encephalopathy], that the offender was suffering from the neuropsychological sequelae of repetitive brain trauma, and that condition was longstanding and was present at the time of the offending conduct.”

In sentencing, Judge Scotting accepted that Russell “is suffering from the neuropsychological sequelae of repetitive brain trauma”.

“I am satisfied that his condition will make his time in custody more onerous. The treatment that is presently available for the offender’s condition is specialised and more readily available in the community.

“I am satisfied that it is likely that his condition will deteriorate in the next ten years and that a prolonged period of incarceration is likely to accelerate his decline.

“I note that it is possible that he has already developed CTE, but the present state of medical science does not allow a definitive diagnosis to be made.

“I am satisfied that if the offender develops dementia that his life expectancy would be significantly shortened and that if he develops dementia whilst in custody, his continued incarceration will accelerate the progress of the disease.”

Conspiracy to import a commercial quantity of a border control drug can be punished by life imprisonment. Russell pleaded guilty and was entitled to a discount on sentencing.

Judge Scotting sentenced Russell to a 16-year headline term with non parole of nine years. With time served on remand, he will be eligible for parole in 2028.