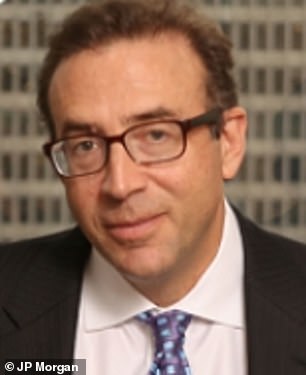 A top investment guru at J.P. Morgan has warned of a ‘nightmare scenario for markets’ if President Donald Trump were successful in his longshot attempts to overturn the results of the election.

In a note to investors on Wednesday, Michael Cembalest, the chairman of market and investment strategy for J.P. Morgan Asset Management, warned of ‘the remote risk of an American Horror Story.’

Though the Dow Jones Industrial Average hit an all-time high this week on news of effective coronavirus vaccines, Cembalest warned that undermining the rule of law through ‘electoral illegitimacy’ would send stock markets into turmoil. ‘A modest decline in the rule of law…could result in a de-rating of US equities,’ he wrote.

Cembalest laid out a number of complex scenarios in which state governments might submit competing slates of electors to Congress, leading to dueling inaugurations on January 20 and an unprecedented breakdown of American democratic institutions. 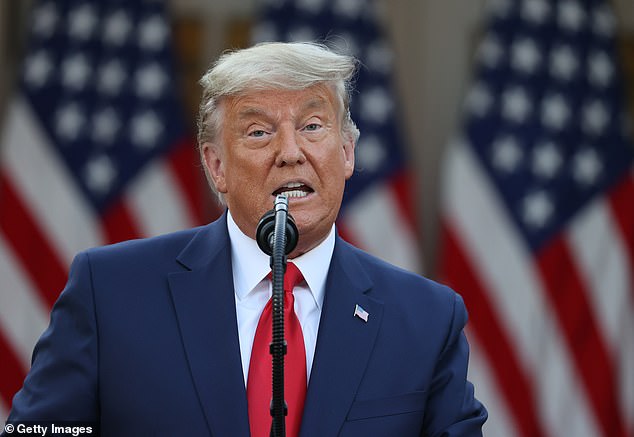 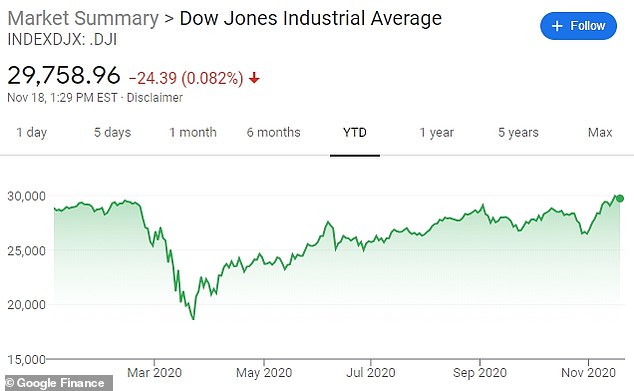 A year-to-date view of the Dow, which reached record highs this week

Cembalest has spoken critically of Trump in the past, and records show his only recent political donation was to a Democrat running for U.S. Senate.

However, his latest argument is not that Trump himself is bad for markets, but rather that the chaos and uncertainty of undermining the electoral process would damage the valuation of U.S. companies.

Cembalest is responsible for leading the strategic market and investment insights of JP Morgan Asset Management, which has $2.2 trillion of client assets under management.

As it stands, Democrat Joe Biden is projected to win 306 Electoral College votes to Trump’s 232.

Each state has its own deadline for certifying its election results, and state electors will meet in each state capital on December 14 to cast their votes based on the certified results. Those votes are sent to Congress, which will meet on January 6 to certify the Electoral College votes.

In one scenario Cembalest lays out, Republican legislatures in states that Trump lost might submit a competing slate of electors.

‘While there’s no explicit authority granted to them, a Governor or Secretary of State could also submit a competing slate,’ Cembalest writes.

He notes that competing slates are extremely rare, and only occurred once in the 20th century, when Hawaii sent two slates of electors to Congress in 1960.

Under the Electoral Count Act (ECA) of 1887, competing slates would have to be resolved by Congress when it meets on January 6. 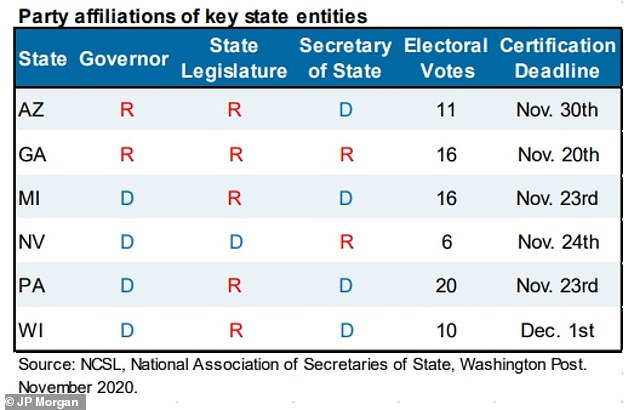 A table shows the party control of governorship, state legislature and secretary of state in key states. Trump would have to overturn results in at least three states to claim victory

Most agree that in the case of competing slates, the ECA requires Congress to certify whichever slate was signed by the governor. Democrats hold the governorship in enough contested states to assure Biden’s win.

However, Cembalest raises the possibility that the Republican Senate could reject the ECA, splitting the two houses of Congress and leaving the tiebreaking vote to Vice President Mike Pence.

‘In the nightmare scenario for markets, the ECA is jettisoned by the Senate, the GOP declares Trump as the victor by flipping 3 states, Democrats disagree and refuse to participate in the Jan 6th session, all of which sets up the prospect of dueling inaugurations, an outcome narrowly averted in 1876 and which led to the 1887 Act,’ Cembalest writes.

The investment guru also raised the possibility of other fringe scenarios, such as state canvassing boards refusing to certify results, or the Department of Justice seizing election records, preventing certification. 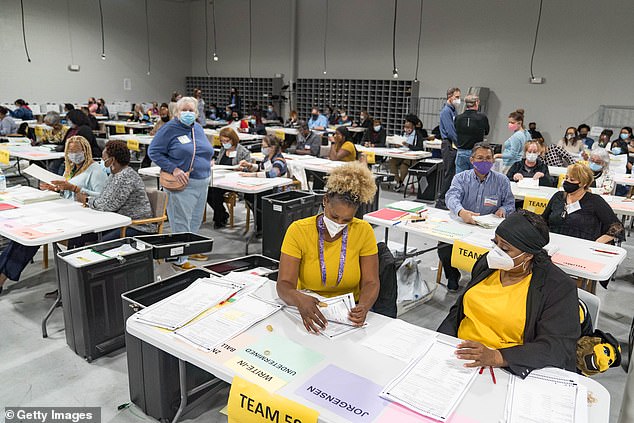 Gwinnett County election workers handle ballots as part of the recount for the 2020 presidential election in Lawrenceville, Georgia, on Monday

‘Bottom line: a LOT of very unorthodox things have to happen for Trump to be re-elected,’ Cembalest writes. ‘Based on the uncertified vote results, Trump would have to reverse or impede results in three states to prevent Biden from reaching 270 electoral votes.’

‘Even so, I’m not ruling anything out,’ Cembalest added, noting that Trump on Tuesday fired the nation’s top election security official, Christopher Krebs.

Krebs had issued a stream of public statements expressing confidence that the election had been secure.

Trump has continually claimed that pervasive voter fraud robbed him of the election in key states, though he has yet to present proof of such widespread and systemic fraud.

Cembalest concluded his note by writing: ‘I’m not going to comment on likelihood of pervasive fraud; the courts will rule on that.’

EXCLUSIVE: Universal Pictures this week began showing to taste makers News of the World, the Paul Greengrass-directed 1870s-set adaptation of