In its twice-yearly report to Parliament, the national anti-Mafia investigative agency particularly cited potential opportunities for the Camorra, saying the Naples-area crime syndicate could expand its influence toward northern and central Italy. 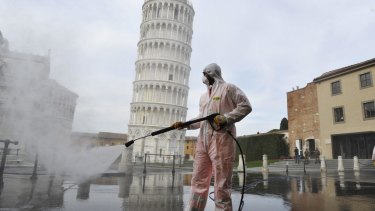 A worker carries out coronavirus sanitation operations in Pisa in 2020. The pandemic has created new opportunities for Italy’s organised crime.Credit:Getty

The Anti-Mafia Investigation Directorate (DIA) reported “an increase of cases of money-laundering and re-investing illicit money” in those areas.

Agency director Maurizio Vallone told RAI state TV that mobsters increasingly are investing in businesses weakened by COVID-19 lockdowns, with the goal of ultimately taking them over.

“We are witnessing less of the extortion, property damage, pressures” that mobsters traditionally inflict on businesses to make them pay “protection money” and to bolster crime syndicates’ influence on their territory, Vallone said. Instead, he said, some mobsters are “presenting themselves as investors” willing to pump money into foundering businesses. 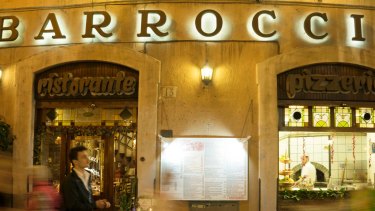 People walk by the Barroccio restaurant in Rome, a trattoria raided in 2017 as an alleged fronts for money-laundering operations for the `ndrangheta.Credit:AP

In separate comments to Italian news program TG5, Vallone referred to the €209 billion euros ($319 billion) Italy expects to receive in European Union pandemic recovery funds. The money is intended to help shore up Italy’s health care system and to boost economic recovery through investment in digitalisation, ecological transition and other projects.

Investigators noted the speed in which Italy has been doling out recovery relief to compensate businesses for losses aggravated by government-imposed restrictions during the pandemic, such as restaurant, cafe, gym and theatre closures.

While Italy for years has had a complex process of scrutiny in awarding public works contracts aimed at discouraging organised crime infiltration, the sheer amount of new projects could put those safeguards at risk.

“All this will constitute serious risks of mafia infiltration in the legal economy, especially in the health sector that represents an area of interest of enormous amount” and is “thus appetising even for the social control that this can offer” in the territory of crime syndicates, the report states.

Vallone suggested that Parliament might need to enact legislation to further reduce the possibility of Mafia infiltration.

With Italy’s economy largely flat for a good decade even before the pandemic ravaged Italy, south-based crime syndicates, in particular the ‘ndrangheta, a global cocaine broker, have invested ill-earned revenues in “clean” businesses such as hotels and restaurants.

With tourism pummeled by the pandemic, crime syndicates could be looking for other revenue streams.

Italy’s various mafias have taken on “the very characteristics of a business enterprise, if not actually those of a holding company that is constantly looking to expand, even while maintaining unchanged its very criminal essence,” DIA said.