Palermo: Italy’s right-wing former interior minister, Matteo Salvini, has called into question the trial in which he is charged with kidnapping for refusing to allow a Spanish migrant rescue ship to dock in Sicily, after Hollywood actor Richard Gere was called as a witness.

It is the first trial to go ahead against Salvini for his actions preventing migrant landings while he served as interior minister from 2018-2019 in an uneasy coalition between the populist 5-Star Movement and his right-wing League. 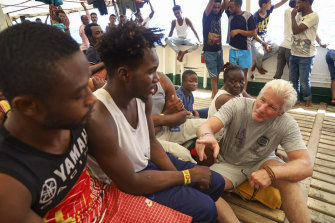 Salvini was present for the opening day of the trial in Palermo, Sicily, at which prosecutors revealed that among those being summoned is Gere, who visited the migrants aboard the Open Arms after seeing their plight while on a family vacation in Italy.

“It is surreal undergoing a trial because I did my job. I feel sorry because, I mean, tell me how serious can be a trial where Richard Gere will come from Hollywood to testify about my career,” said Salvini at the opening day of the trial in Palermo, Sicily.

It is not clear whether Gere, the star of films such as Pretty Woman, An Officer and a Gentleman and Chicago, will appear in person to give evidence at the trial. Other witnesses called include former prime minister Giuseppe Conte, and a number of senior Italian politicians. 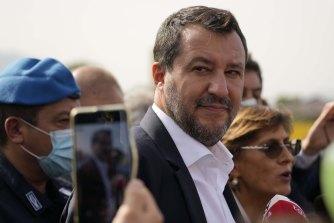 Former minister of interior Matteo Salvini and his lawyer Giulia Bongiorno talk to journalists outside court on Saturday.Credit:AP

Salvini, who has built much of his political fortune on an anti-immigration campaign, said he simply did his duty as a minister by refusing entry to the Open Arms rescue ship, and the 147 people it had saved in the Mediterranean Sea off Libya.

“Defending a country’s borders, security, honour and dignity is not just a minister’s duty but everyone’s duty,” he said.

“A Spanish boat refusing to go to Spain commits an abuse,” he added. “If Spain gives its flag to boats it does not manage to control, then there is a problem”.

Prosecutors accuse Salvini of dereliction of duty and kidnapping for refusing to allow the ship into port for days in August 2019. During the nearly three-week standoff, some migrants threw themselves overboard in desperation and the captain pleaded for a safe, nearby port. Some migrants were taken to land for humanitarian or health reasons, while the remaining 83 were eventually allowed to disembark in Lampedusa.

“We expect justice for the unnecessary suffering that all the people had in those 20 days,” said the head of the Spanish NGO Open Arms, Oscar Camps.

A court in Catania, Sicily, earlier this year decided not to try Salvini in a similar case, for keeping 116 migrants on board an Italian coast guard ship at sea for five days, also in 2019.

Salvini could face up to 15 years in prison if found guilty at the end of a long three-stage judicial process.

A definitive conviction could bar him from future government office.