Thousands rally outside the prime minister’s official residence as protests mount over his handling of the pandemic. 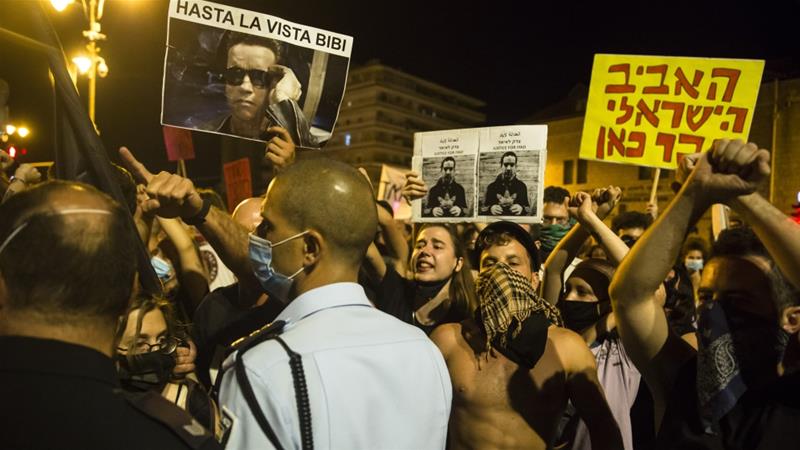 Dozens of Israeli demonstrators have been arrested after chaining themselves together and briefly blocking the entrance to Parliament, as protests against Prime Minister Benjamin Netanyahu and his government grow louder.

The gathering in West Jerusalem on Wednesday was called to protest against an upcoming vote to grant the government sweeping authority to bypass the Knesset – Israel’s parliament – in enacting measures to combat the rapid spread of the new coronavirus. At least 34 protesters were arrested.

It came the morning after a night of intense street protests, in the latest outpouring of discontent with Netanyahu and his government over the handling of the pandemic. Public anger has been compounded by corruption allegations against the long-serving prime minister, who went on trial in May for bribery, fraud and breach of trust – charges he denies.

The protests have since drawn a younger crowd and have grown more defiant. In the past week, thousands of Israelis have participated in some of the largest anti-government demonstrations in nearly 10 years.

Netanyahu has come under growing criticism for holding office while on trial for corruption, pushing for seemingly anti-democratic measures under the guise of combating the virus and mismanaging a deepening economic crisis.

The government has also been accused of issuing contradictory guidelines that have only further stoked the anger of everyday citizens.

On Tuesday night, a large coalition of protest groups combined to march through the streets of Jerusalem from Netanyahu’s residence to the Knesset. They beat drums, banged on pots and blared on trumpets while calling on the prime minister to resign.

“It’s humiliating and insulting. You pay social security and taxes for thirty years and then have to beg (the authorities) in order to make ends meet. I’m here to protest, so that this evil government quits,” Doron, a 54-year-old protester, was quoted as saying by Reuters news agency.

He said he has been on unpaid leave for three months. 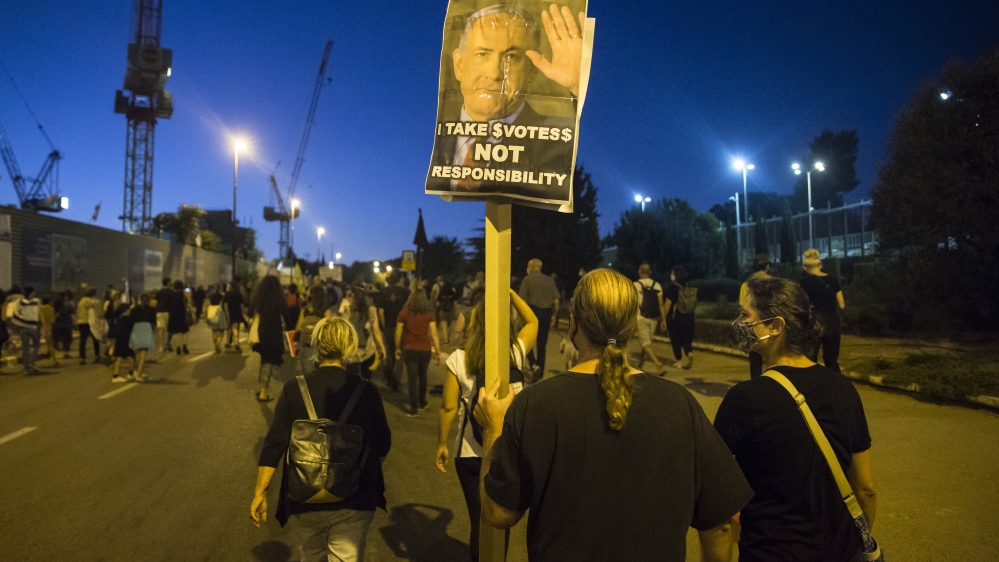 Israel in May lifted a partial lockdown that had flattened the infection curve. But a second surge of COVID-19 cases and ensuing restrictions have seen Netanyahu’s approval ratings plunge to below 30 percent and unemployment soar to 21 percent.

“The concern now is that it’s too late in terms of testing to catch up with the sheer scale of the second wave,” said Al Jazeera’s Harry Fawcett, reporting from Tel Aviv.

“Israel’s missed opportunity on testing and contact tracing is now seen as a wider political failure to tackle the pandemic.”

An economic aid plan announced by Netanyahu last week, which would see hundreds of dollars handed out to every Israeli household, was widely condemned by economists and has hit a snag in Parliament.