An apartment complex under construction in Sydney’s north-west has undergone an urgent inspection after allegations of serious building defects were aired by a whistle-blower.

The Skyview apartment complex in Castle Hill, developed by the Toplace Group, comprises of five towers and boasts of “aspirational, green living and an enviable lifestyle for everyone,” the website for the project reads. 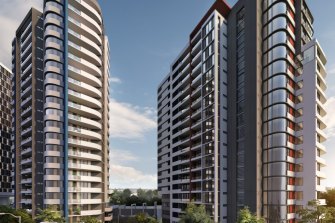 The government is aware of “allegations of serious defects existing at the Skyview Building” in Castle Hill.

The allegations were aired in photos sent to the ABC of the development’s basement during construction earlier this year by a whistle-blower.

A spokesperson for Minister for Better Regulation Kevin Anderson said the government was “aware of the allegations of serious defects existing at the Skyview Building, Castle Hill, which is still under construction.”

“As soon as the government was made aware of the issues it notified the Office of the Building Commissioner to request an urgent inspection be undertaken.”

NSW Fair Trading sent a team of authorised officers to the site in April and their inspection confirmed the existence of structural issues that would require specialist engineering advice, the spokesperson said.

“It also confirmed that the newly appointed private certifier was appropriately handling the matter.”

The certifier has issued a Written Direction Notice under the Environmental Planning and Assessment Act which requires the appointment of an independent engineer to undertake a review of the site.

“Fair Trading and the Office of the Building Commissioner will continue to closely monitor the situation and has advised the certifier that it must be regularly updated on progress and provided copies of all reports.

“Fair Trading is also undertaking an audit of the remainder of the project and will refer any concerns to the certifier in the first instance.”

A Toplace Group spokesperson told the ABC on Thursday the company rejected the allegations of structural problems and allowed the media company to tour the building.

The spokesperson said the issues were first raised in January 2020 and one engineering firm sourced by the company had given its own tick of approval over the remediation work, while another company provided a peer review.

“Remediation works began at that time with design solutions. Continued inspections and monitoring occurred and first physical works occurred mid-2020. Remediation work occurred from January 2020 and were completed before 22 February 2021.”

The company did not immediately respond to the Herald’s request for comment.

A spokesman for the NSW Building Commissioner David Chandler said they were aware of the allegations.

“The private certifier is currently engaging a specialist building consultant to undertake an
independent third-party assessment of the matter,” the spokesperson said.

“The findings of that report will later be published as they will form part of the issuance of an Occupation Certificate.”

“The Office of the Building Commissioner will continue to support the work of the private certifier and undertake an Occupation Certificate audit of the entire building to ensure that the interests of customers are protected.”