A 74-year-old woman has been left feeling “nauseous and dizzy” after a helicopter rescue in the US went wrong.

The woman was being airlifted off a mountain near Phoenix, Arizona for hospital treatment after suffering face and head injuries while hiking.

She then found herself in an out-of-control spin lasting around 40 seconds.

Video footage of the incident went viral and was viewed thousands of times after it was posted on ABC15’s Facebook page.

It shows the basket spinning at high speed as the helicopter tries to move away from Piestewa Peak. 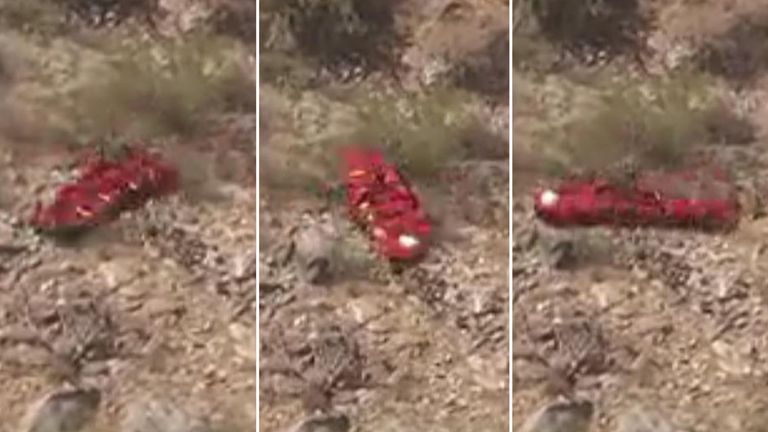 Authorities say the woman was left feeling “nauseous and dizzy” but thankfully suffered “no ill effects from the spin”.

Phoenix Fire Department Assistant Fire Chief Shelly Jamison said: “We do mountain rescues all of the time, but this particular one gathered quite a bit of attention because during the rescue, she was packaged on a hoist in a basket and she started to spin.”

The spinning is not unusual, Paul Apolinar, chief pilot of the police department’s aviation unit, explained. “We have a line attached to the basket that’s supposed to prevent that. Today it didn’t.”

At first, the basket and the woman swayed before starting to rotate at increasing speed as the chopper crew brought the basket closer to the rotors.

Mr Geisel said: “When they start to lower the load, [the basket] does actually start to stop. And then we slowly brought it back up, it gets into the same downwash from the aircraft and it started to spin again.”

“Once we got the forward flight, the spin got to the point where they were safely able to bring the patient up to the aircraft,” he added.

“[The potential for the basket to spin] is something that’s a known phenomenon in the hoist rescue industry,” Mr Apolinar said.