Home » World News » ‘I can’t do this any more’: The lockdown lament that must be addressed

“I can’t do this any more” were the most spoken words in Melbourne last week.

As September turned into October, and the reality hit that there are still weeks of lockdown in front of us, shoulders sagged and spirits sank. 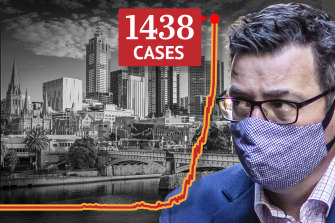 The Andrews government seems to have run out of ideas on how to motivate the community to stay committed to the lockdown strategy. The overwhelming proportion of the population are getting vaccinated, wearing masks and not gathering in secret to play, pray or party.

Sadly, though, there are enough people taking liberties with their liberty to significantly erode the progress achieved by the compliant majority.

Exhausted and despondent, many have hit their limits. As the Premier said at his umpteenth press conference, it makes no sense to wish the pandemic to be over while you continue to do the things that mean it will last longer.

But appealing to logical and rational thought is pointless – these are emotional decisions. If there is the slightest hope of influencing people’s behaviour, it requires an emotional connection.

The Premier is sounding like a broken record. The “Daily Dan” press conference is no longer appointment viewing for Melburnians.

At what point do the COVID cabinet concede the strategies being used to try to influence behaviour are not working? The road map has a fundamental flaw – it is based on science not emotion. Scientists are not very good at emotions. Trust me – my late father was a scientist.

Asking people to be logical and rational is not working. The government needs to try something else. Many of those not getting vaccinated are wary and suspicious of authority – they may have unpaid fines, warrants, tax or social security debts and avoid interaction with government as much as possible. They need reassurance not finger wagging.

The COVID commander said the spike in cases has resulted from the footy finals, so do we compare the Premier to a captain who repeats the same motivational speech in the half-time huddle every game, week after week? The players stop listening – the impact wears off. 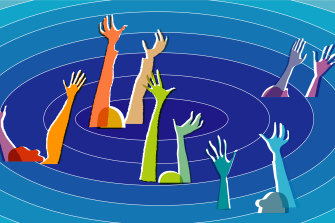 “I can’t do this any more” were the most spoken words in Melbourne last week.Credit:Illustration: Matt Davidson

To stretch the football analogy (perhaps too far) the captain has done well recovering from a mid-season back injury that threatened his entire season. But getting back on the field is only part of the challenge – getting back to pre-injury form is different altogether.

Speaking of needing to re-calibrate, a gold star and elephant stamp to Josh Frydenberg last week for executing not one but two acrobatic marvels. Pragmatically realising that the community demands climate leadership from their elected representatives, and as nothing concentrates the mind of a politician more than a looming ballot box, he made the case for net zero emissions by 2050.

Then only a few days later, in a frenzied week, the federal Treasurer also suddenly discovered the housing affordability crisis, the solution to which is apparently to hinder borrowing. Which is a bit like applying Savlon cream to a shark bite. Anything to avoid dealing with the actual problem – first home buyers being outbid by investors assisted by negative gearing, surely the most absurd and regressive tax subsidy ever invented.

If he is to have any better long-term career prospects than Australian coal miners, Frydenberg will need to reassure the voters of Kooyong that he is not a fellow traveller with the Coalition knuckle-draggers. 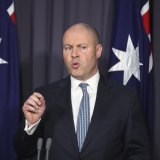 If he is one day to fulfil his self-proclaimed destiny, to realise his prime ministerial ambition, Frydenberg must first survive to be in the Parliament. Hence, the attention-grabbing speech about net zero. He may as well have bought a billboard at Camberwell Junction saying “Vote 1 Josh”.

Peter Dutton – described by Paul Keating as “the growling policeman from Queensland” in his fascinating contribution to this paper mid-week – and his supporters will already be calculating the numbers of likely survivors from a looming Morrison election loss. Will the leadership of a diminished Liberal opposition go to Melbourne or Brisbane?

And while we are looking at people changing their tune – what is the difference between cancelling a contract for a tollway road tunnel and cancelling a contract for submarines? Is underground different to underwater? The Liberals argue there is no “sovereign risk” when shafting the French sub deal, but apparently there was when Premier Andrews wastefully sank the East-West contract.

Meanwhile, the building industry restarts this week, despite the soaring new COVID numbers. Quite a few will be absent from sites – those workers stupid enough to wear company logo hi-vis to the CFMEU protest.

Many large construction companies are quietly telling any offending workers it is time for them to look elsewhere to continue their careers as they have breached every known workplace rule and are no longer welcome.

The union is asking members identified as protesters to show cause why their membership ought not be terminated.

In the deepest of ironies, some unionists being told they no longer have jobs, plus some who refuse to get vaccinated, are asking their union for support. “We can’t do this anymore,” might be John Setka’s answer too.

Jon Faine is a regular columnist. He has worked on contract for the state government.