Hell at Heathrow AGAIN! Hundreds queue for up to FOUR hours at arrivals after e-gates break down – as airport is quick to blame Border Force for chaos

London Heathrow is in the grip of border chaos yet again, with hundreds of infuriated travellers forced to wait up to four hours at arrivals in Terminals 3 and 5 or are being held on planes after e-gates crashed for the second time in less than a fortnight.

Passengers posted images of massive queues on Twitter this morning, with one traveller estimating that more than a thousand people were waiting at immigration while another reported an expected waiting time of anywhere between two and four hours.

A Heathrow spokesman told MailOnline that the e-gates broke down due to a ‘national systems wide issue’ but that they are all back up and running. The airport even appeared to be blaming Border Force, which manages the e-gates, for the bedlam.

In a statement, a Heathrow spokesman said: ‘Earlier today, a systems failure impacted the e-gates, which are staffed and operated by Border Force. This issue, which impacted a number of ports of entry, has since been resolved and the e-gates at Heathrow are back up and running again. Our teams remain on hand and are working with Border Force to monitor the situation, and to get passengers on their way as quickly as possible.’

The airport wrote on Twitter: ‘We’re aware of an issue impacting the e-gates, which are staffed and operated by Border Force. We apologise for the impact this is having on your journey. Our teams are working closely with Border Force to resolve this as quickly as possible.’

It comes less than a fortnight after e-gates failed at airports across the UK including Heathrow, Manchester, Stansted and Edinburgh, causing delays of several hours as self-service passport gates stopped working due to a ‘systems failure’.

Travel industry experts have repeatedly warned the chaotic scenes seen in the wake of the country reopening are blighting the UK’s global reputation, while running the risk of a spike in Covid cases – further jeopardising the already crisis-hit tourism sector.

Tory MPs have demanded answers from the head of Border Force over the Heathrow queuing scandal seen in recent months but Paul Lincoln, the agency’s director general, has not commented publicly on the issue in recent weeks. 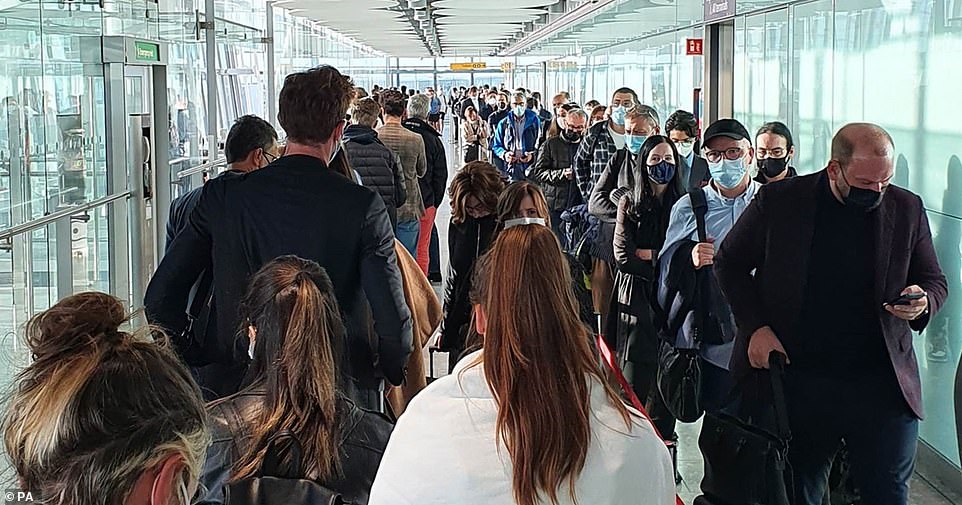 Passengers queue for the Arrival Hall at London Heathrow Airport’s Terminal 5, due to a problem with the self-service passport gates 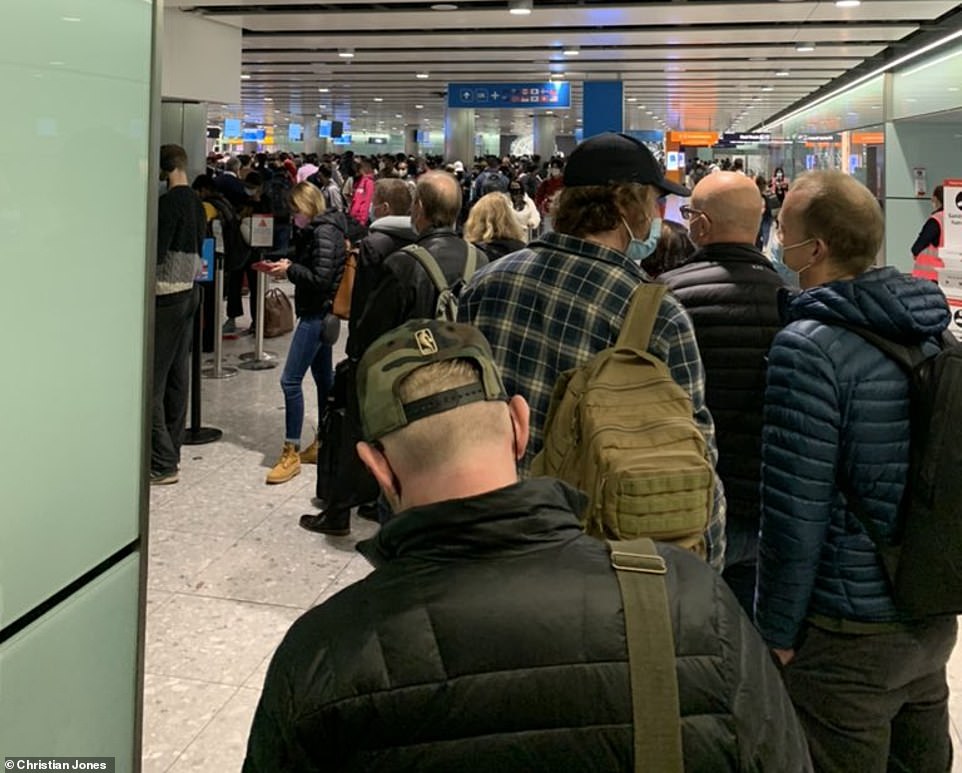 Passengers posted images of massive queues on Twitter this morning, with one traveller estimated than more than a thousand people waited at immigration while another reported an expected waiting time of anywhere between two and four hours 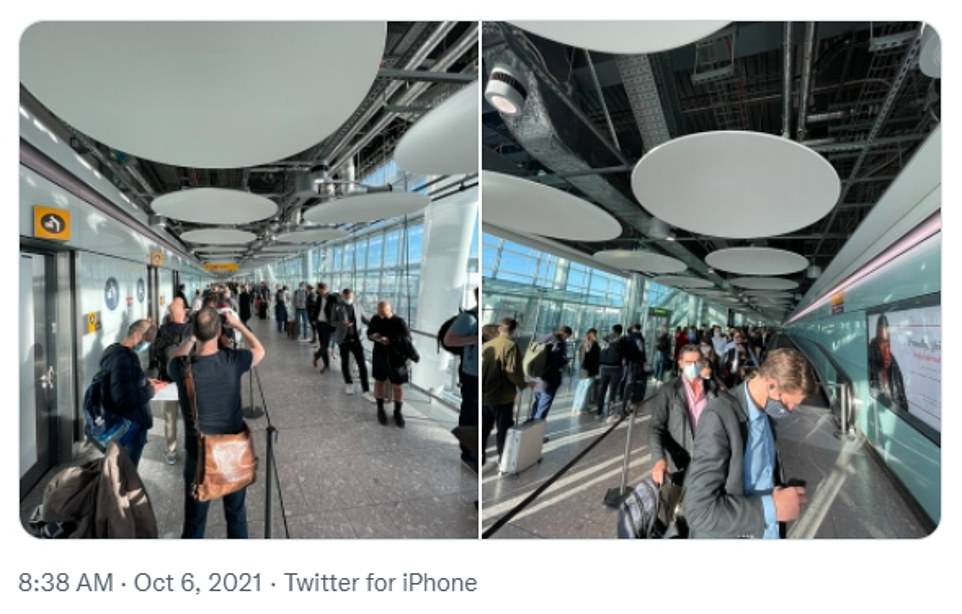 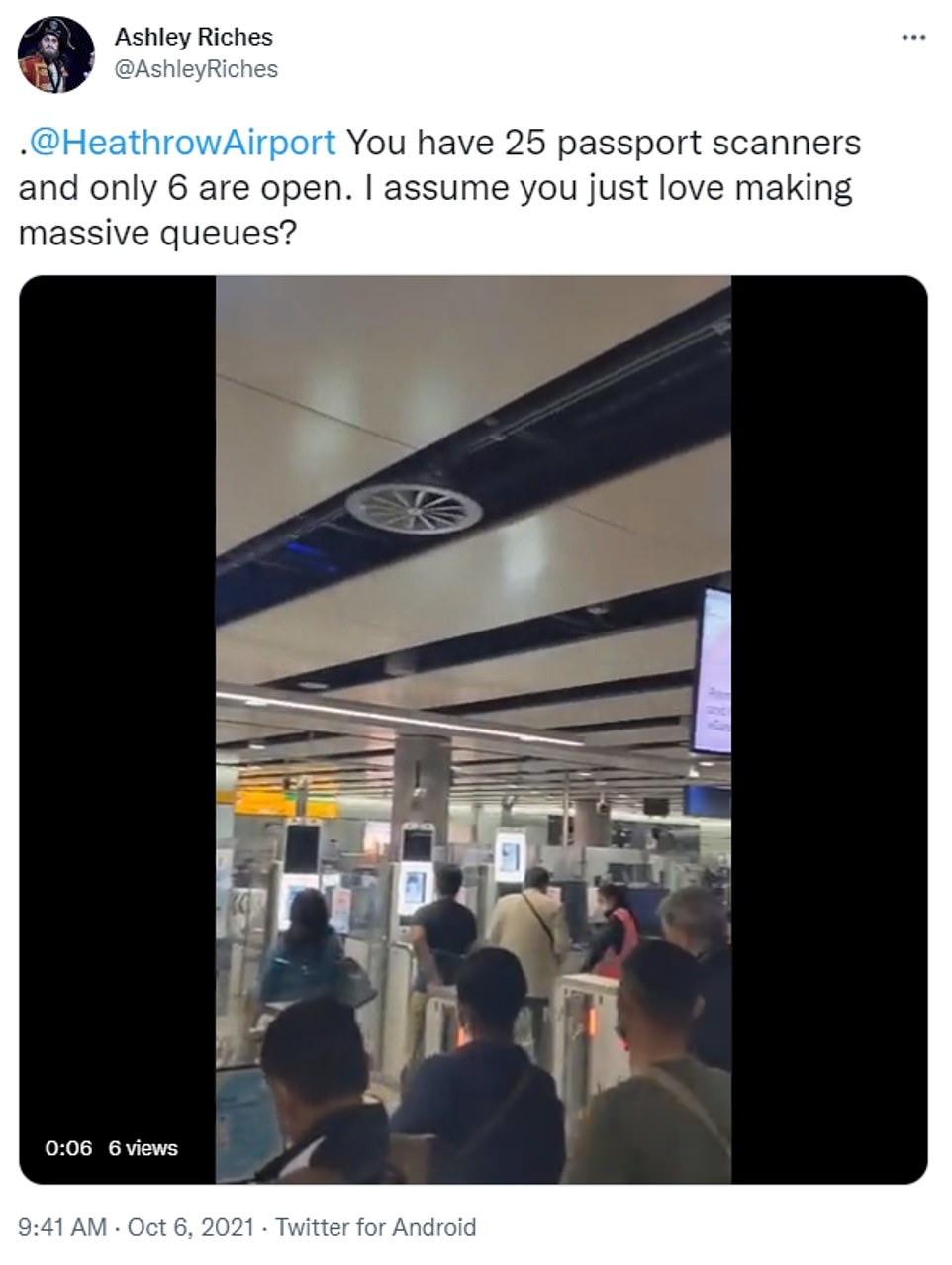 In a statement, a Heathrow spokesman said: ‘Earlier today, a systems failure impacted the e-gates, which are staffed and operated by Border Force’

Send your pictures to [email protected]

MailOnline revealed that the recent chaos at Britain’s borders has been driven by ‘nightmare’ changes to guards’ rotas which have forced them to work long shifts.

An IT failure at Heathrow last month caused further problems, with thousands of people forced to wait in queues of up to three hours.

A Border Force official suggested that the problems are at least partly caused by changes to the staff rota which saw shifts extended by two hours in August.

Officers had already had their shift lengths increased to 10 hours and 25 minutes but this was further extended to just over 12 hours, meaning that more staff have suffered from exhaustion and called in sick as a result.

The unnamed staff member told MailOnline: ‘The rotas are a nightmare. They made all officers extend their shifts by two hours. So an already long 10.25 hour shift became 12.25 hours.

‘Deputy director at Heathrow Raj Johal introduced these new rosters. They are highly unpopular amongst the staff, higher officers, senior officers and including the rostering and resource management department.’

He also claimed that more than 20 per cent of staff were off sick in August, whereas on a normal day the absence rate is around half that. The worker added: ‘It’s only going to get worse’.

The Immigration Services Union backed up the staff member’s claims, saying that a range of rostering issues during the Covid-19 pandemic has created ‘chaos for staff and caused widespread resentment’.

But a Home Office spokesman said: ‘It is inaccurate to say changes to Border Force staff rotas caused a spike in sickness in August.

‘The changes were only introduced on August 22, and were made following extensive consultation with staff and the trade unions, including the Immigration Service Union, to improve our operational efficiency and effectiveness.

Huge queues at Heathrow were first reported on May 17, when passengers flying into the UK faced ‘bedlam’ at passport gates.

In July, passengers said they had ‘never seen anything like’ the queues at Heathrow Terminal 5 as officials blamed the scenes on staff having to self-isolate. Similar scenes in August were also blamed on staff shortages caused by Covid-19.

Further pictures and video from last month showed long snaking lines of travellers packed closely together with no social distancing.

One holidaymaker told how he saw a pregnant woman pass out after a queue only ‘moved about five feet’ in the space of around 45 minutes.

Disgruntled passengers took to social media to share their frustration with one claiming queues for immigration checks were ‘one kilometer’ long and others slamming the ‘absolute farce.’