A celebration of the humble hot chip, a family-friendly pasta feast and a celebrity chefs’ signature series will be among the highlights of the Melbourne Food and Wine Festival’s first winter edition, set to debut next month.

Based at the Queen Victoria Market, the festival will bring more than 13,000 people into the city over 10 days, representing a much-needed boost to Melbourne’s battered restaurant and bar scene. 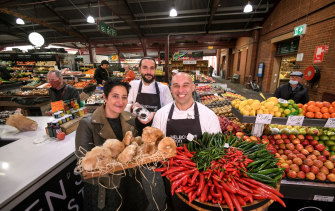 Research commissioned by the City of Melbourne and released on Monday showed it will take four years for the CBD’s economy to recover to pre-pandemic levels.

That analysis by Deloitte Access Economics was completed in May and did not account for Victoria’s circuit-breaker lockdown in June or the present NSW outbreak, which on Sunday prompted the Victorian government to close the border to all of NSW and the ACT.

Chef Shane Delia said the winter edition of the festival, which will run August 20-29, would help reinvigorate the city’s centre.

“It’s imperative that people get back into CBD,” he said.

“I mean, we’ve got some amazing things happening in regional Victoria, but the city is the lifeblood of what makes the city so special. There’s some brilliant restaurants that need people back in them, both [for] dinner but especially at lunch as well. We need our venues to be filled with people enjoying themselves.”

This year’s Food and Wine Festival is running throughout the year, with the inaugural World’s Longest Brunch running in March and a regional edition to run later this year.

The winter edition will feature 150 events over 10 days, including “an epic showcase of the power of hot chips” (Maximum Chips) and a rock’n’roll celebration of plant-based eating and drinking (Welcome to the Jungle).

“The festival has played a central part in telling the stories of why Melbourne is a world-class food and wine destination, and in what has been a challenging time for Melburnians we couldn’t think of a better time to bring everyone together, to bring Melbourne’s best chefs, cafes, restaurants, bars and pubs together for this wonderful festival celebration,” she said.

Tourism, Sports and Major Events Minister Martin Pakula said the festival was “enormously exciting for the CBD and for Melbourne more generally because it combines so many of the elements that make our city great. It’s about bringing people in, it’s about supporting businesses, but it’s also about giving people an opportunity to eat, drink and spend time with friends and family.”