Furious Scots have blasted tourists visiting the country’s version of Route 66 as huge campervans hog streets and owners defecate ‘on the side of the road’.

Locals slammed visitors for ruining the scenic 516-mile route from Inverness to the Kyle of Lochalsh while they are on staycation.

They claimed travellers are ‘clogging up the road’ while others take part in ‘outdoor toileting’ in unofficial places.

One female camper appeared to have been caught short and fouled in a bin on a site in Sutherland.

The woman hovered over the rubbish as she left her deposit – despite public toilets being just 500m away. 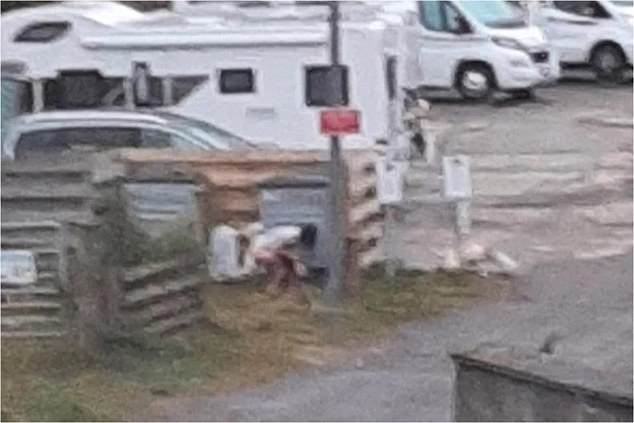 Locals slammed visitors for ruining the scenic 516-mile route from Inverness to the Kyle of Lochalsh while they are on staycation. Pictured: One female camper appeared to have been caught short and fouled in a bin on a site in Sutherland 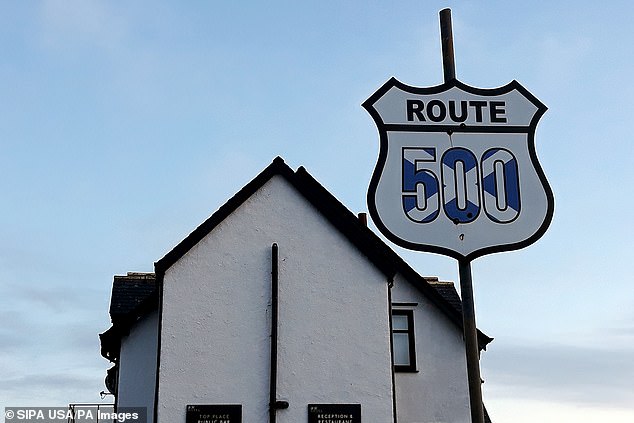 The North Coast 500 goes around the north coast of Scotland, starting and ending at Inverness Castle.

The route is also known as the NC500 and was launched in 2015, linking many features in the north Highlands of Scotland in one touring route.

But livid locals have had enough and blasted visitors for making their life a misery, with huge traffic jams and reports of people going to the loo in public places.

Writer and blogger Gale Brown said she was worried about the tourism boom in the area. 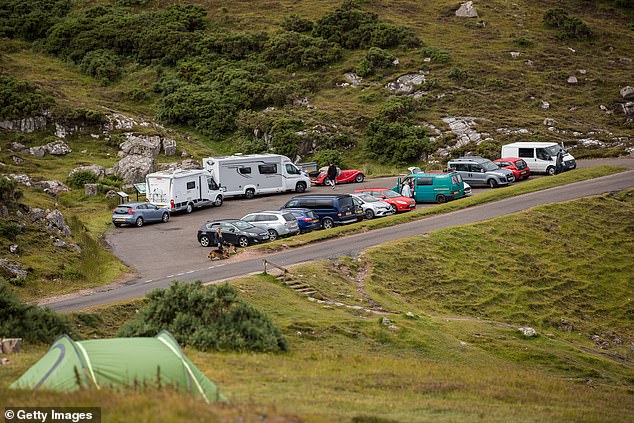 The North Coast 500 goes around the north coast of Scotland, starting and ending at Inverness Castle

She told Today: ‘I absolutely understand why people want to come and do the route. It’s a beautiful area.

‘I think one of the issues that we’re feeling locally is that there has been a lot of promotion of the route but that hasn’t really been backed up with infrastructure.

‘So things like toilets and and bins and so on. There has been a bit of an inappropriate disposal of motor home waste, camp fire remains, there’s been human waste left around sometimes, outdoor toileting…’

A man, who did not want to be named, added: ‘Horrendous. The amount of campervans, the amount of traffic… I think it’s clogged up too much.’

Meanwhile Geoff, who has run a chip van in John O’Groats for 15 years, welcomed visitors.

He told the Today programme: ‘It’s become like one of those things you put on a bucket list.

‘I think NC500 has brought extra tourism to places that haven’t expected the boom that it has brought.’

Earlier this month the woman in Kinlochbervie, Sutherland, was pictured going to the toilet on a bin.

Locals watched on in horror as she continued the act despite being 500m away from the loo.

Margaret Meek, 70, told the Sun: ‘It’s not the first time. The community has a small campsite with campervans and five service pitches, it’s been there since 2016.

‘These people came and parked up at the pier and decided to poo and pee. There are toilets 500m from where they were doing their business – and 2ft away there are signs.

‘It’s the final straw. It’s been observed more than a few times. In the last couple of weeks, six people were seen coming off a yacht up onto the pier and doing their business.

‘And not too far away from here a group of motorcyclists camped a couple of weeks ago when they left next to their campsite was their poo and toilet paper.’

She added: ‘This is where people take their children to the water and it’s really near to the shop.’

Despite the mixed reactions to the forming of the route, travel experts have hailed it as positive for Scottish tourism. 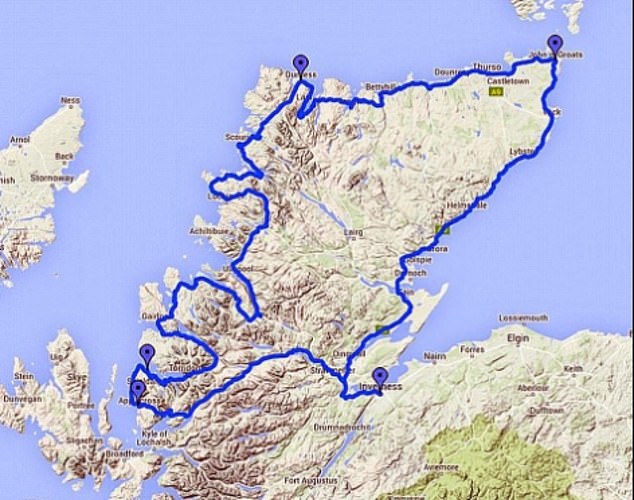 Despite the mixed reactions to the forming of the route, travel experts have hailed it as positive for Scottish tourism

Travel magazine previously said: ‘When it comes to the crucial ”stop-and-get-out-scenery-per-‘kilometre’ ratio, Scotland’s circuitous route of its Highland coastline proves you don’t need a pricey trip to the States to get your road trip fix.

‘Go in spring for sparkling lochs, valleys puff-balled with blossom, and views of the mineral-blue sea lapping spotless, strawberry-blonde beaches.’

It added: ‘Cosy B&Bs line the route, such as the converted Auld Post Office, set among rolling farmland in Caithness near John O’Groats.’

The stunning tourist route has had a positive impact on visitor numbers and business trade, according to a report commissioned by Highlands and Islands Enterprise.

The study, carried out by the Glasgow University’s Training and Employment Research Unit, estimates the route attracts around 29,000 additional visitors and £9million more in spending in its first year.

The research drew upon various data, including figures from tourism information centres along the NC500 that showed an average 26 per cent increase in visitor numbers since it opened.

This compares with a six per cent average increase across Highland.

The stunning route runs from Inverness, to the Kyle of Lochalsh on the West Coast, via the rugged north coast to John O’Groats, before heading down the east coast, completing the loop in Inverness.

Unmissable sights along the road include mountain ranges, Ben Hope and Suilven, the fairytale grand castle, Dunrobin, the Ardvreck castle ruins and the breathtaking Achmelvich and Dornoch beaches.

The route can be completed in a long weekend, or over several weeks on a more leisurely schedule and can be explored as a loop or in part.

The NC500 has previously been hailed as one of the greatest drives in the world by CNN and top travel magazines.

A fifth of the route is on single track roads and there have been particular motoring issues at places like Durness in Sutherland and Applecross in Wester Ross.