HONG KONG (Reuters) – Hong Kong police and protesters clashed in cat-and-mouse encounters across the city on Sunday, marking a shift in tactics during a tenth straight weekend of unrest in the former British colony where people are chafing at Chinese rule. 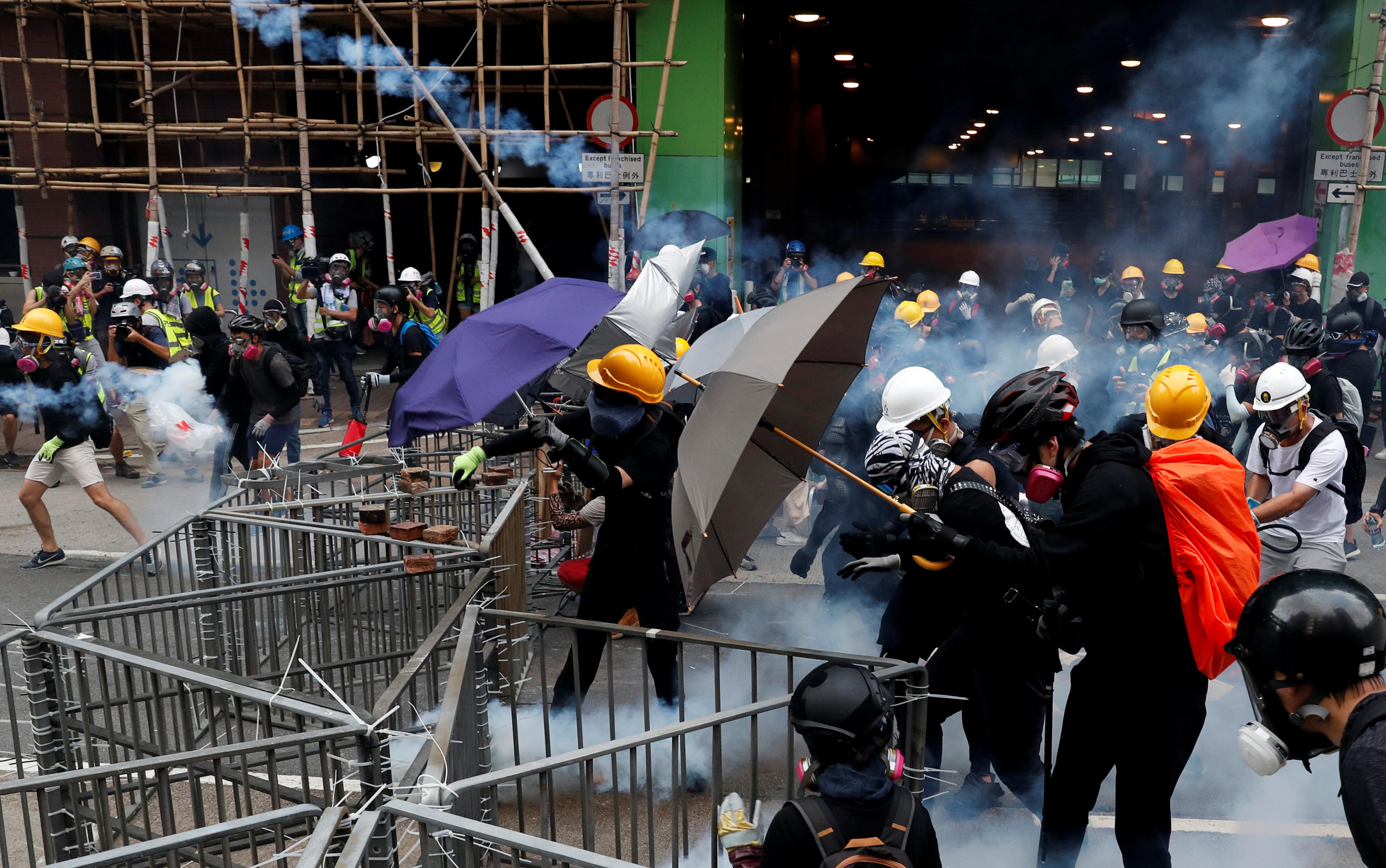 Seeking to clear streets quicker than before, police fired tear gas and charged with batons at flashpoints downtown and in working class districts.

Demonstrators, who at one point lobbed two petrol bombs, retaliated with a flash-mob strategy: withdrawing when pressed, only to re-appear elsewhere.

The increasingly violent protests since June have plunged the Asian financial hub into its most serious crisis in decades and are one of the biggest popular challenges to Chinese leader Xi Jinping since he came to power in 2012.

Despite the intense police response and a toughening stance from China, the movement that began two months ago in opposition to a bill allowing extradition to the mainland still seems to enjoy broad support in the city of more than 7 million people.

“We’ve been running all day but we’re not tired,” said Ah Sing, a protester in his 30s, wearing a black vest and surgical mask while he rushed from one protest to another.

“This is our response to Carrie Lam,” he added, referring to the city’s Beijing-backed leader. “If she doesn’t listen to the people and respond to our reasonable demands, we’re going to continue to spread protests across Hong Kong.”

Demonstrators say they are fighting against the erosion of the “one country, two systems” arrangement enshrining some autonomy for Hong Kong when China took it back in 1997.

“Independence for Hong Kong is not viable in the near term,” acknowledged protester Sam, 23, a barrister, while music pumped from cabaret lounges in Wan Chai’s bar district behind him, “But we have to fight for our freedoms and democracy.”

Tear gas was also used against protesters in several places in Kowloon, the main built-up area on the mainland side of Hong Kong harbor. Demonstrators avoided heading to North Point, where local pro-Beijing groups had mobilized supporters.

Authorities have begun emphasizing the damage on the city’s economy, already buffeted by China’s slowdown and the U.S.-China trade war. They are also applying pressure on big companies like Cathay Pacific Airways (0293.HK), which has been told to suspend staff engaged in illegal protests.

Police have arrested more than 600 people.

Yet activists’ demands have grown to include greater democracy and Lam’s resignation. They marched on Sunday despite an official ban, with confrontations coming at nightfall.

Chants of “Liberate Hong Kong” echoed through the working class area of Sham Shui Po when more than a thousand black-shirted protesters marched. Some residents cheered, while drivers honked horns or gave a thumbs-up.

“We have lived in Hong Kong all our lives and this is the hardest time because the government is not listening to the citizens,” said a 63-year-old man surnamed Leung, who joined a protest with his 93-year-old father in a wheelchair.

Hong Kong’s government says the protests are pushing the city to an extremely dangerous edge.

“I fear the government’s flat rejections of this is just one more missed opportunity to try to cool things down a bit,” pro-democracy lawmaker Fernando Cheung told Reuters after a daytime rally near the financial center’s business district.

Young people have been at the forefront of the activism.

They have dominated a peaceful sit-in at the city’s international airport which entered its third day on Sunday, with about a thousand demonstrators singing songs and handing out flyers to arriving travelers amid a carnival atmosphere. 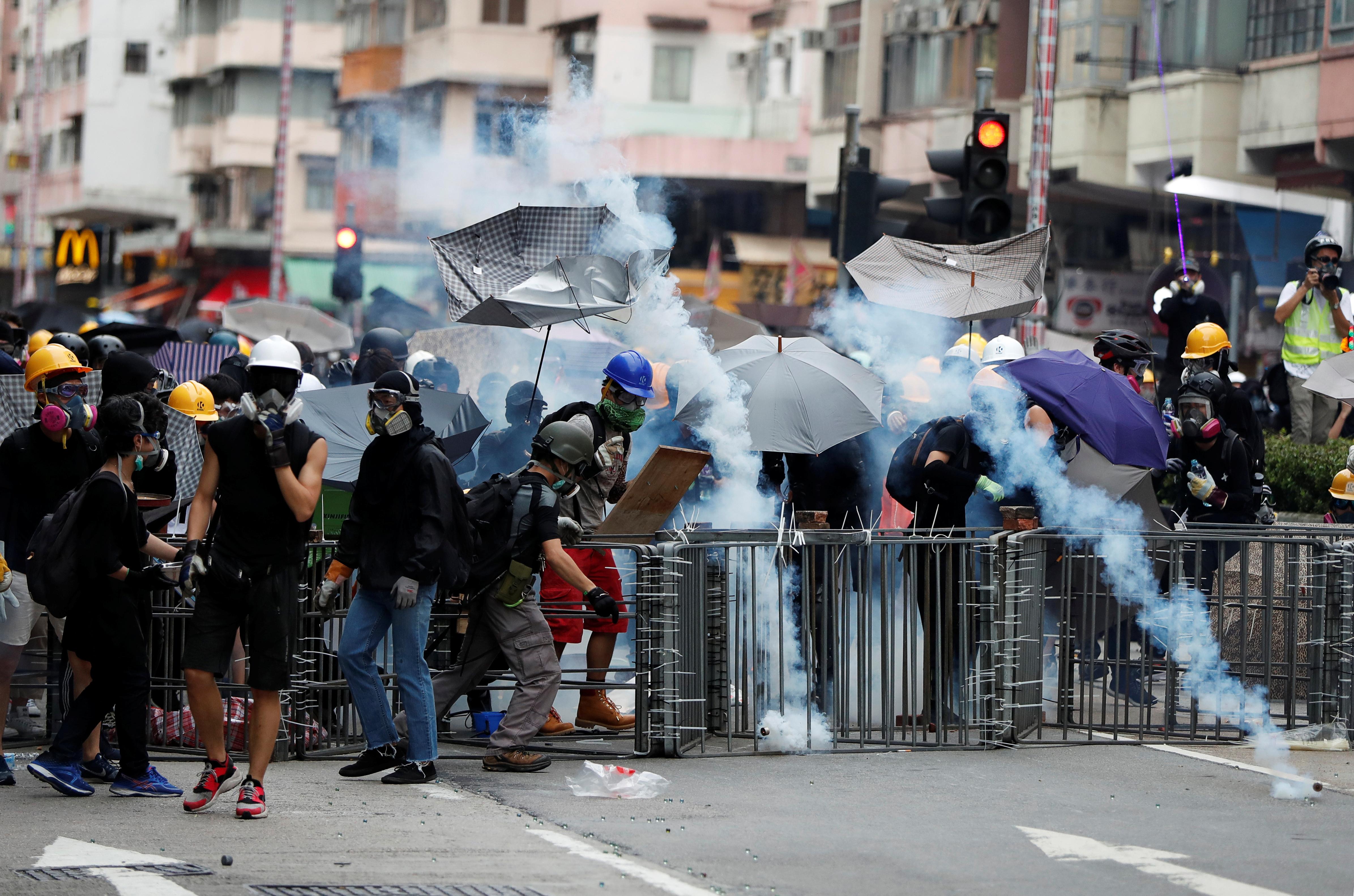 “I am concerned about my future, about Hong Kong’s future, we all are,” said Victor, a 27-year-old art tutor, his face slick with tears from tear-gas smoke near Wan Chai.

“We want to avoid China completely taking over. If we protesters leave, they will take over immediately.”