Nigel hopped, skipped and jumped in the Mall after a good night’s sleep: HENRY DEEDES sees the Brexit Party leader relish his time at the top

Nigel Farage hopped, skipped and jumped his way into a smart, stucco-fronted townhouse off London’s Pall Mall yesterday to greet his victorious MEPs. The man who’s making a habit of single-handedly changing the UK’s political weather was a twisting tornado of energy.

There were hugs, handshakes, even a smackeroo for his party’s conquering queen Ann Widdecombe. It was like watching Leslie Crowther bounding on to the set of The Price Is Right. C’mon down!

Farage’s excitement was understandable. Barely six weeks after it was formed, his Brexit Party had won the biggest share of the vote. Incidentally, the canny former City trader also won himself £1,000 after betting that his mob would top the polls.

Had he managed to get any sleep? Oh yes, his long-serving bagman Gawain Towler assured me. He got a few hours in between the last key count being declared at 1am and his first interview at 6am. ‘So, more than usual.’ 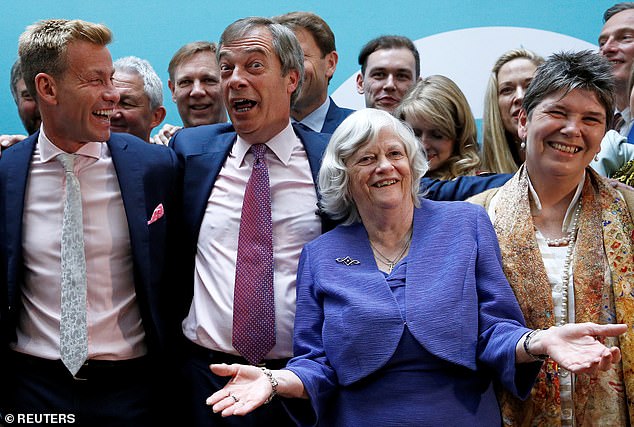 With excited, rabbit-in-the-headlights looks etched across their faces, they could have been an office syndicate who’d won a National Lottery jackpot and ticked the maximum publicity box.

They’re now all off to Brussels with an £80,000 salary and more perks than a sultan’s concubine. Except none of them want to be there, said Farage. They all had other lives and businesses to which they would much rather be attending.

Hmm. Just wait until they discover what the Strasbourg expenses are like.

The Brexit Party’s election success, Farage announced, was a wake-up call to the main political parties. He spoke repeatedly of a lack of ‘losers’ consent’ among Remainers, who portrayed him and his supporters as ‘racist Little Englanders.’

Someone asked what would happen to his party if the Conservatives delivered Brexit. Would that not make them obsolete? ‘If the Tories deliver Brexit! Did you hear that guys?’ Farage scoffed, turning incredulously toward his MEPs, who chuckled back in unison. ‘The Conservative party is bitterly divided, so it’s extremely unlikely that it will pick a leader who is able to take us out of the EU on October 31 come what may.’ 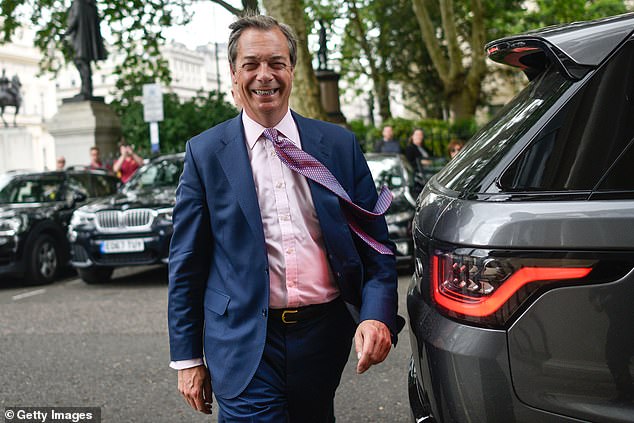 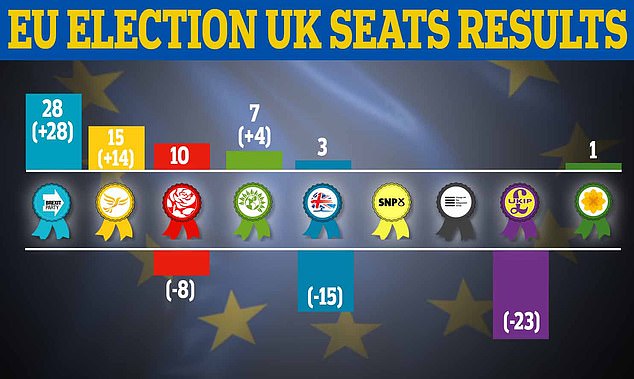 The Brexit Party won the most seats in the election last Thursday, followed by the Lib Dems

He also refused the idea of working with one of the hardline Brexiteer Tory leadership candidates such as Boris Johnson or Dominic Raab if they became PM. ‘Why would I trust any of them?’ he harrumphed.

The next goal is the Peterborough by-election next week. The Brexit Party would be doing its ‘damndest’ to win, Farage said, rocking back and forth on his heels, jabbing his head for emphasis.

Talk then turned to what else the party stood for apart from leaving the EU. ‘Ah, good question,’ growled Nige, that one-sided smirk creeping across his face. Political reform, obviously. As for the rest, he said he planned to consult with the party’s 110,000 members.

There was a suggestion from a Financial Times representative that the Brexit Party would split the Tory vote at a general election, ushering in a Corbyn government. 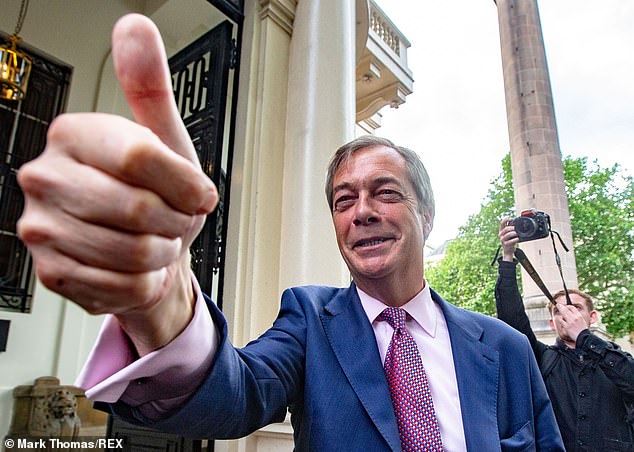 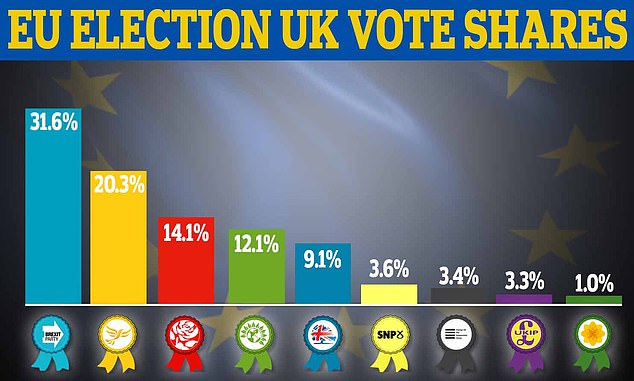 This chart shows the parties’ respective share of the vote, with Labour third and the Tories fifth 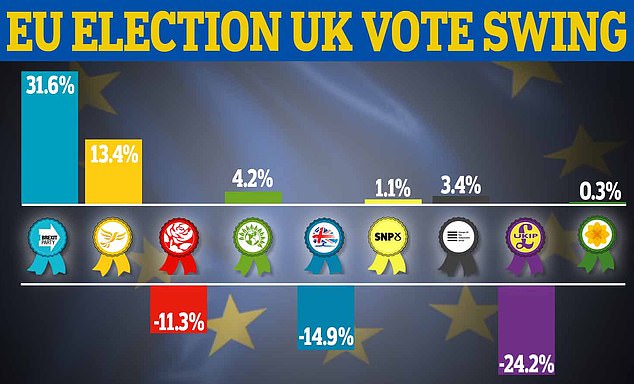 The Conservatives suffered a humiliating 14.9 per cent loss in their 2014 vote share in last night’s European election results

‘Noooo!’, said Farage. Labour are more doomed than the Conservatives. ‘Did you see Labour’s result in Wales?’ he asked, with a mocking shake of the head.

A fellow sketch-writer asked if anyone from Brussels had been in touch to congratulate him. ‘I had a missed call earlier this afternoon,’ Farage shot back, ‘which I suppose might have been from Jean-Claude Juncker after a long lunch.’

How those Eurocrats must be dreading this lot pitching up in Brussels.

After a quarter of an hour, Farage was getting restless. ‘Anything else? No, well that’s that!’ he clapped, followed by a sharp rub of the hands which suggested he had an overdue appointment with Mr Gordon’s and his associate Mr Schweppes that he intended to keep.

Outside, as we dispersed on to the pavement, the clement Bank Holiday weather was on the turn. Mayfair’s blue sky had faded and in the distance, dark clouds were gathering. Our political rainmaker was on manoeuvres again.