The moment a young girl mistook the rumblings of a magnitude-5.9 earthquake for a visit from her toy fairies has been captured on camera.

Sophia Comelli, 9, was playing with her Barbie dolls in her bedroom in Hepburn in regional Victoria on Wednesday when the quake struck about 9.15am.

As she was beside her iPad, she decided to start filming, but focussed in on her fairy playhouse, saying: “Fairies, if that’s you, you’re very loud.

“Fairies, if you’re in there, be a little bit quieter – I’m kind of scared.”

Sophia’s mother, Melanie Comelli, said her daughter came rushing to her when she was with her seven-year-old son. Sophia said something was going on with her fairy playhouse, and her whole room was vibrating.

“[Sophia] started filming when it started rattling because it was her fairy house that was banging up and down against the wall,” Ms Comelli said. 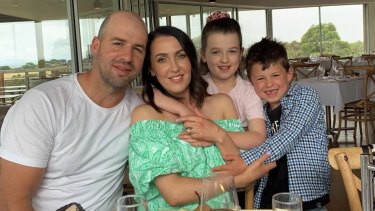 “She thought her fairies were getting something to give to her because she gets little gifts off her fairies every now and then when she has been a good girl.

“She does sound quite scared in the video because she said it was just surprising and shocking what was going on, and she said some toys fell off her little Barbie house.

“[We’ve] never felt anything like that around here, that’s for sure.”

Ms Comelli said when she explained to her children that what had happened was an earthquake, they were both surprised, but not too worried. They asked whether anyone could have been hurt and Ms Comelli said while it felt strong, it did not feel strong enough to cause serious damage.

“[Sophia] does sound quite concerned in the video but straight afterwards, once she’d realise what it was, then she was back giggling again, so it was all good,” Ms Comelli said.

Ms Comelli said she had watched her daughter’s video dozens of times, and decided to share it with her friends and family on social media.

“When she was talking to her little fairies, I thought that was very cute.”

“[All our friends and family have] been saying that [Sophia] was very brave and quick-thinking, to film it.

“She quite often likes to take little videos at home.”

The magnitude-5.9 earthquake hit a largely unpopulated area north-east of Melbourne, between Mansfield and Rawson. It was the largest tremor ever recorded in the state.