Hot weather has been absent throughout June for most in Britain, with sunny skies having been replaced with weather warnings, flood alerts and, at times, violent storms. While the UK’s luck could be about to change, it’ll have to get through more adverse weather first as the Met Office issued three yellow warnings for rain across parts of Scotland and Northern Ireland. The BBC has predicted potential highs of 30C hitting southern regions of England soon, with the weather forecaster predicting “between 20 and 30 percent” chance of this happening before July 13.

But a more accurate picture can be painted by looking forward through weather charts and maps.

According to WXCharts’ long-range weather chart looking at maximum temperature in the weeks coming, hot weather isn’t far off.

Monday, July 19, looks to be when the south of England will experience the hottest climate, with temperatures reaching the high 20Cs by the time the afternoon comes around.

London is expected to see temperatures each 25 to 26C, while the north will go one step further, with the likes of Manchester expecting 27C. 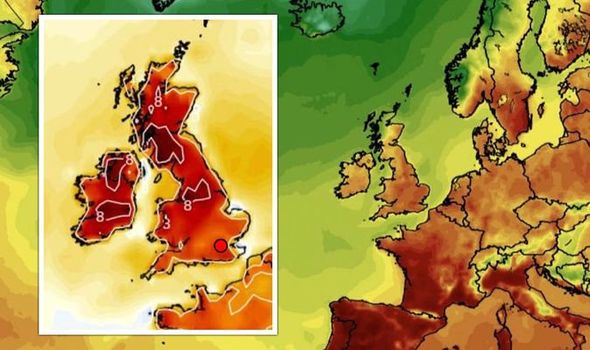 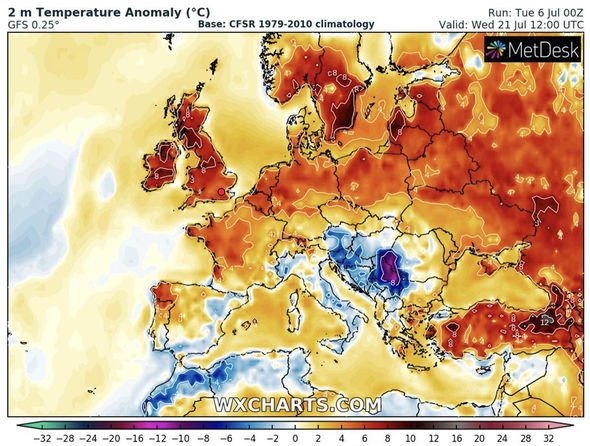 By the time Tuesday, July 20, comes around, things will be even better in terms of the heatwave.

Tuesday’s temperatures see the map turning orange, with consistent highs of 27C forecast around London and the Midlands.

Looking further to the south, more coastal areas will see cooler temperatures, with highs of 25C in the southeast of England.

During this same period of time, Scotland, the northeast and Northern Ireland will be slightly cooler but still catch some of the sunshine with temperatures between 18C and 24C expected. 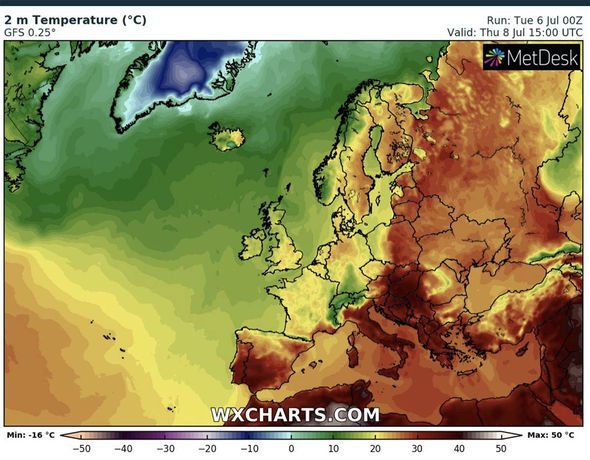 Going to Wednesday, July 21, temperatures will remain warm as the summer well and truly rolls in.

At this point, temperatures reach highs of 28C for London, the Midlands and central England.

As is understood, these areas get the most heat because of the fact they’re not near the coastline and so are shaded from any additional winds coming in.

Newcastle and the northeast will be slightly cooler during this time, according to the chart from WXCharts, with temperatures reaching the low 20Cs, and some areas nearer to the northeast coast could be as cold as 19C. 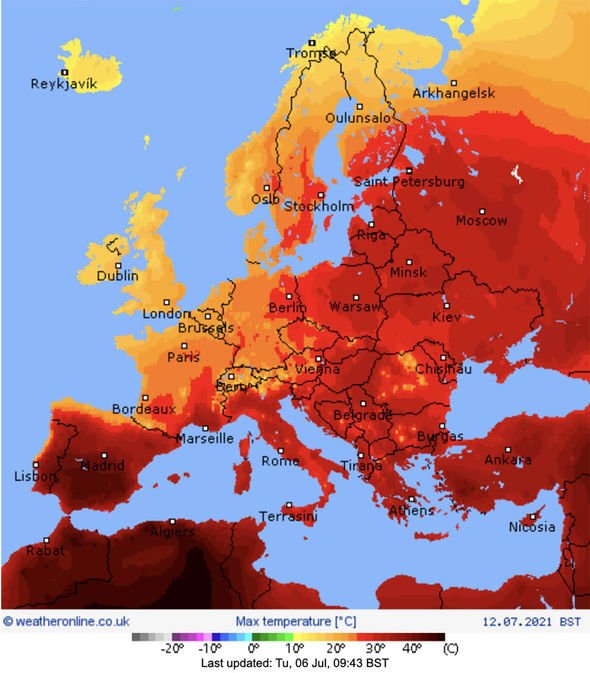 After this, temperatures are largely expected to even out, with things looking a bit cooler on Wednesday 22 and Thursday 23 July, when highs will be 24C in London and the southeast and 21C in the north and Scotland.

The Met Office’s long range forecast, which looks at the period Tuesday, July 20 to Tuesday, August 3, reiterates the fact temperatures will be on the up in July.

The forecast reads: “As is typical for the time of year, confidence is relatively low for this period, but fine and dry weather for most of the UK is most likely for the rest of July.

“There is, however, the possibility that occasional spells of rain may impact northwestern areas.

“There is a very low chance of thundery conditions developing at times, especially across the south.

“Temperatures are likely to be above average for much of this period, with an increased chance of some very warm spells occurring in the south.”

In terms of this week, it’s not going to be much better than it is now unfortunately.

The Met Office outlook for Thursday to Saturday reads: “A mixture of sunny spells and showers.

“Showers lighter and less widespread than on Wednesday, although turning heavier once again on Saturday. Rain will affect the south on Saturday.”