Federal investigators with the National Transportation Safety Board have released photos of the Boeing 737-200 cargo jet that made an emergency water landing off the Hawaiian island of Oahu.

Transair Flight 810 was found approximately two miles offshore from Ewa Beach, after a the pilot made a ditch landing in the Pacific Ocean. Both crew members were rescued from the water.

The major components of the airplane – the aft fuselage including both wings and tail along with both engines, and forward fuselage – were located on the sea floor at depths between 360 and 420 feet, the NTSB said in a statement on Friday.

The NTSB said the wreckage is too deep to deploy divers for recovery of the flight data and cockpit voice recorders. The investigative team is developing plans to recover the aircraft. 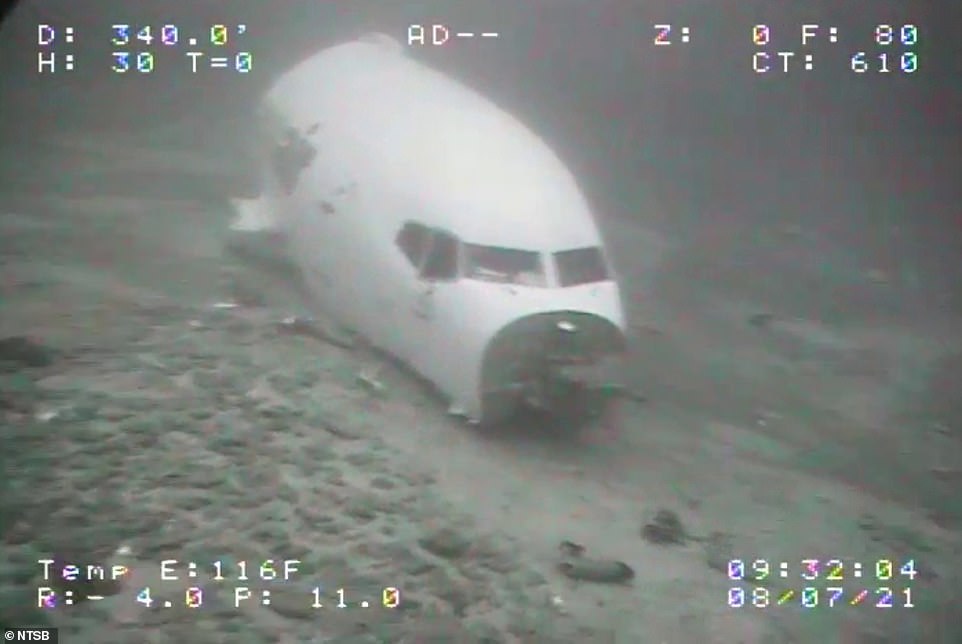 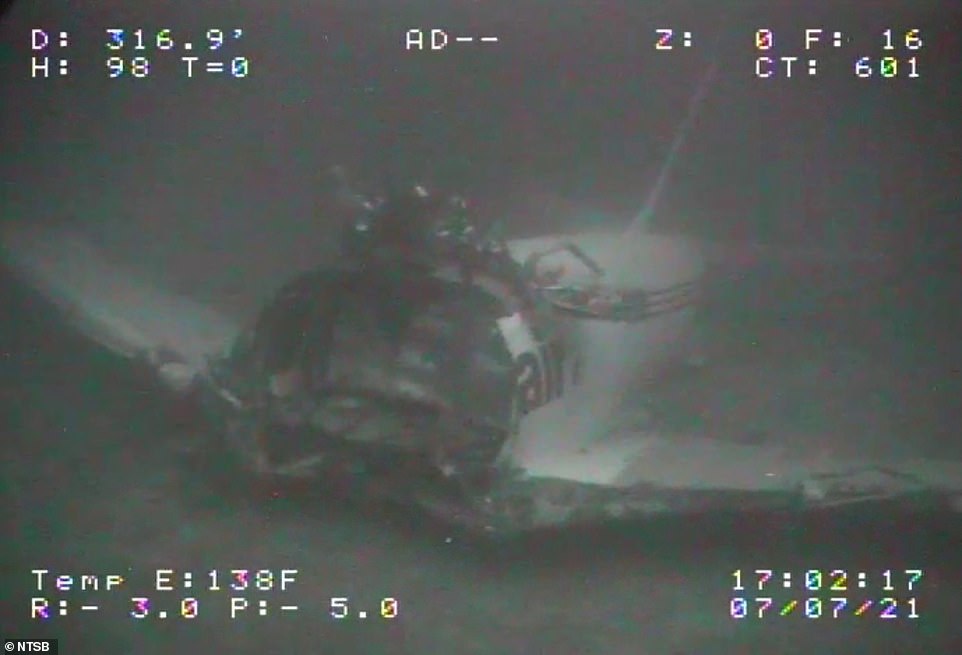 Transair Flight 810 was found approximately 2 miles offshore from Ewa Beach, after a the pilot made a ditch landing in the Pacific Ocean 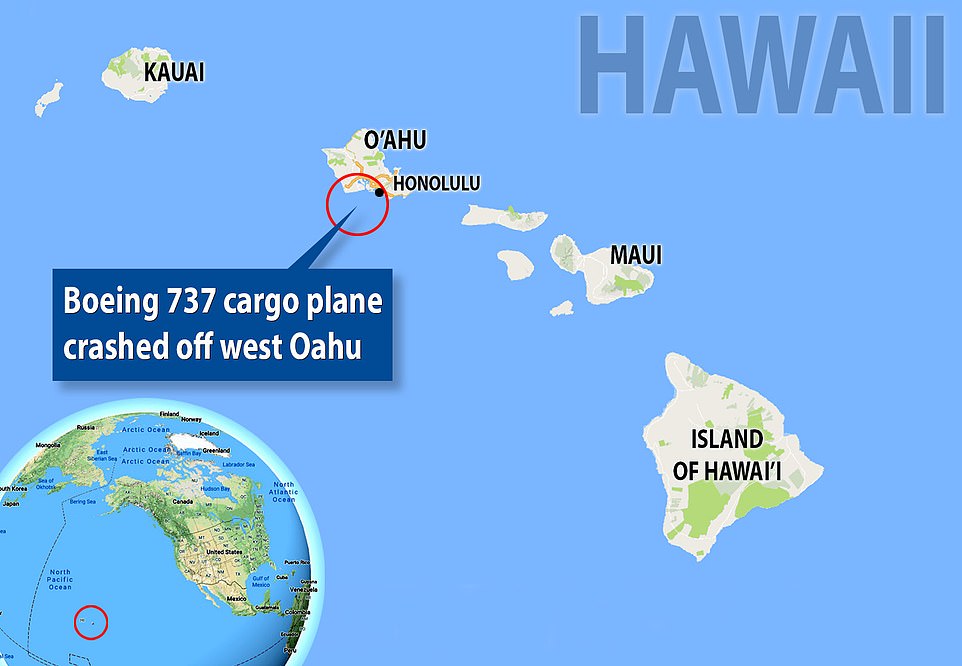 The plane took off from Daniel K. Inouye International Airport in Honolulu and was en route to the Hawaiian island of Maui

The plane components were located with a Side Scan Sonar and Remotely Operated Vehicle, the NTSB said.

The safety board said fuel samples from another airplane fueled on the same night were tested and no irregularities were found. The agency released photos of airplane components located on the ocean floor.

The two crew members on Transair Flight 810 were injured after being forced to land in the Pacific Ocean. One was taken to a hospital by helicopter and the other was rescued by boat.

The Boeing cargo plane was built in 1975.

The crew reported engine trouble and plans to turn back shortly after taking off at 1.33am local time from Daniel K. Inouye International Airport in Honolulu. The plane was en route to the Hawaiian island of Maui.

The NTSB said its investigators have completed more than a dozen interviews including the flight crew, other Transair personnel, and Federal Aviation Administration employees. 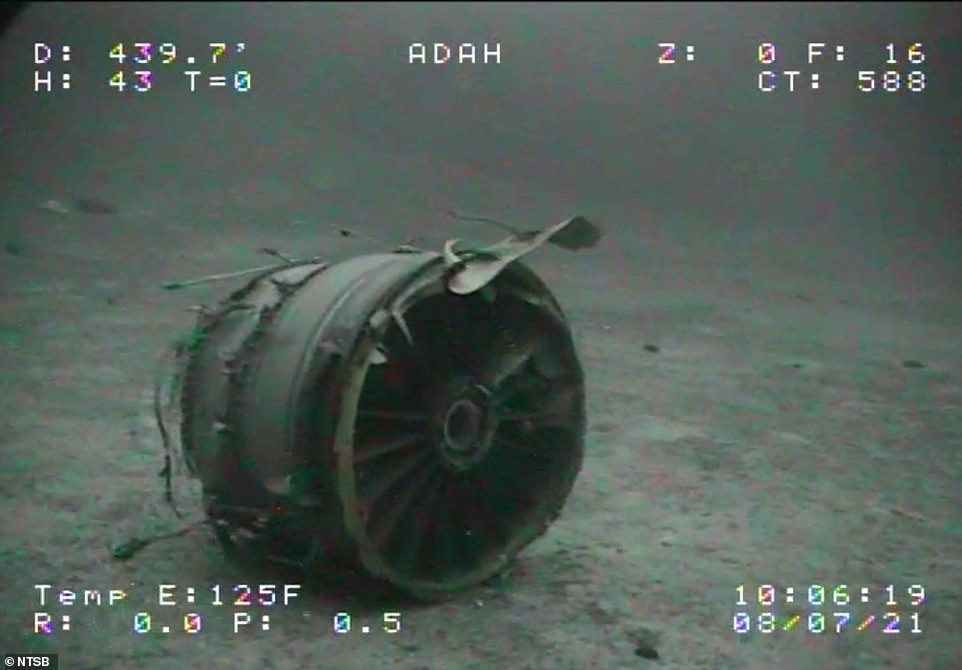 Earlier this week, the 50-year-old pilot who was critically hurt with a head injury and multiple lacerations in the crash was released from the hospital, as the cause of the incident remains a mystery.

The victim and his co-pilot were rescued by the United States Coast Guard off the coast of Hawaii, as they clutched packages and the tail of the Boeing 737 cargo plane to stay afloat.

The pilots reported that one engine was down. Initial reports suggested that there was not enough altitude to return to Honolulu, prompting the aircraft to ditch into the sea.

The plane was operated by Rhoades Aviation Inc, which does business as Transair. one of Hawaii’s largest air cargo carriers. It has been in business since 1982.

‘Rhoades 810, we’ve lost an engine. We’re on a 220 heading,’ one of the pilots told Honolulu air traffic control, giving the compass reading. 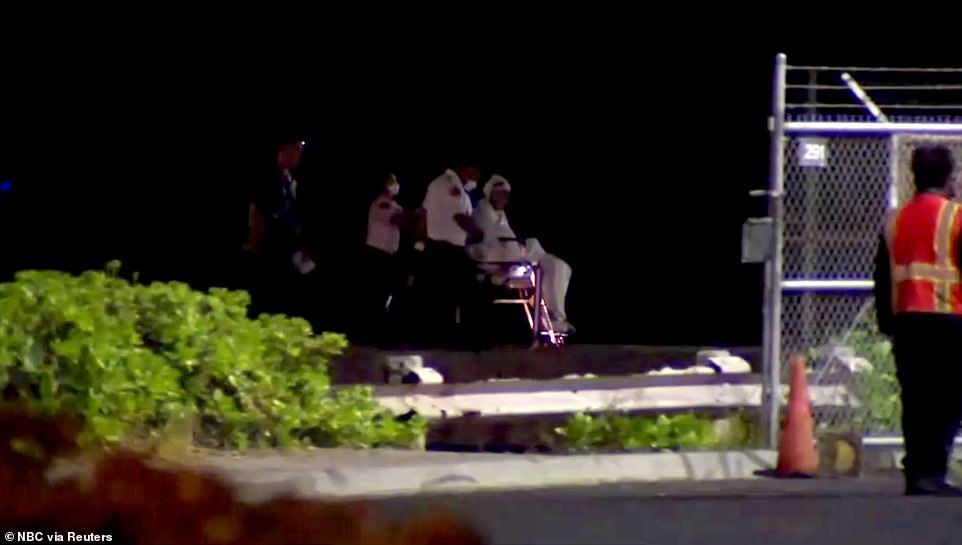 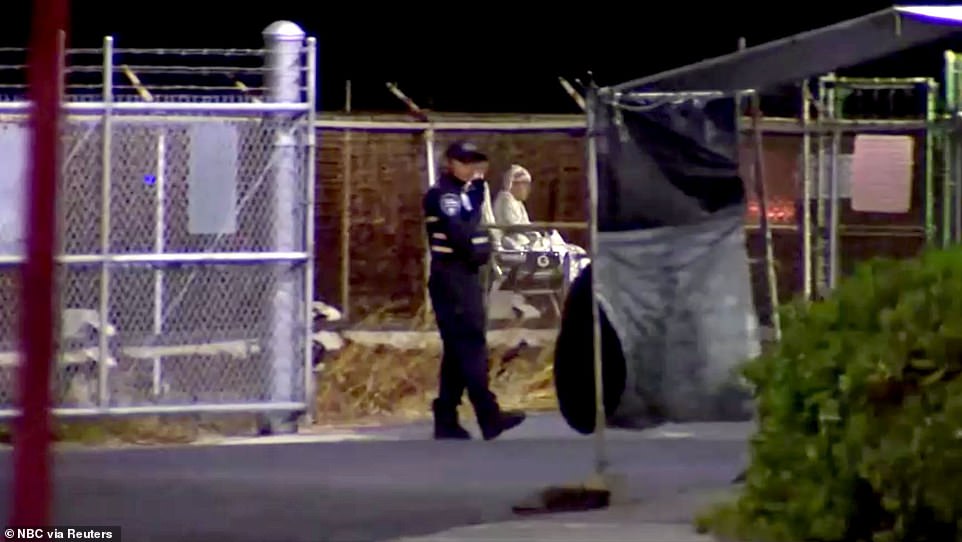 It’s been reported that a 50-year-old pilot suffered a head injury and was in a serious condition. It is unclear from the photo which of the pilots is pictured being pushed in a wheelchair

The recording was posted on LiveATC, an audio streaming site that broadcasts air traffic control communications.

‘It doesn’t look good here – you may want to let the Coast Guard know as well.’

They cited a problem with the second engine and attempted to return to Honolulu, the Federal Aviation Administration said.

At around 1.46am, the pilots reported losing their second engine and radioed that they were going down and being forced to land in the ocean. Flight tracking data stops at around 1:45, with a final recorded altitude of 75 feet. 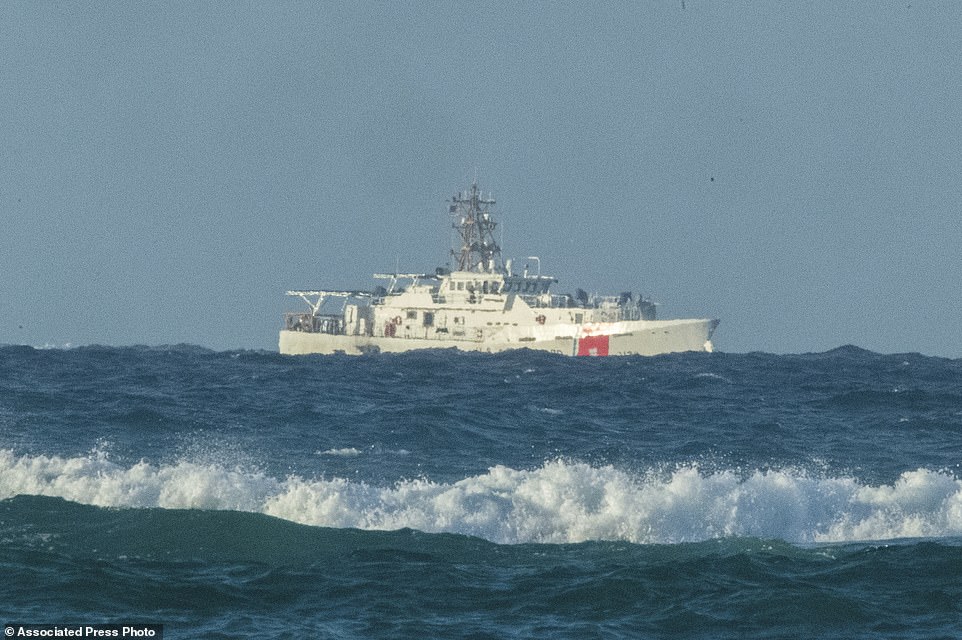 A U.S. Coast Guard cutter patrols the area of debris from the cargo plane that crashed off the coast of Oahu near Honolulu on Friday 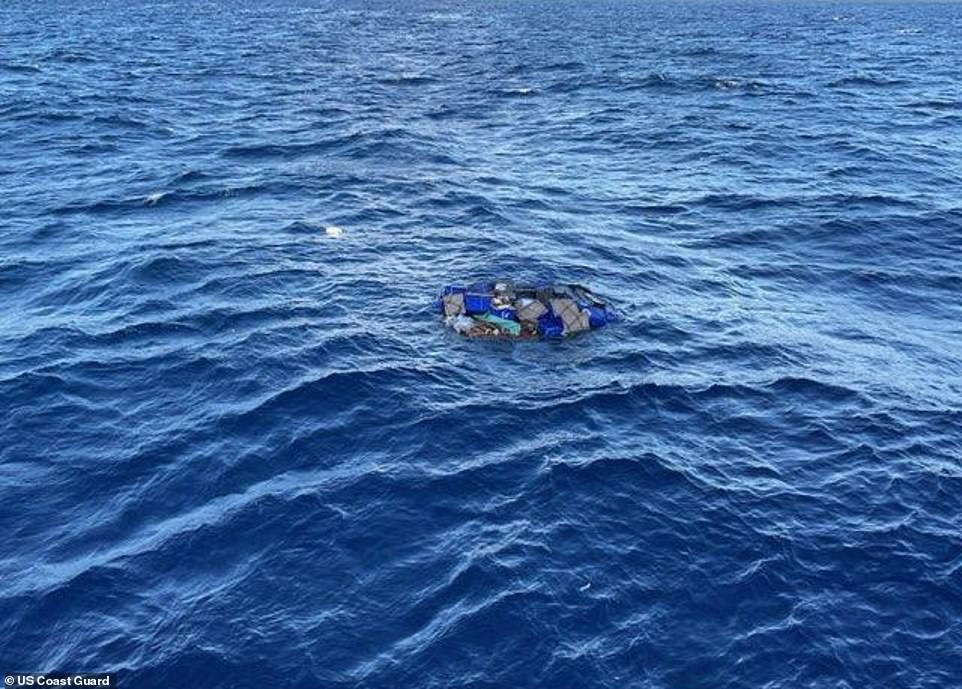 Some of the debris found floating from the sunken cargo plane

US Coast Guard Lt. Commander Karin Evelyn said in an email that they received a report around 1.40am of a downed inter-island transport plane.

About an hour later, rescuers in a Coast Guard helicopter spotted the debris field and two people in the water, Evelyn said. 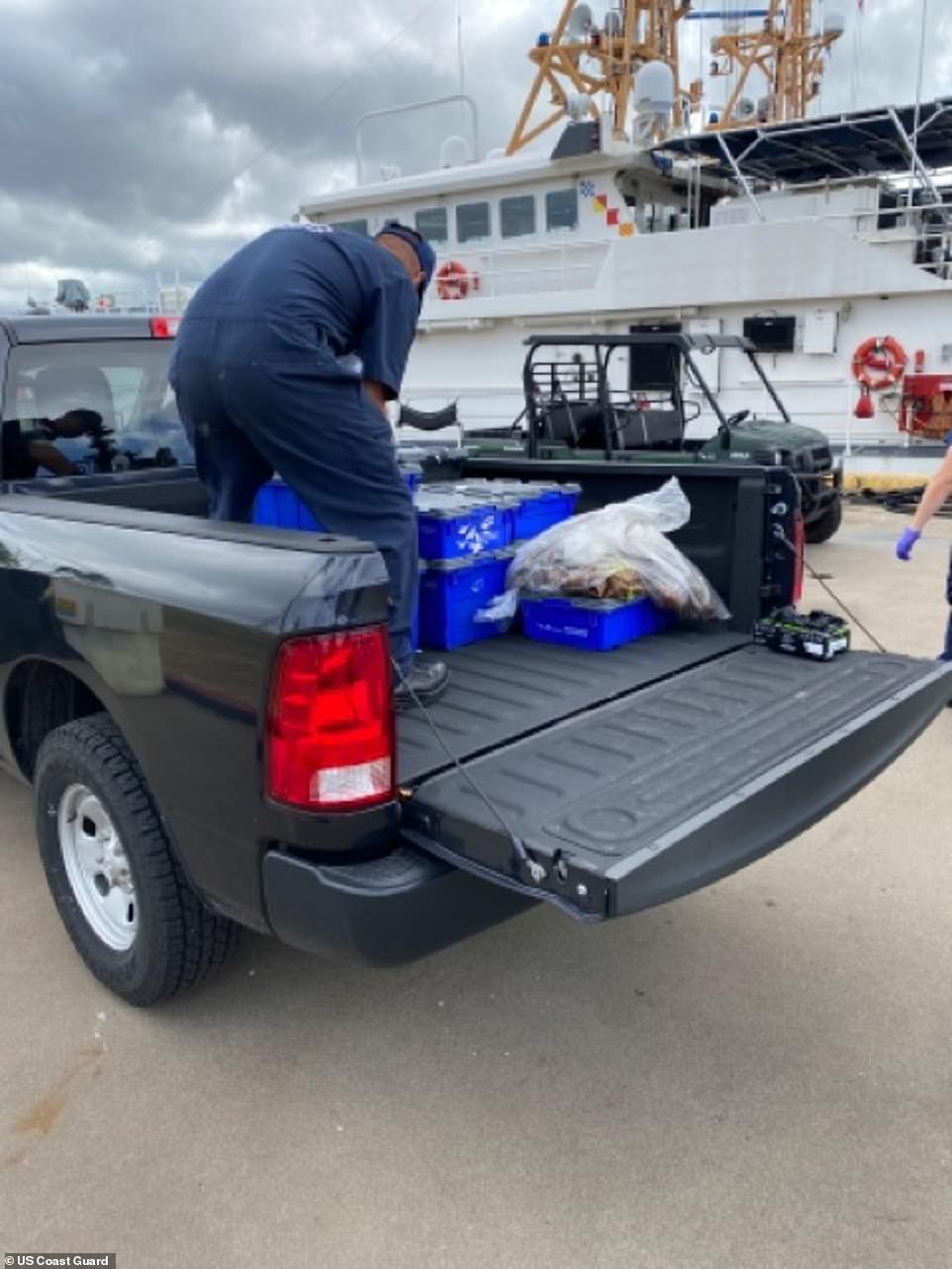 U.S. Coast Guard Cutter Joseph Gerczak arrived at the Coast Guard base in Honolulu with salvage he and others collected from the area where the plane sank 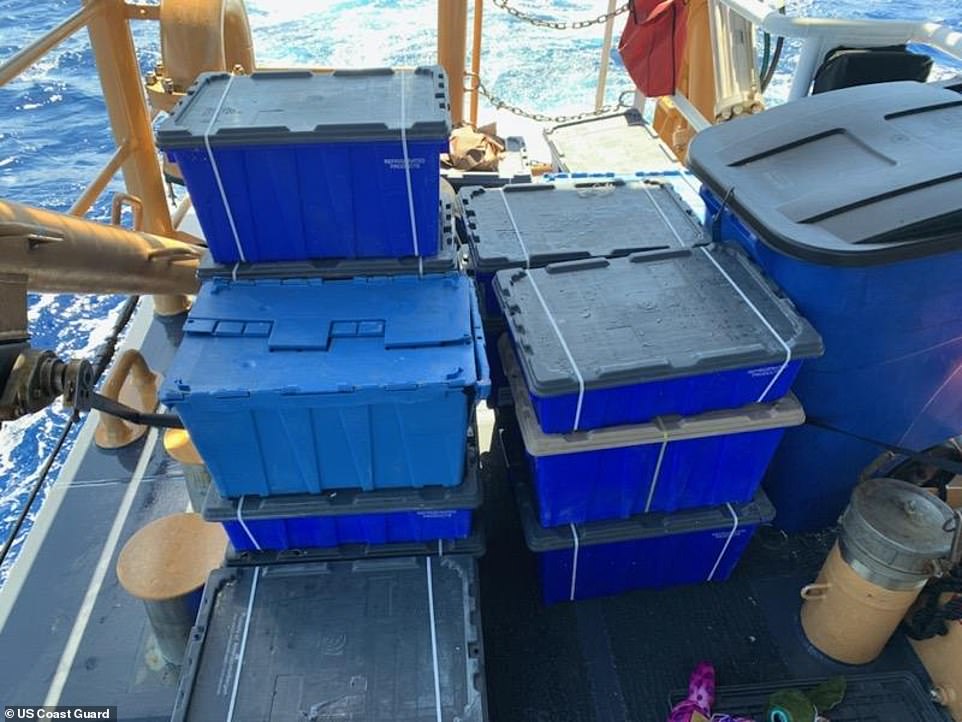 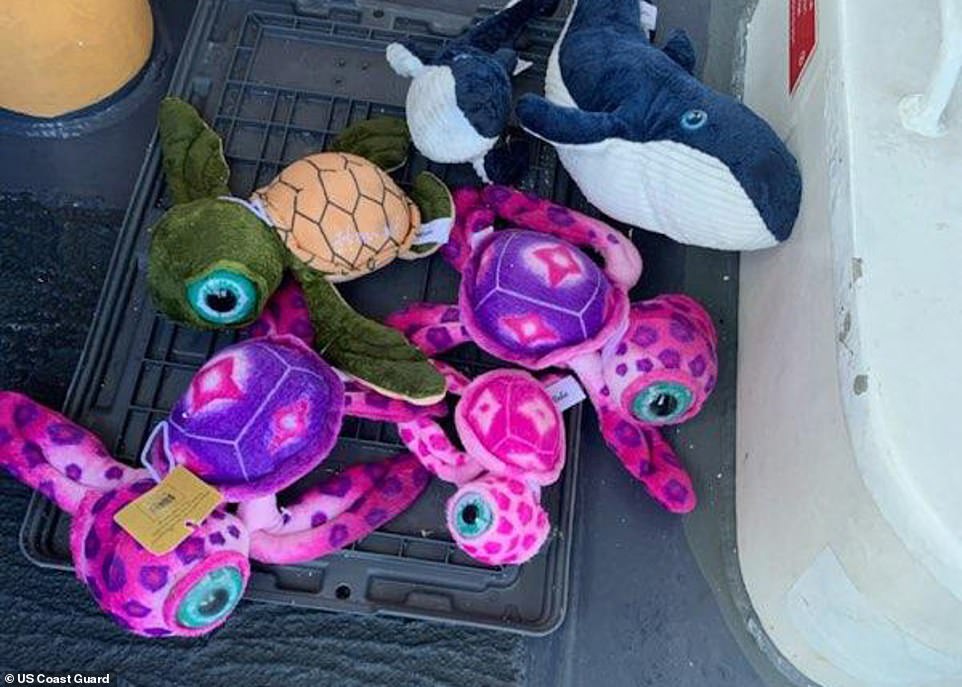 The loss of both engines in the 46-year-old plane – a workhorse of trans-Atlantic passenger travel with some of the busiest flight routes in the world – has raised worrying questions.

Engines do sometimes fail when hampered by a bird strike or volcanic ash, but it was unclear what caused these engines to malfunction.

Initial tracking data from RadarBox.com showed that the aircraft reached a maximum altitude of just 2,125 feet.

The aircraft’s descent path ‘looks reasonably slow and steady, suggesting that the pilots could glide the aircraft down to the ocean in a controlled manner,’ said SimpleFlying.com.