This is the heartbreaking moment a groom in China burst into tears reportedly after no one showed up at his nuptials due to coronavirus restrictions.

Footage widely circulated online shows the Chinese man weeping while being comforted by his bride, seemingly apologetic for failing to give his partner the wedding of her dreams.

The couple was forced to tie the knot without any families or friends present at the ceremony in northern Hebei Province which emerged to become one of China new coronavirus hotspots in recent weeks. 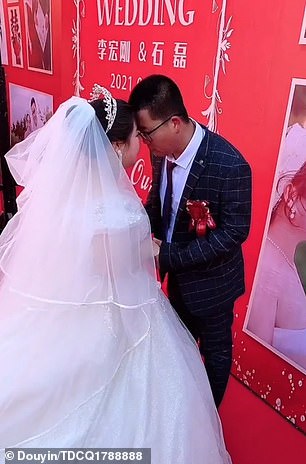 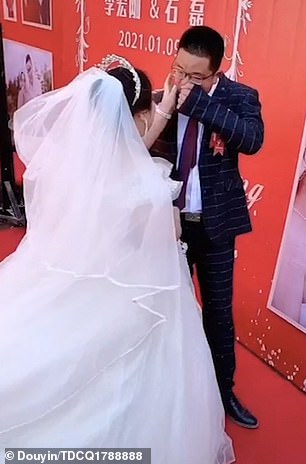 Footage widely circulated online shows the Chinese man weeping while being comforted by his bride, seemingly apologetic for failing to give his partner the wedding of her dreams

The saddening scene was reportedly captured on January 9 in Hebei near Beijing, a province that has been battling a wave of COVID-19 infections from the beginning of January by imposing travel restrictions and mass-testing.

Since January 8, three Hebei cities, including its provincial capital of Shijiazhuang with 11million residents, have been sealed off, with no one allowed to leave their homes unless absolutely necessary.

The city is also building a massive quarantine camp designed to hold thousands of suspected virus carriers to combat the outbreak.

The new outbreaks ravaging across China’s northeast have interrupted the life of tens of millions, including this couple who was set to get married.

According to media reports, none of their families nor friends could attend the wedding and witness the lovers’ special moment due to the travel restrictions. 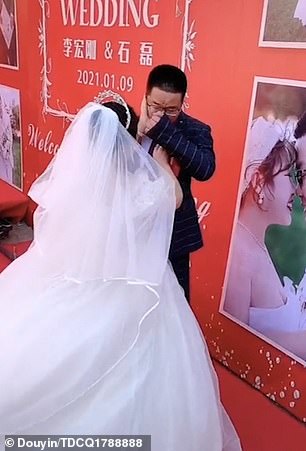 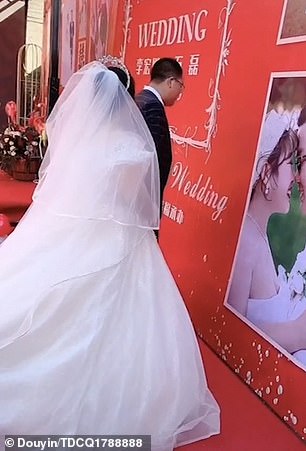 According to media reports, none of their families nor friends could attend the wedding and witness the lovers’ special moment due to the travel restrictions. Pictured, Mr Li and Ms Shi stand on the beautifully decorated ceremony stage as they tied the knot without guests 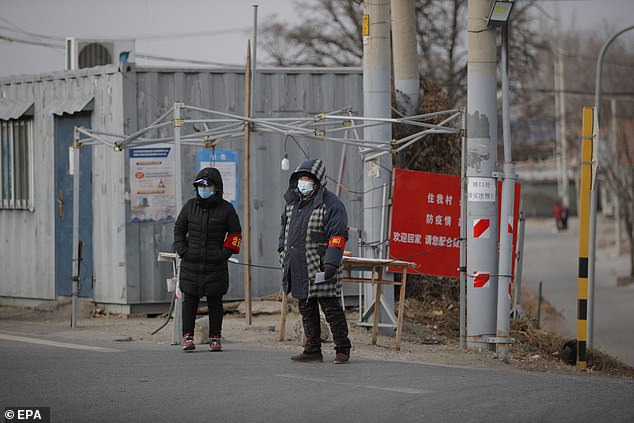 The couple’s story comes as China is bracing a wave of coronavirus outbreaks across its frigid northeast. Pictured, villagers work as security guards at a checkpoint on the outskirts of Beijing near Hebei Province on January 13 following the country’s new virus outbreak

In the trending footage, Mr Li and Ms Shi are seen standing on the beautifully decorated ceremony stage as they pressed their foreheads together.

The groom suddenly broke down in tears as he felt guilty for not giving his bride the perfect nuptials.

While trying to compose himself, the man was comforted by his partner who gently wiped his tears away as she held his arms, seemingly showing her support and understanding.

Although the couple spent their wedding without guests, the newly-weds have since received a flood of congratulating messages from netizens after the short clip became trending on Chinese social media.

One comment wrote: ‘Even though your families and friends were not present, we are all sending our wishes to you. Wishing you a lifelong marriage and a beautiful family!’

Another user said: ‘The whole country is congratulating you guys. Please always be happy!’ 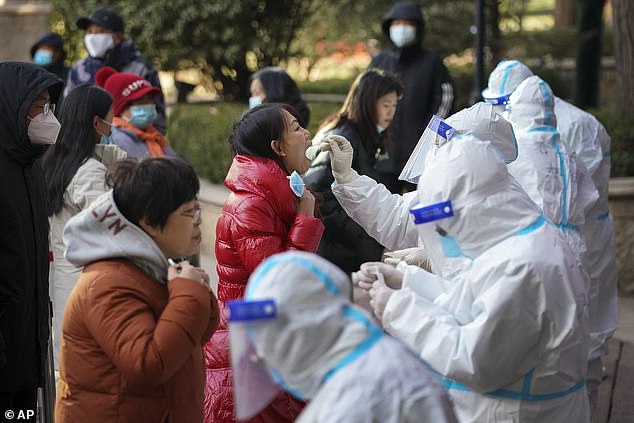 Since the beginning of January, Hebei has been battling a wave of COVID-19 infections by imposing travel restrictions and mass-testing. Medical workers collect swab samples for COVID testing from residents in Shijiazhuang, the provincial capital of Hebei, on January 6

The couple’s story comes as China is bracing a wave of coronavirus outbreaks across its frigid northeast, prompting additional lockdowns and travel bans ahead of next month’s Lunar New Year holiday.

Authorities have called on citizens not to travel, ordered schools closed a week early and conducted testing on a massive scale.

Chinese officials reported another 118 cases on Tuesday, with 43 of those in the province of Jilin. Hebei province saw another 35 infections, while Heilongjiang province bordering Russia reported 27 new cases.

A multinational team of investigators from the World Health Organization are currently in Wuhan undergoing two weeks of quarantine before beginning field visits in hopes of gaining clues into the origins of the pandemic that has now killed more than two million people.

The Daily Star’s FREE newsletter is spectacular! Sign up today for the best stories straight to your inbox MacKenzie Scott,

Female plane passenger is tied to her chair in Russia

7th Heaven always had a lesson. The popular family drama, which ran for nine seasons, followed the family of a minister.