Athens: The European Union must impose "meaningful" sanctions on Turkey unless Ankara pulls its maritime assets from disputed areas in the eastern Mediterranean, Greek Prime Minister Kyriakos Mitsotakis said in an opinion piece published on Thursday.

Greece and Turkey are in dispute over sea boundaries in the region, in the latest manifestation of decades of friction between the two NATO allies. Turkey has dispatched a survey vessel in an area both countries claim is their own. 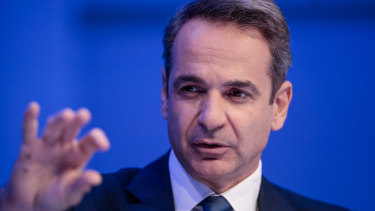 Kyriakos Mitsotakis, Greece’s Prime Minister, wants a solution to the stand-off with Turkey.Credit:Bloomberg

"We do need dialogue, but not when held at gunpoint. What threatens my country's security and stability threatens the well-being and safety of all EU member states," Mitsotakis said in an article published in the London Times, Germany's Frankfurter Allgemeine Zeitung and France's Le Monde newspapers.

This month, EU leaders are expected to specify their response to Turkey. If Turkey does not withdraw its assets, meaningful sanctions should be imposed, he wrote. 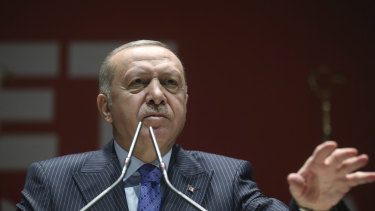 Turkey, he said, still had time to avoid sanctions and "take a step back".

"They should stand down, return to the table, and pick up from where they left off when they quit exploratory talks in 2016. And if we cannot agree, then we must seek resolution at The Hague," he said, referring to the international court for sovereign disputes.

French President Emmanuel Macron was due to discuss the European Union's strained relationship with Turkey later on Thursday with Mitsotakis.

Both are attending a MED7 summit on the French island of Corsica along with the leaders of Portugal, Spain, Italy, Cyprus and Malta.