Households are receiving messages from Evri saying presents they ordered more than three weeks ago are delayed or even lost.

It comes amid postal chaos after two days of Royal Mail strikes by more than 100,000 posties over a pay row. As a result, delivery companies have been forced to step in.

Consumers and small business owners said the Evri backlog is putting immense pressure on finances and called for it to be shut down.

One business owner said: ‘Honestly, they should not be allowed to operate.’

A mother claimed that her Evri parcel was found more than 60 miles from her Great Yarmouth home after a delivery driver’s wife took a van of packages to sell at a car boot sale.

The 38-year-old mother of two ordered clothes which were posted on November 13. Two weeks later, a stranger messaged her on Facebook with a picture of her parcel on a pile of others at the sale in Mildenhall, Suffolk.

She said: ‘I thought it might be the driver, so my husband phoned him and he said he was at a car boot sale in Suffolk and my parcel, still in its packaging with my name and address on, is being sold.’

Evri, formerly Hermes, changed its name this year after a string of scandals, such as depot workers seen throwing parcels around. 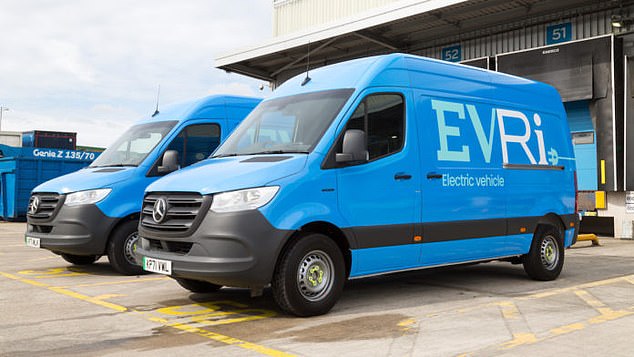 Darren Hilton, 51, who runs a fishery in Essex, says he has up to 12 parcels missing with Evri, worth around £800. ‘It’s just ruined our Christmas,’ he said. ‘Every single order which has been shipped by Evri, I don’t know where it is. Where are these parcels going? Have they got a depot for lost parcels?’

On December 9, Dr Richard Frenneaux’s doorbell camera captured an Evri driver stealing his parcel containing a humidifier seconds after dropping it off. He has reported the incident to police.

It said the car boot sale incident was being investigated, adding: ‘We are currently delivering more than three million parcels a day. However, like others in the sector, we are experiencing some delays to service due to record Christmas volumes, Royal Mail strikes, staff shortages and severe weather conditions.’