Another minister misses the WFH memo! Environment Secretary George Eustice reveals there is NO target for getting civil servants back to his Whitehall department despite ministers urging workers across the UK to ditch working from home

George Eustice today revealed no target has been set for the return of more civil servants to his Whitehall department despite ministers encouraging people across the UK to ditch working from home.

The Environment Secretary said this morning that ‘we don’t have a target’ for the return of staff and that the priority is to ‘make sure that it is safe for people to return’.

His comments come after Health Secretary Matt Hancock suggested last week that he did not care where his staff worked as long as they are productive.

Those remarks appeared to be at odds with the Government’s back to work message, with Boris Johnson expected to launch a drive later this week to get more people back to their normal commute. 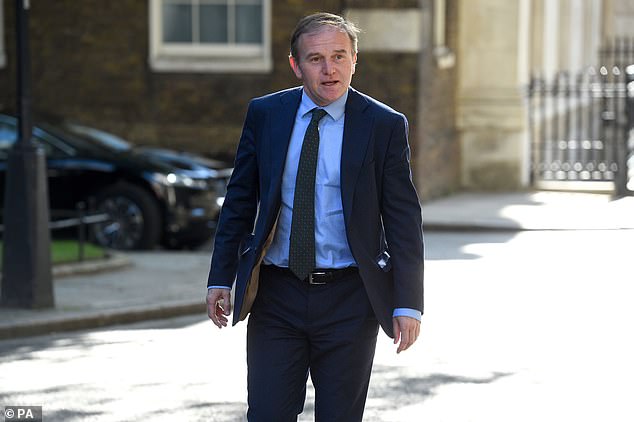 Ministers are increasingly concerned about the fate of struggling town and city centres and they want more workers to return to give a boost to businesses which are reliant on commuter footfall.

Some in Whitehall believe civil servants should set an example to the rest of the nation and stop working from home.

But Mr Eustice said this morning he does not have a target for the number of staff he wants back at their desks in his department next month.

He was asked during an interview on BBC Radio 4’s Today programme whether the Department for the Environment, Food and Rural Affairs had a target for staff returning after the bank holiday.

‘We don’t have a target other than to make sure that it is safe for people to return to work, and that does require, for instance, fewer work stations,’ he said.

‘So not everybody – we won’t get a 100 per cent return-to-work – but we want to ensure that as many people as possible are able to return to work, even if it’s for some days a week so you don’t have an entire team in everyday.

‘That’s the kind of approach we’ll be taking and it’s the sort of approach that I’m sure many other businesses will be too.’

Ministers have faced accusations in recent days of sending out mixed messages on whether people should stop working from home.

Mr Hancock told Times Radio last week that he cared about how effectively people work rather than their location at home or in the office.

‘What I care about is how effectively people work, obviously people should come back to the office if that is what they need to do their job, obviously employers need to make sure the offices are Covid secure,’ he said.

Business Secretary Alok Sharma has been leading calls for firms to get workers back into offices.

But he was accused of hypocrisy after it emerged just five per cent of his own department’s 1,800 staff had arrived at its central London HQ on one day last week.

Just 95 staff were seen entering the Whitehall building one morning even though the Government has urged the nation’s workforce to physically return to workplaces.

Chief Secretary to the Treasury Stephen Barclay said yesterday the Government was ‘keen’ for people to stop working from home where possible. 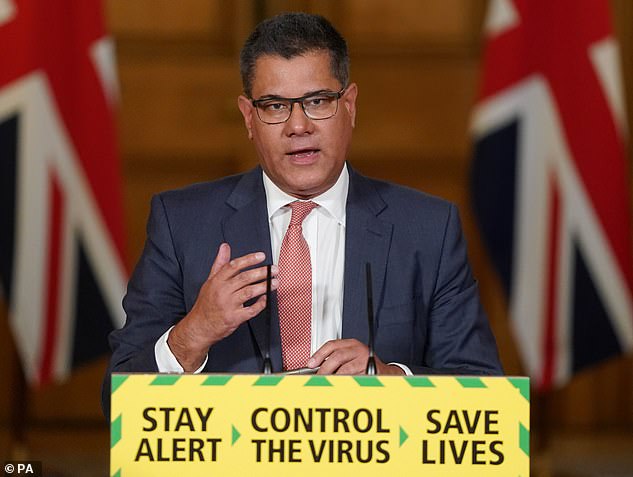 Business Secretary Alok Sharma has led calls urging firms to get workers back to their desks. But he faced accusations of hypocrisy after just five per cent of his own department’s 1,800 staff arrived at its central London HQ

Mr Barclay told Times Radio: ‘We are keen to get people back in the office. We think that’s best for the economy to get back to normal as part of our recovery.

‘The whole purpose of the furlough scheme has been to retain that link between the employee and their business.

‘Obviously, people coming back as the furlough scheme starts to unwind, back into the workplace in a more active way. So, we are keen to see that take place.

‘Clearly, these are conversations that businesses will be having with their staff.’

Critics have questioned ministers’ insistence that workplaces are safe.

Lawrence Waterman, chairman of the British Safety Council, said: ‘I think many of us don’t understand why there’s such firm advice with ministers stating that workplaces are now safe – there’s no evidence for that.

‘Indeed, there is an argument which says that workplaces are so rarely inspected with the cuts that have occurred to the Health and Safety Executive and to local authorities over the last 10 years, that it’s probably more likely that you’ll win the lottery than be visited by an inspector.’