An intruder is threatening Melbourne’s beloved pair of falcons and their future offspring perched on a Collins Street office building, with a looming fight set to determine the raptor king of the CBD.

Rare peregrine falcons have nested on a ledge high up on 367 Collins Street since 1991, with a livestream of the birds’ shelter developing a legion of followers – particularly during Melbourne’s COVID-19 lockdowns – since it launched five years ago. 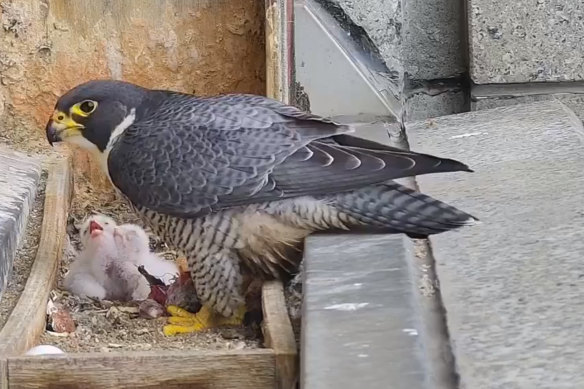 A female peregrine falcon feeds her baby chicks at 367 Collins Street in 2019.

Victorians tuned in to see the raptors incubate, raise chicks and even squark with puzzlement during last year’s earthquake on the Mirvac-owned building, with the same male and female nesting on the skyscraper for the last five years.

However, Dr Victor Hurley, the founder of the Victorian Peregrine Project, said a second male is now lurking near the current couple, disrupting egg incubation and jeopardising this year’s brood as it tries to kill the resident male and take its place.

Hurley said falcons are a fiercely territorial bird of prey that eat smaller birds and are usually only lost from a regular nesting site if another adult peregrine arrives and kills a bird of the same gender.

This year, he says, the regular female falcon did not return when the birds arrived in late August, and volunteers began noticing “odd behaviour” from the resident male at the start of September as it stopped resting on its eggs and wouldn’t provide food to the mother.

On Thursday, Hurley said a volunteer took photos that showed the distracted resident male had actually been dealing with an intruder, confirming reports that two raptors had fought on the banks of the Yarra River near Federation Square two weeks ago – a tussle that ended in a draw.

“The incoming male hasn’t been successful, yet, and the resident male, for reasons I don’t understand, hasn’t been able to chase off or kill this intruder,” Hurley said.

“But the downside is the female is left with all the incubation duties, and it appears possibly having to get her own food. I think what’s happening is every time her male brings her food, the intruder intercepts him and steals it off him or forces him to drop it.”

Hurley said this interrupted incubation puts the pair’s eggs at risk of not hatching when they are due at the start of October.

He added that it was “really unusual” for the incoming bird to arrive after the eggs had been laid and pester so close to the existing bird’s nest, and that others would opportunistically wait well outside the local bird’s territory.

“In all the years I’ve been looking at it, I’ve not come across something like this, where they’ve tolerated this bird for so long. He’s even landed on the next ledge … he’s really cheeky and getting away with it,” Hurley said.

“I suspect by next season we’ll have one male.”

The looming fight above Melbourne’s streets

Hurley said the current battle between the two males was a cold war, with the intruder waiting to pounce on the resident male if it drops its guard.

He said when a previous female was killed by an intruder years ago, their fight lasted more than seven hours, leading concerned building managers to call Hurley after the raptors spent hours screaming and yelling.

Hurley said he suspects some fights are shorter, but with both falcons using the same dive-bombing runs, sharp talons and neck-snapping beaks to kill smaller prey, they are often evenly matched.

“That’s really hard if you’ve got another peregrine because they know exactly what you’re trying to do. So, it often ends up as a bit of a grappling match,” Hurley said.

Almost 40,000 Facebook users are monitoring the falcons at the 367 Collins Falcon Watchers page, with many calling the resident seven-year-old male “Dive Bomb Dad” as he tries to fend off the intruder.

The winner will claim all of Melbourne’s CBD as its own, alongside the resident mother, with the next closest nest in Altona.

“That’s why people are all fascinated by the Game of Thrones intrigue that’s going on,” Hurley said.

When asked to pick a winner, Hurley said the slightly larger and younger three-year-old intruder might have a slight edge.

“In any sort of wrestling match, you’re going to put your money on the larger bulk to probably succeed ultimately,” he said.