Fury grows over football crowds as parents miss out on sports day: Ministers face backlash over plan to spare quarantine for thousands of football chiefs so they can attend Euro 2020 games at Wembley

A Tory backlash is growing against the plans to spare quarantine for thousands of football bigwigs so they can attend Euro 2020 games at Wembley.

Conservative MPs said it was ‘ridiculous’ that VIPs would be allowed to fly to the UK without isolating at the same time as parents are banned from watching school sports days.

As anger grew over the special treatment being arranged for up to 2,500 chiefs from Uefa and Fifa as well as big business sponsors, even a minister admitted some Covid rules looked inconsistent. 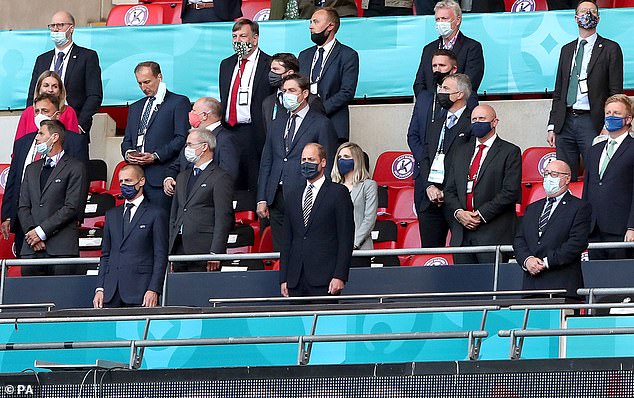 A Tory backlash is growing against the plans to spare quarantine for thousands of football bigwigs so they can attend Euro 2020 games at Wembley (pictured, Prince William and Uefa President Aleksander Ceferin at Wembley stadium on June 22) 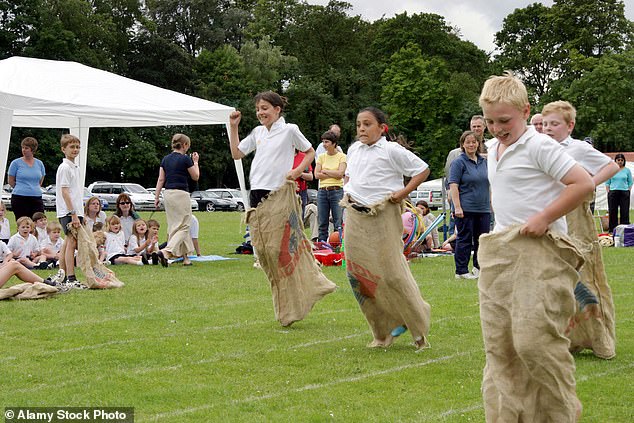 And another row was brewing after it was announced that, in addition to 60,000 spectators at Wembley for the Euro semis and final next month, a capacity 140,000 crowd will see the British Grand Prix at Silverstone, with even world champion driver Lewis Hamilton warning it looked ‘premature’.

Ex-minister Steve Baker added: ‘One rule for the elite. Another for the rest of us.’ Discussions are still taking place over how many visiting dignitaries will be allowed to avoid the 10-day quarantine rule next month. But changes to Covid regulations have already been quietly made to allow the controversial move. 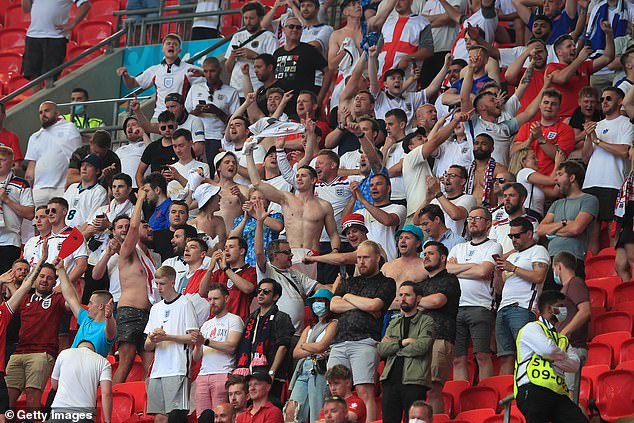 Wembley will host 60,000 supporters for the Euros 2020 final on July 11 (pictured, England supporters at Wembley Stadium on June 13)

Yesterday Downing Street did not rule out that even executives from ‘red list’ countries such as Turkey could be waved through.

It said details would be announced ‘in due course’.

It is unclear if ordinary football fans from the continent will be allowed to attend the Wembley final – or next week’s clash between Germany and England – under the exemption.

Environment Secretary George Eustice admitted the rules could look unfair, but he told ITV: ‘There is a difference in magnitude between finding a way to facilitate a single event, and making a change that affects the whole population and would affect things in thousands of schools.’

The Department for Education insisted school sports days can go ahead, with parents watching, as long as they are risk-assessed and have Covid safety measures.

Meanwhile, singer and football fanatic Ed Sheeran put an impromptu acoustic concert for the England team at their training camp in Burton, Staffordshire on Wednesday. The players were said to be ‘thrilled’. 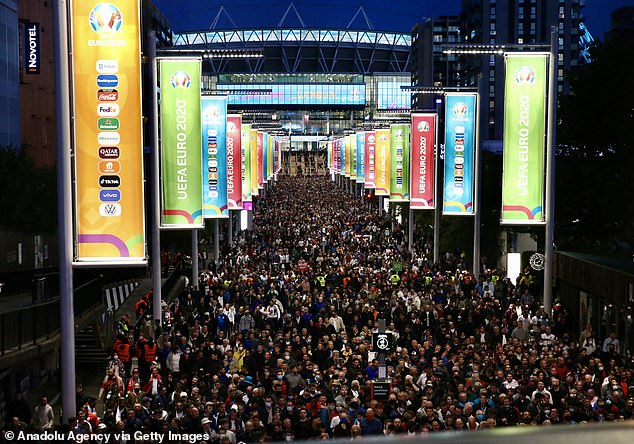 Yesterday Downing Street did not rule out that even executives from ‘red list’ countries such as Turkey could be waved through (pictured, England fans gather outside Wembley after defeating the Czech Republic 1-0 on June 22)

The BBC will cover major events at the Tokyo Olympics like the 100 metres from a base in the UK with presenters staying away from Japan because of Covid.

The corporation yesterday unveiled its TV and radio line-up for the Games which begin on July 23.

Unlike previous Olympics, it will not have a studio in the host city.

Top athletics commentator Steve Cram will call the action from TV pictures while presenters, including Gabby Logan, Clare Balding, Hazel Irvine and Dan Walker, will work out of Salford in Greater Manchester.

They will be joined by pundits including Olympic greats Michael Johnson and Dame Jessica Ennis-Hill.

A handful of reporters, such as rowing champion Sir Matthew Pinsent and former swimmer Sharron Davies, will be in Tokyo.