Furious passengers have complained of social-distancing ‘chaos’ at Heathrow as huge crowds of holidaymakers are left ‘bumping into each other with no staff managing massive queues’.

Footage posted to Twitter on July 19 shows people standing close to each other and wearing face masks while waiting in a long line at the airport’s Terminal 2.

The video was captioned: ‘Heathrow Airport T2 entry has no social distancing… long queue with people bumping into each other, no system in place and where are your staff managing this? 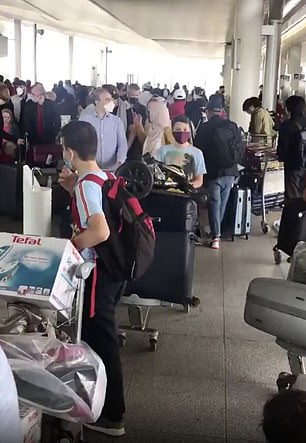 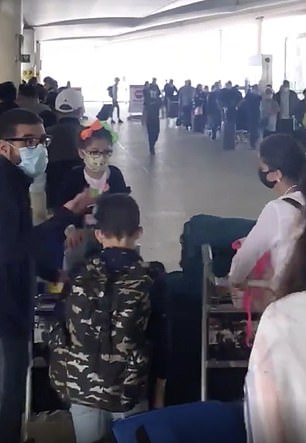 Footage posted to Twitter, above, on July 19 shows people standing close to each other and wearing face masks while standing in a long line at the airport’s Terminal 2 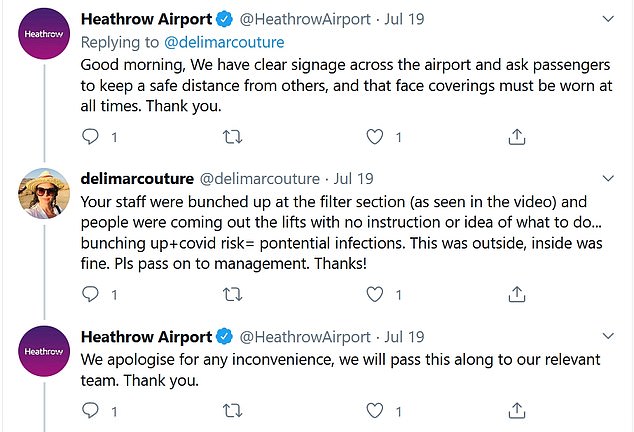 Heathrow airport responded to the footage, reminding they have ‘clear signage’ and ‘ask passengers to keep a safe distance from others’, with face coverings mandatory

‘Chaos with people coming out of the elevators and zero instruction.’

The airport commented: ‘We have clear signage across the airport and ask passengers to keep a safe distance from others, and that face coverings must be worn at all times.’

But the social media user claimed staff were ‘bunched up at the filter section’ and passengers were ‘coming out of lifts with no instruction or idea what to do’.

In response, Heathrow Airport said: ‘We apologise for any inconvenience, we will pass this along to our relevant team. Thank you.’

Another social media user tweeted images of a long queue of passengers at border control, captioning: ‘Welcome to Heathrow… please join the queue.’

Heathrow’s chief executive John Holland-Kaye has previously said social distancing will not work at airports due to the ‘lack of space’.

In May, he wrote in The Telegraph: ‘Forget social distancing – it won’t work in aviation or any other form of public transport, and the problem is not the plane, it is the lack of space in the airport. 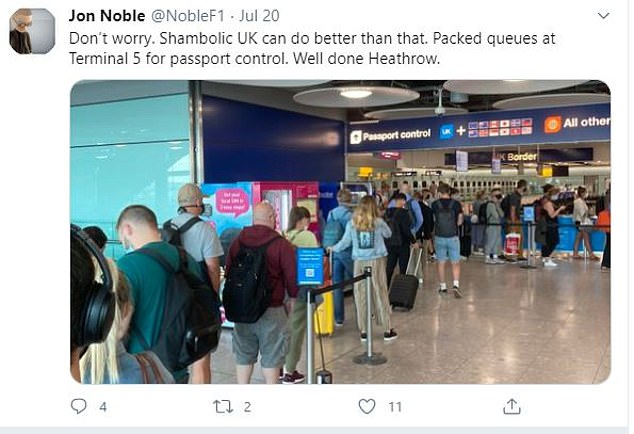 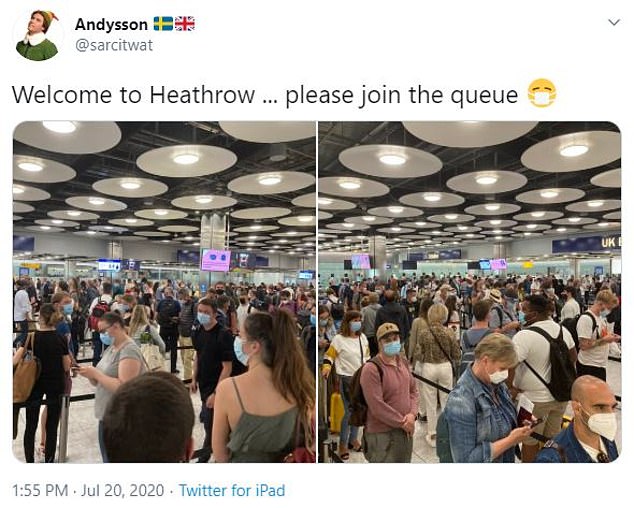 ‘Just one jumbo jet would require a queue a kilometre long.’

He then suggested other possible measures to prevent the spread of the virus, such as health checks upon entering the terminal, surgical masks, less contact between passengers and staff and ‘fantastic levels’ of hygiene at the airport.

A spokesperson for Heathrow Airport told MailOnline: ‘We are aware that some passengers are arriving several hours in advance of their flights which is not necessary and causing some congestion issues.

‘To prevent this, passengers are advised to arrive no earlier than 2 hours before a short-haul flight and 3 hours for long-haul journeys.

‘Our teams are on hand to support where possible, but we recognise that there are points in the journey where social distancing is not always possible.

‘That is why face coverings are mandatory in terminals, as they help to reduce the risk of transmission at the airport.’