Home » World News » From the Archives, 2002: Federation Square, the new heart of Melbourne

The new heart of Melbourne

Federation Square has forever changed the size, shape and feel of our city, writes William Birnbauer. 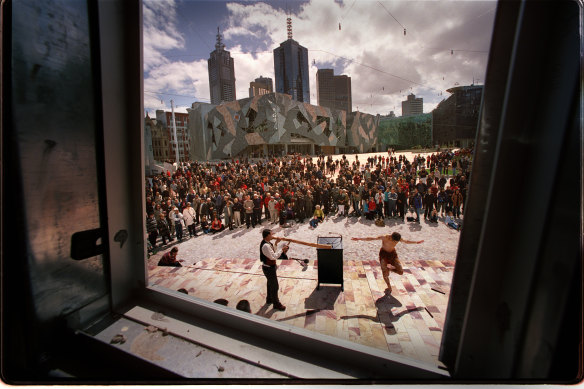 Instantly recognisable, Federation Square is the new face of Melbourne. Its facade, spellbinding, curious and ingenious, will signal Melbourne as the Opera House signals Sydney.

Already we love it or hate it but can’t ignore it. We can’t stop staring because its structures are so surprising and confronting. We have never seen anything like it before.

“Fed Square” embraces all the city’s inner tensions: between old and new, between artistic freedom and the constraints of funding and politics. Sitting opposite a cathedral, a pub and a railway station, it is a gathering place for our diverse cultures. Its grounds, according to one historian, are both sacred and secular.

The square expands the city to its natural boundary. “Perhaps the biggest thing that Fed Square does is that for the first time in over 150 years, it has actually changed the Hoddle grid,” says Federation Square boss Peter Seamer. “What it’s done is to extend the city one block to the south, thereby making Melbourne a riverside city. It’s making the city move to the river because it’s been blocked by that railway line.”

Little in Federation Square is square. “We called it a square, which is an interesting thing because there aren’t any square angles in it at all,” observes urban designer Kim Dovey.

The builders grappled with its unique design. “Nothing is square, nothing is easy, everything is irregular,” echoes site supervisor Mick Doolan. 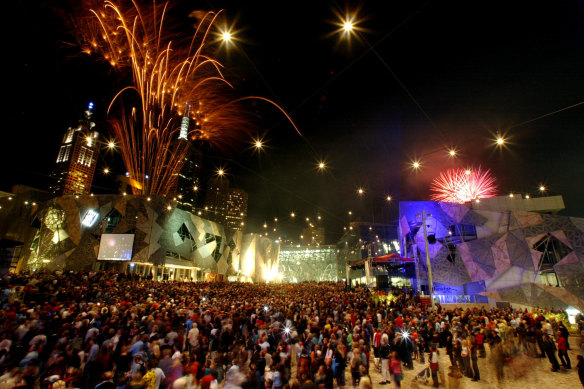 Mark Prentice, who managed the project for Multiplex Constructions, says: “It’s not a straightforward, typical commercial project. It’s a monument. Nothing here is designed to be functional, it’s designed to look and feel.”

At first Victor Perton hated it. Now, the Liberals’ innovation and technology spokesman says: “I suspect it’s growing on me. I think my personal feeling now is we have to drive out more projects that challenge us with modern design.”

But Melbourne’s architecture has always pushed the envelope. From the outset, says RMIT architecture professor Leon van Schaik, Melbourne wanted to be a great city, competing with and not apeing the great cities of civilisation. “In my view Melbourne has somehow imbued Federation Square with its own architectural tradition,” he says.

Standing on the cobblestone plaza opposite St Paul’s cathedral, it is easy to forget that the entire 3.8-hectare site props on a concrete and steel deck over 12 rail lines. As a heavy forklift rumbles by, the ground quavers alarmingly.

“The whole deck is built on 4500 springs and rubber pads to reduce vibration from the trains below,” explains Mr Seamer.

Also easy to forget is that for three decades from 1967, the appalling Gas and Fuel towers at Princes Gate shut the city off completely from one of its greatest assets, the Yarra River. 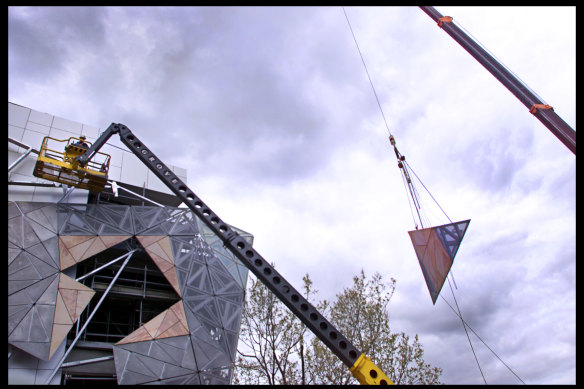 Installation of the final panel of the Federation Square facade 17 September, 2002.Credit:John Donegan

The square’s plaza, covered with more than 467,000 cobblestones speckled red, orange and purple, reaches toward the Yarra from the gateway corner of Flinders and Swanston streets. It can hold more than 10,000 people.

Federation Square is as big as a city block and houses about a dozen buildings, different yet linked and coherent. “I don’t think you’ll be able to say, ‘I’ll meet you at Federation Square.’ You’d have to say which part,” Kim Dovey says.

The main buildings are the spacious new galleries of the $80 million Ian Potter Centre; the NGV Australia; the Australian Centre for the Moving Image – a mecca of screen culture; and most stunning of all, a crystalline-steel-meccano atrium – a kind of glaze-covered street – which on its Flinders Street entrance hangs unsupported like a massive rangehood. When the construction props were removed, the 142-metre-long cantilevered atrium dropped two centimetres, a lesser fall than expected. The site’s 26 tenants include television station SBS, the Melbourne Visitors’ Centre, Paul Mathis’ Transport pub, a wine bar, and a variety of shops, restaurants and cafes.

The most controversial building is not there. The western shard, in the architects’ original plan, stood more than 20 metres tall on the north-west corner, and with the eastern shard would have framed St Paul’s Cathedral, integrating it into the overall design.

But following a State Government decision in October 2000, to preserve views of the cathedral from St Kilda Road, a smaller green-tinted glass building that looks like a fish tank occupies the site. At one stage, Premier Steve Bracks had supported a flagpole or fountain for the corner. The fish tank is nothing like the rest of the square. It leads to an underground visitors’ information centre, operated by the City of Melbourne.

Mr Seamer says the visitors’ centre “is basically exactly the same as the shard, only not as tall. If you stuck another two levels on it, you’d have a glass shard.” But one of the square’s architects, Peter Davidson, says the decision-making processes leading to the shard being cut down in size were deplorable. However, after years of fighting, he is ready to move on. “I don’t think it’s our problem any more. I think it’s a problem for the city.” 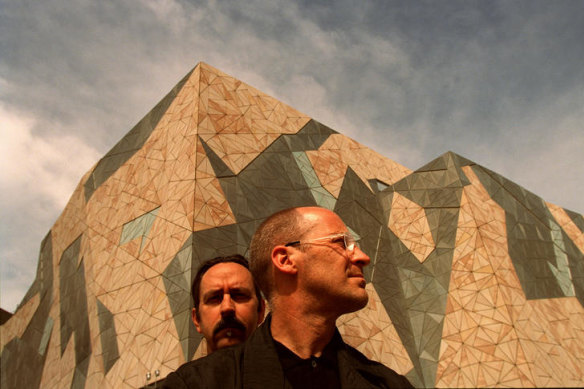 Fellow architect Don Bates says a common, unprompted response from visitors to the square is that the corner “doesn’t look right”.

He says: “The hope is that as the project becomes open and available completely to the public, that more and more people will recognise that, and particularly those people who had supported the Government and their decision to reduce the height of the building.”

Kim Dovey, who is associate professor of architecture and urban design at the University of Melbourne, says cities reflect their processes and that the shard decision “transparently reflects the appalling politics of that decision”.

Following cost blowouts and months of disagreement and deadlocks over the shard, the State Government in September 2000, established Federation Square Management Pty Ltd under Peter Seamer to manage the project.

Even though the architects – from London’s Lab architecture studio and Bates Smart of Melbourne – had won an international competition, beating 177 entries to create the square, Peter Seamer’s team took a tough line and disempowered the designers, according to Mr Davidson.

“What happened after the shard was an endless series of changes and impositions that we had to continually fight and struggle against.” he says.

But government officials say that before the company was created to manage the project, in effect there was no direction or control. It had run over time and over cost.

Mr Seamer concedes that since Federation Square Management became involved, it started “making more demands on the useability” of the site.

The cost of Federation Square was originally estimated at $110 million. “That was a joke,” according to Mr Seamer, who says the first realistic estimate was $240 million, a figure that did not include the Gallery of Australian art. The latest cost is $430 million to $450 million.

Will it work? Kim Dovey says the biggest concern is the prospect of an empty square. “The worry is why will people go there once they’ve been once or twice? What will attract them back? It won’t be ‘Let’s go to Federation Square to look at the stone facades.’ Architecture doesn’t have that type of pulling power.” It has the art gallery and the Centre for the Moving Image, but may need more, he believes.

Peter Seamer does not doubt Melburnians will use the square, but not everyone will like it. “At least they’re talking about it. The huge mistake at Fed Square would have been to build something that looked like a suburban shopping centre, like Southland.”

The project may at last give Melbourne the city square it has wanted since the 1850s. Author and historian Andrew Brown-May believes it could be the realisation of a dream, “the practical culmination of a century and a half of vision and revision”.

Writing in Federation Square: A Place in History, he says: “This new square promises to be a space for activity as well as architectural significance. It is sited in the logical place, at Melbourne’s southern gateway, an area alive with history.”

Unlike the area opposite Melbourne Town Hall, which is exposed to traffic fumes, Federation Square, like St Mark’s square in Venice, “folds in on itself”, making it an ideal location, Mr Seamer says.

The architects’ project portfolio promises that “Federation Square will be a reaffirmation of the original interactive nature of civic existence. Rather than a closed enclave of controlled and regulated activities, this project creates a network of animated, emotive and enlightening experiences.”

The architects’ idea was that the buildings would be a metaphor for pulling together disparate elements – the states – while allowing them to retain their individuality.

Mr Dovey says another interpretation could be that the square celebrates not the states but the federation of differences of culture and beliefs, for which Melbourne is known.

The square was conceived in 1996 as a celebration of the centenary of Federation. As it turns out, it is opening 22 months late, which somehow seems to accord with another Melbourne tradition.