Home » World News » From the Archives, 1990: Mandela’s appeal to Melbourne

An appeal for help in building new South Africa

Nelson Mandela ended the public side of his Australian visit last night with an appeal for help to build a new South African social and political system. 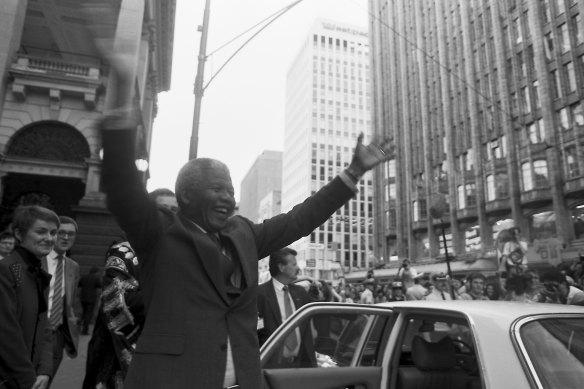 Nelson Mandela arrives at Melbourne Town Hall on a tour of Australia in 1990.Credit:Craig Golding

He delivered a sober message to a cheering crowd of about 6000 at the Sports and Entertainment Centre, speaking of the legacy of apartheid: a lack of housing, unemployment, low wages, a poor health system and a chaotic education system.

“The effects of these conditions will remain with us long after apartheid is dead and gone.”

Mr Mandela said that in Melbourne there were many South African exiles. “Doubtless they are now imbued with the values of respect, equality, justice and peace which you so amply demonstrate,” he said. “Soon we shall call them back to come home and assist in the building of a new South Africa.”

Mr Mandela was entertained by performers from different origins, including Aborigines who moved from traditional music and dance to a rock ballad.

His welcome was tumultuous, with flags and placards waving and cries of “Viva, Mandela.” The applause persisted until he broke with the program and mounted the stage. 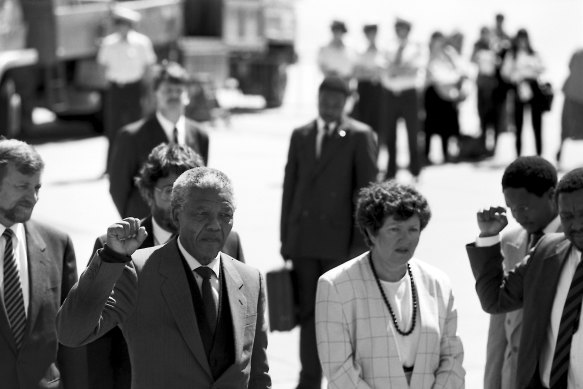 Nelson Mandela is greeted by Joan Kirner at Melbourne Airport in 1990.Credit:Craig Golding

The Foreign Minister, Senator Evans, was booed by several listeners as he began his speech, in which he described Mr Mandela as one of the truly great men of this and any other age. There were several other catcalls, apparently as a protest for Aborigines.

Mr Mandela also spoke about the recent “so-called ‘black on black violence’” as one of the tremendous difficulties ahead.

“But with the same determination and the spirit of no surrender that our people have shown in the face of extreme repression we will not be diverted from the path of freedom.”

The shooting could start again, rally is told

Mr Nelson Mandela yesterday told a rally of union supporters that the African National Congress would not hesitate to resume its armed struggle if the South African Government dragged its feet on reforms.

Speaking to an ecstatic audience at the Melbourne Town Hall, Mr Mandela said the ANC had agreed to suspend the armed struggle, but this was fundamentally different to calling it off.

“All we have done is to say, to our men: ‘Please remain in the barracks. Don’t shoot,‘” said Mr Mandela. He said a tradition of militant resistance in South Africa had produced a new generation of people who were prepared to fight with their lives.

“If the Government shows a breach of faith and decides to sabotage the peace talks,” he said, “or if they decide to drag their feet, we will without hesitation call out our men and continue the armed struggle.”

Mr Mandela’s conditional support for violent opposition to apartheid was received enthusiastically by union supporters, as was his defence of the South African Communist Party.

In a speech that covered the ANC’s links with the labour movement, Mr Mandela said the communists had strongly supported the anti-apartheid struggle and did not deserve to be isolated.

Mr Mandela praised Australian trade unions for their support and recalled industrial action by dock workers against South African ships going back to the 1950s.

The ANC’s deputy leader was presented with cheques by the ACTU secretary, Mr Bill Kelty. He left the stage as the Trades Hall Council choir sang the ‘Internationale.’